Our San Franciscan colleague's lid appears to me to be significantly taller.

Check out these scans of a 1920 Montgomery Ward catalog

That snap brim looks almost exactly like the Dobbs Twenty I was lucky enough to get (with very clean original box) for $25.00 in a thrift shop. Near new condition in long oval and fits as if custom made. Yours shows more of a velour surface, but otherwise its a match. Of course I know mine doesn't date back to the 20s. Maybe the sixties, I'm thinking. Looks good brim up or brim down. I hate to wear it too much because I don't want to put extra wear on it. I plan to live to 100 and want it to last. PS I think it will. Very clean soft felt. Roosevelt usually wore his hat brim up with his cigarette in its holder jutting out. Sign of openness and goodwill. Brim down over the eyes, sign of a private eye on the trail of a ruthless killer.

JackieMatra said:
Our San Franciscan colleague's lid appears to me to be significantly taller.
Click to expand...

The difference in profile between a size 7 and a 7 1/2 long oval. Perhaps you'd like to contribute some pics?
T

kaosharper1 said:
I had Art Fawcett make up the hat in my avatar from the late 1920s or early 1930s. It was popular among the literary bohemian crowd. You can see it in my avatar, but the photo its based on is here:

I wonder if that style isn't related to the one worn by Oscar Wilde in the early 1890's. James Joyce , around 1904, also mentioned his "Latin Quarter" hat in one of his writings.

tropicalbob said:
I wonder if that style isn't related to the one worn by Oscar Wilde in the early 1890's. James Joyce , around 1904, also mentioned his "Latin Quarter" hat in one of his writings.
Click to expand...

I have seen them mentioned as Sombreros. They also wore Austrian Velours this way. I posted some photos at the link Kaosharper1 provided.

Here is a 1930s JHS Seal Austrian Velour setup in a similar way. 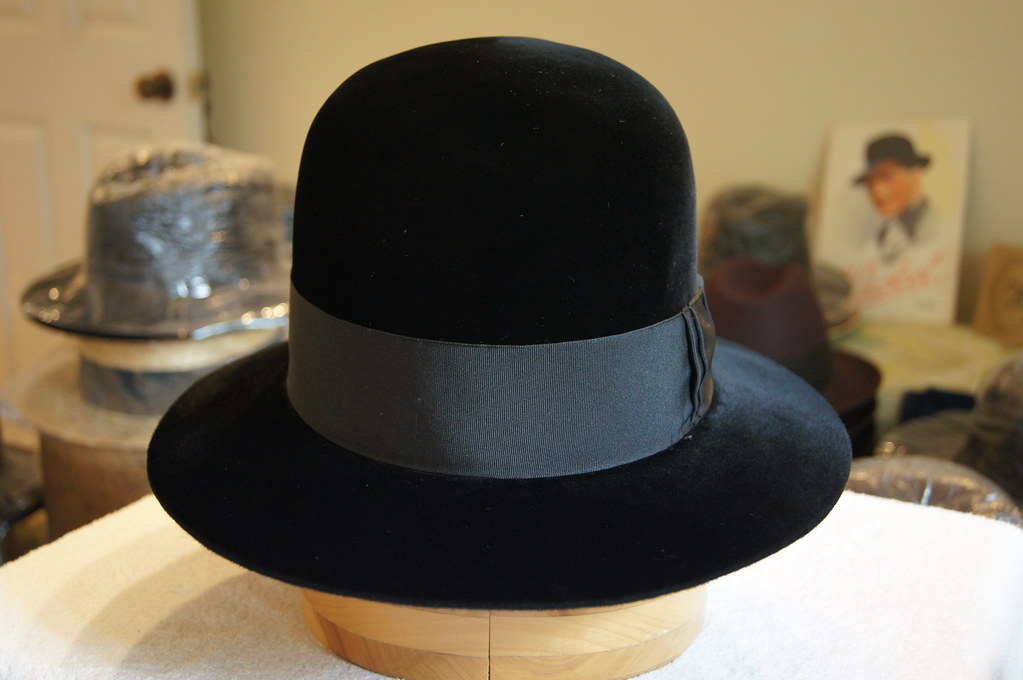 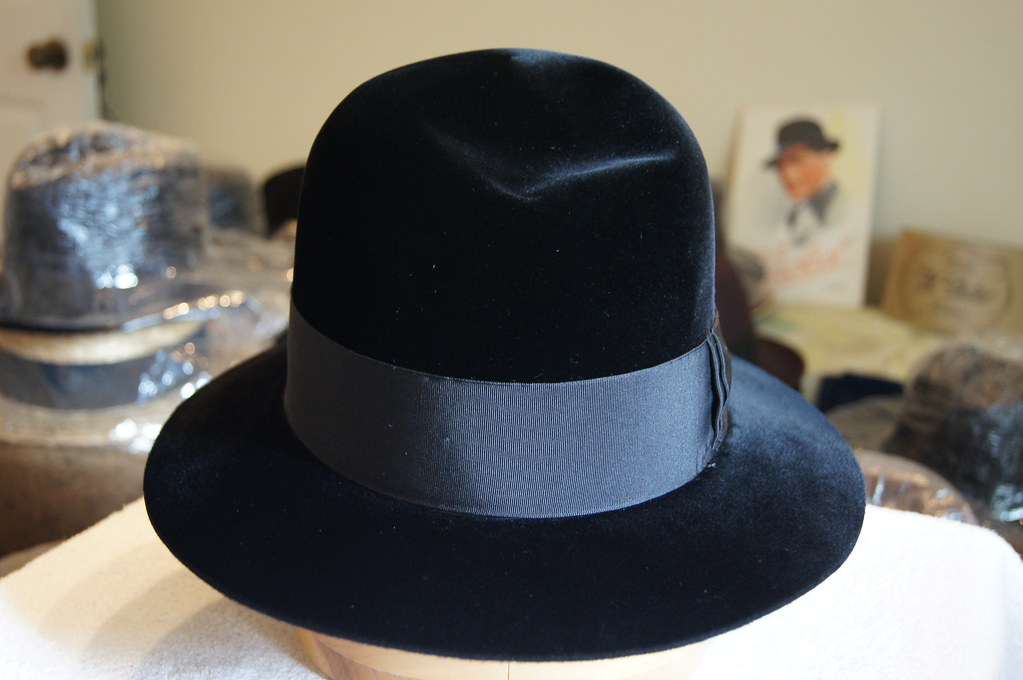 Wyndham Lewis wearing a black Austrian Velour in this manner. 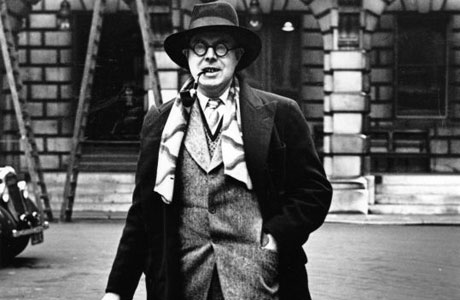 I will talk a photo wearing my JHS Seal Velour setup this way.
Last edited: Jun 10, 2015
B

Somes notes about brim widths from the late-1920s. Most of these articles are from a news service that are picked up by papers across the country.

“New Color Creations in Spring Hats”
Snap and Curved Brims
“The felt hat of other years continues to be the leader, while sharing popularity with the derby. Felt hats in fedora shape, and single crease styles, will be worn this year. The crowns are a trifle lower and noticeably smaller; while brims are either the snap variety or curved. Both bound and raw edges will be seen.”
“New Color Creations in Spring Hats.” Ogden Standard Examiner. 24 March 1927, p. 16.


“Fall Hat Vogue is Narrow Brim”
When Mr. Well Dressed Man, debonairly sauntering down the street, doffs his hat to Milady, it will be a headpiece with high tapering crown and rather narrow brim.
If he is a college man the brim may be only 2 1/8 inches wide. If he is a bit more conservative, the width will probably be 2 3/8 inches. Of course exceptions to this general tendency are found in hats specially designed for men with round, rather full faces.
Snap-Brims Popular
The snap-brim hat with the raw edge is still leading in popularity, the manufacturers’ sales indicate. Next comes the hat with a narrow welt-edge brim, single creased. And third is the Homburg, with a bound edge in most cases. The Homburg is likely to show gains as the cold weather comes on, for it is usually somewhat heavier and more substantial than the other varieties. For those who care to spend somewhat more than average on headgear there are the well-known lines of imported hats with their luxurious beaver and velour materials; these latter are, of course, in the conventional fedora shape. In wearing their chapeaux, most men prefer the customary crease down the center. There are some, however, who incline to that negligee effect known and the diamond shape, where four dents in the crown give the hat a lozenge shape.”
“Fall Hat Vogue is Narrow Brim.” The Daily Republican (Rushville, IN). 3 October 1928, p. 8.

I took these photos of me wearing (not a good idea considering the high temperature) my JHS Austrian Seal Velour in the Bohemian Sombrero manner. As you can see they are bit floppy because the felt is so soft. 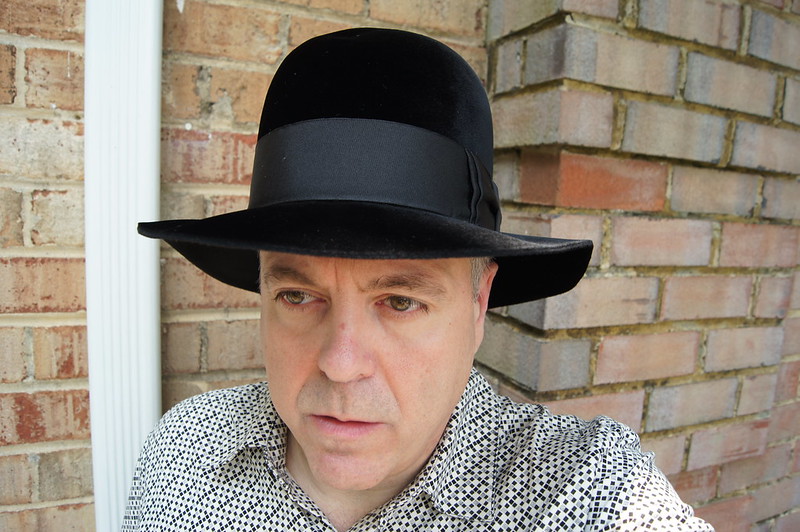 They will easily take any type of dent or crease. 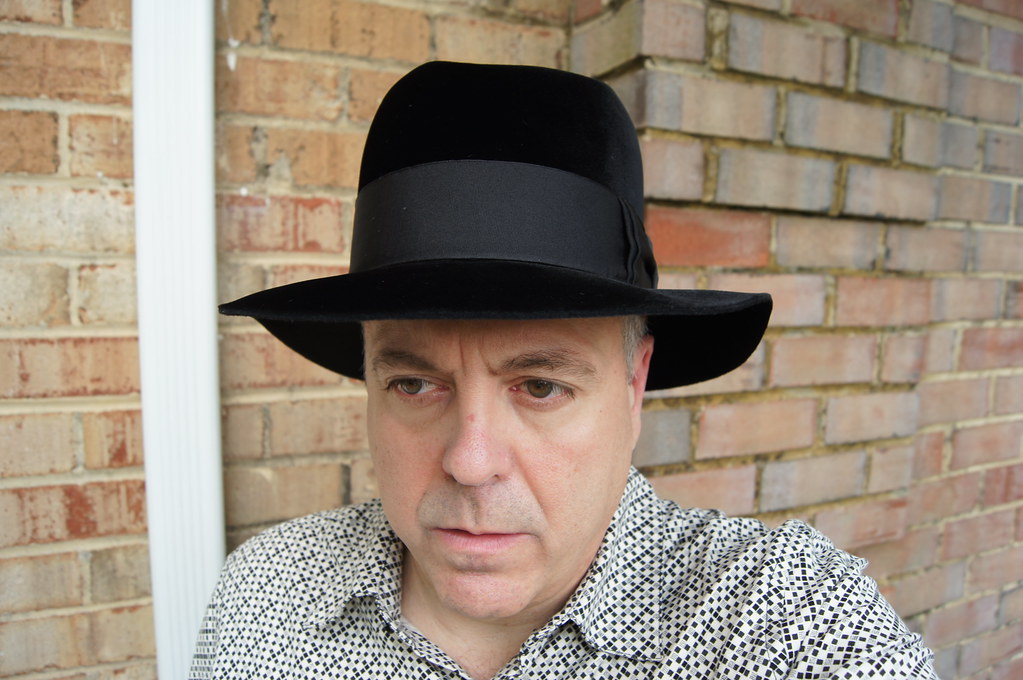 I will talk a photo wearing my JHS Seal Velour setup this way.
Click to expand...

that bash is ridiculously fantastic ... I love it

if I only had the huevos to wear something like that

You can see something similar in the photos I just posted. Old Austrian Velours can be extremely floppy. You can put all kinds of strange dents into them (some unwanted).

This is a photo only contribution to the discussion.
The character, often portrayed with his hat. Giacomo Puccini Italian (1858-1924) opera composer.
I chose a gallery of portraits of the composer to show what was the Italian hats fashion in the era between the late nineteenth century and the end of the 20's.
They are called "cappelli di lusso" Puccini in the early 20's Puccini, Simoni e Adami around 1910
Please note the variety of hats worn by Italian men of high society.
It is interesting that they are so different from today hats or from the images we have of them.

Another interesting evolution of the hats. Arturo Toscanini (1867 - 1957)
A portrait in his youthness, note the hat very tyrolean In his middle age, a classic homburg Daniele, Great photos! The hat styles are very similar to what you see in Germany and Austria (also France, ect.) in the same time period. These are the hat styles that came over to America from Europe. Yes there were changes along the way but this is where they came from.

Puccini and Toscanini, heard of those gents. Very dapper dressers as well as composers.
Thanks for the pics Daniele.

Musicians.
Puccini was a composer.
Toscanini was a conductor and cellist.
T

mayserwegener said:
Daniele, Great photos! The hat styles are very similar to what you see in Germany and Austria (also France, ect.) in the same time period. These are the hat styles that came over to America from Europe. Yes there were changes along the way but this is where they came from.
Click to expand...

This is really fascinating to me. I'm woefully ignorant of the whole subject, but when I bought my first Borsalino (a Bellagio) a few years back I thought there was something very Italian, and slightly Tyrolean, about the style. I can see the family resemblance in the Toscanini hat, even if it's a bit removed.

I'm loving these old pics!
B

This post seems to fit better here than in the Bowler/Homburg thread that we talked about it in. So, here goes:

Thanks to Robert's excellent work in this thread, we know that men's fedoras date back to 1882 and the original production of Sardou's play of the same name. Throughout the decades there have been women's hats known as fedoras, though I doubt there was every any confusion on the part of the public as to which hat was which. Men's fedoras have existed from the beginning, so the conventional wisdom that the men's fedoras evolved from a woman's hat is flat-out incorrect. The only thing in common that they seem to have had is that they are both considered soft felt hats.

That brings us to the definition of a fedora. The modern perspective of a fedora is broader than that of the original hat, but less so than you might think. The original fedoras were soft felt hats with a center crease and seemed to have often have had a front pinch. Early fedoras were tapered. Their ancestor was European, and fedoras are sometimes equated with Alpine hats through the 1920s, though not always. The fedora was defined by its soft felt crown, rather than by its brim size, brim shape, or brim curl. Those aspects could vary in relation to a fedora crown.

We know that manufacturers typically did not use fedora as an industry term, but retailers did, most likely responding to the popularity of the term among the hat-buying public. It is assumed that retailer adopting lagged slightly behind public usage, as is common today. Newspaper advertisements from the period in question should give a fair estimation of the public usage of the term fedora.

This advertisement from 1897 shows that fedoras were, at least on occasion, offered without a rolled or curled edge: Up until the mid-1920s the retailers usually drew a distinction between snap-brim hats and Fedoras, though I have found exceptions. Daily Independent. September 14, 1926, p. 6. This one mentions "Fedora shape," and distinguishes it from brim styles. As we move into the mid-1920s, though, things begin to change, as will be seen in my next post.