Some ads, as early as 1917, begin describing snap-brim fedoras. Eaton's, advertising in the Winnipeg Tribune, uses the term consistent, as does J. C. Penney in many U.S. papers.
There are many other ads available, these are just representative examples. 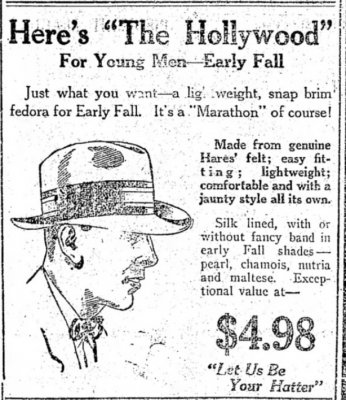 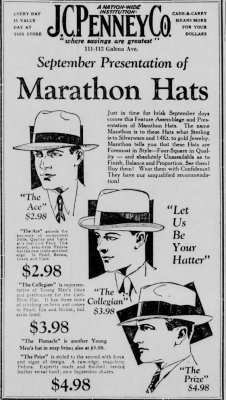 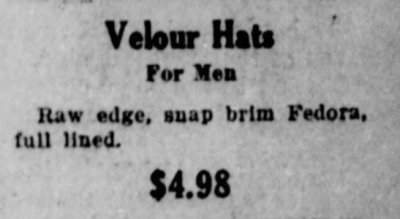 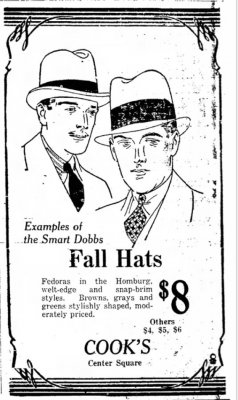 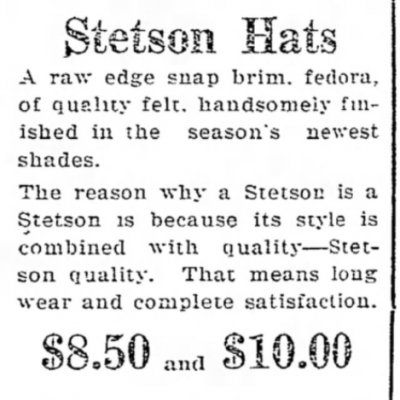 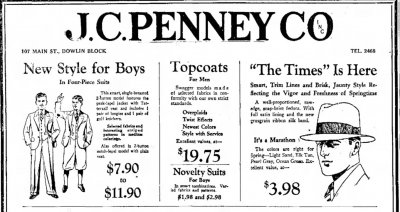 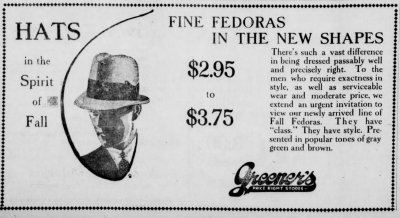 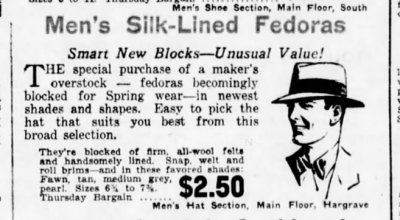 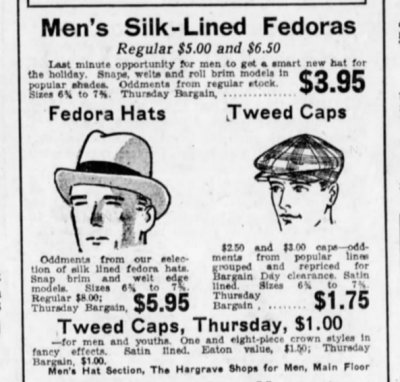 What is consistent throughout the 1920s and into the 1930s in perusing hundreds of advertisements is that the snap-brim hat was worn by younger men and marketed to them as a casual style, while the rolled brim was marketed as the conservative style. This is how the fedora comes to be known as simply a soft felt hat regardless of brim. The fedora shape of the crown was made with a variety of brims. The rolled brims were popular from its introduction in 1882, and consistent sellers until a decade or so into the twentieth century. In researching through the advertisements and newspaper articles, 1924 seems to be the breakout year for snap brims, even though they enjoyed a bit of popularity for over a decade. The late-1920s seem to be the transition period, where hats with fedora crowns and snap brims are replacing fedora crowns and rolled brims in the mainstream of fashion. The soft felt hat is changing into what we know today as a fedora.

Thanks for this great information! The center crease is also associated with Alpine hats so that is another factor. Still I feel (no way to prove) most early Fedora had curled brims (basing this on popular Euro / German hat styles like the Homburg). Also retail advertisements are not always accurate. For example this advertisement that appeared in the Miami News 12/10/1920. 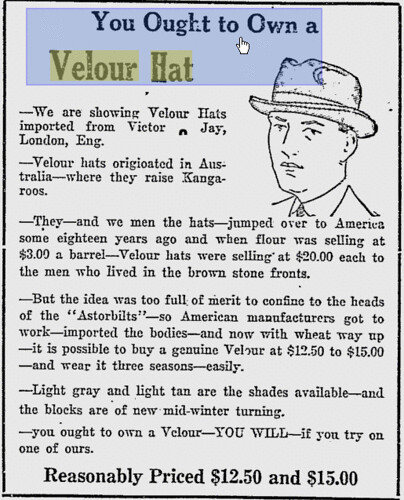 mayserwegener said:
Thanks for this great information! The center crease is also associated with Alpine hats so that is another factor. Still I feel (no way to prove) most early Fedora had curled brims (basing this on popular Euro / German hat styles like the Homburg). Also retail advertisements are not always accurate.
Click to expand...

I'm not disputing that claim at all, because that was the fashion of the early period, from 1882 to the 1920s. But with the increasing popularity of the snap brim by the 1920s, the change was irreversible, and the fedora with snap brim was becoming far more common than the fedora with a curled brim.

As for the accuracy of advertisements, yes, they're a step or two removed from the manufacturers and any accuracy from there, but the preponderance of evidence suggests that the snap brim fedora was becoming well established by the late-1920s.

Here is an early 1900s (pre WWI) catalog from J. Heinr. ITA Wien. I would guess the styles are very close to what you see in America at the same time period. Almost all the soft felts are setup with center creases and side dents. Some look like they could be snapped but are shown brim up (probably common).

For what its worth.

From almost the beginning, the term fedora seems to have been applied to hats of any material (linen, panama, leghorn, felt, etc.) and of numerous brim shapes, treatments, and sizes. The only consistent theme I see is the center crease. The term fedora doesn't seem to be used all that differently now than it was used in its infancy. Only we include a wider range of crown shapes than they did.

(1922) Dobbs are also doing well with an all linen hat made in the fedora shape This hat is natural linen color and has a patented attachment in the inside of the crown which keeps the crease in shape This is called the Stay Put and is merely a bit of tape sewn to each side of the crown on the inside At the end of each tape is a snap which when fastened with the tape on the opposite side of the crown holds the hat in a natural crease Linen caps are also proving to be popular although the hat is the best seller.

(1902) In 1897 however an ingenious dealer in Guayaquil the shipping point of Ecuador had a few dozen hats braided and blocked in what is termed the Fedora or Alpine or tourist shape These he sent to London and one of them he presented to the Prince of Wales.

(1919) The Fair held one of the most noteworthy sales of the season This big store had good grade rough straws and light weight Leghorns in fedora shape for $2.00. (1900) All the retailers have done a rushing business and stocks will be well cleaned up before the season is over Outing hats and caps have also been in good demand the low crown wide brim raw edge pearl Fedora selling best.

(1917) John E Apel manager of the St Louis store of The Brooks Company is featuring this year a new hat called the Billy Lee It is a combination of sennit and split straw It is of light weight yet strong and sticks to the head Another hat which Mr Apel says will be popular this summer is a fedora shaped straw with a 3 inch brim.

(1916) In soft hats the Fedora shape with creased crown appears to be the only thing offered for which there is a real demand. The crowns are lower and the brims wider than a year ago The plain black band is away in the lead Some houses report a moderate sate of scarf bands They will probably sell more freely after the straw hat season opens up which will not be until about the middle of May The formal day last year was May 13 although several rather premature houses began featuring straw hats as early as the last week in April.

(1916) Shapes liked most in the soft braids are fedora, diamond, and sunken crowns Felts have kept up wonderfully for this time of year.

(1916) We find the tendency in soft hats for spring to be toward the flat set brim and fedora shape says Mr Jerauld.
K

Gentlemen, these ads and news stories are great and really document the history of how the public experienced these hats.

In Brad's post, the Cooks and Greeners store ads show the very high, wide crown with narrow brim look that many associated with 20s gangsters, like the short criminal in the Bugs Bunny cartoon "Thugs with Dirty Mugs."

I hope this doesn't offend any he-men out there, but originally, the fedora was a hat worn on the stage by a woman named Fedora, hence the name. I think it looked pretty much like today's fedora, some sort of crease on top with dents in front and a medium brim. On the other hand, the Trilby, named after Svengali's protégée, is very similar but has a pretty stingy brim and is sharply turned up in back. In old movies, people like Sean Connery are likely to wear Trilbys. People like Spade and Marlowe liked fedoras. Women seldom wear any sort of hats these days, but at one time, fedoras and trilbys were popular with women while most men wore bowlers, or hombergs or good old newsboy caps, etc. In South America, fedoras are still popular with women, I think. I wonder if they take them off when they sit down to a sauteed guinea pig dinner....

You should take a look at the Fedoras in the 19th Century thread (it'a currently few threads down). The "Fedora" origin you mentioned has been debunked.
Last edited: Jul 1, 2015

Steve, Brad, facade, everybody that performs this research and posts this information - Thank You

This newer hobby of mine has so many facets, and you fellas make learning about this stuff very enjoyable. This history is as fun as the hats, IMHO. The knowledge you guys have and share - thank you again. This is a great discussion, as are most of these hat history threads.

Well, I certainly understand the question and I would tell you if you're shooting for the high crown/Cagney in The Public Enemy look I would start at 2 3/8 and see if it works with your face and head shape etc. Then if you still want to go smaller, go in small increments,but I wouldn't advise you go less than 2 1/4. If you want to see a lot of high crown hats check out "The Conversion Corral" thread. Many of us there love the high crown style( 6"+). Good luck and be careful.

It would seem to me that there are two different questions being thrown around in this thread and one would have to know which question is being asked to answer it.

As so many have noted, the typical 30s hat is a shorter, often rolled-edge brim with a taller crown. But, as others have noted that sort of hat doesn't look good on just everyone.

mayserwegener said:
In my opinion there is no such thing. Also Fedora (term only used in American at that time) hats from this time period had curled brims (similar to a Homburg). They were very popular in the early 1930s and earlier and looked something like this. 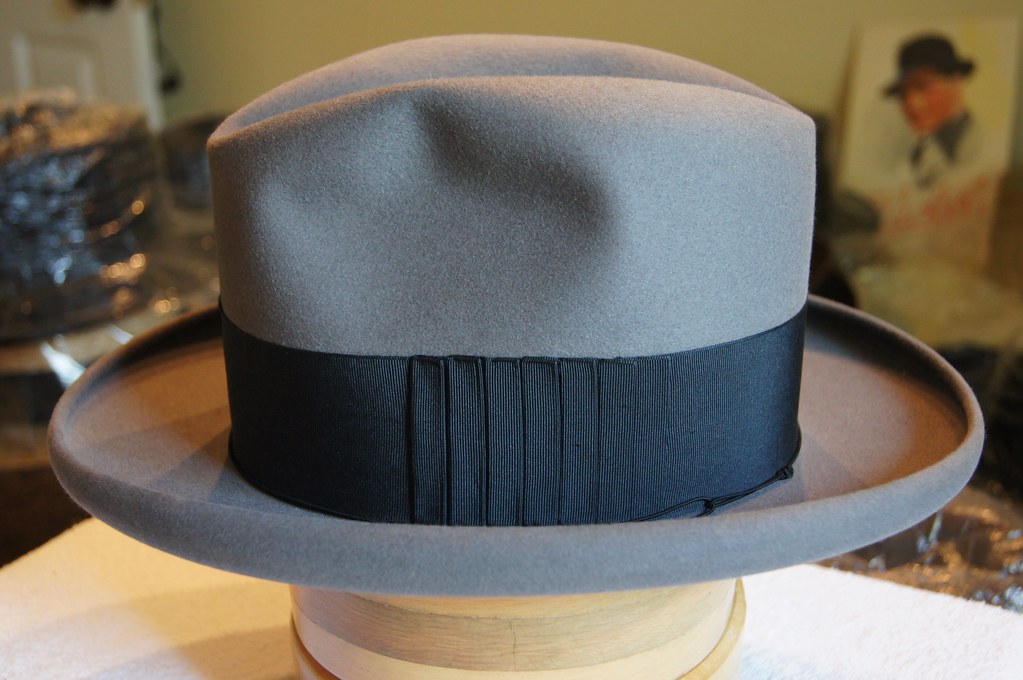 Most people in this time period wore their hats brim up even if the brim could be snapped.
Click to expand...

Good day What size is the ribbon for the homburg? Thanks
Last edited: Mar 9, 2022

Styleslover said:
Good day What is is the ribbon for the homburg? Thanks
Click to expand...

I’m not sure I understand what you are actually asking. Are you asking the color or type of ribbon was used? Are you asking about the “bow?” And are you referring to the hat on top with a curled brim edge that doesn’t look to be an actual homburg? If you could be more precise with your question you increase the odds of getting the right answer. Lots of folks here willing to help.

deadlyhandsome said:
I’m not sure I understand what you are actually asking. Are you asking the color or type of ribbon was used? Are you asking about the “bow?” And are you referring to the hat on top with a curled brim edge that doesn’t look to be an actual homburg? If you could be more precise with your question you increase the odds of getting the right answer. Lots of folks here willing to
Click to expand...

I forgot to put what size is the ribbon. I wrote this late at night. Thanks for bringing this to my attention!

Styleslover said:
Good day What size is the ribbon for the homburg? Thanks
Click to expand...

The ribbon / band width is 5.5 cm. As mentioned this Hat wouldn't be considered a Homburg.

mayserwegener said:
The ribbon / band width is 5.5 cm. As mentioned this Hat wouldn't be considered a Homburg.
Click to expand...

Thanks! I just realize this isn't homburg when I saw the brim curled.

Styleslover said:
Thanks! I just realize this isn't homburg when I saw the brim curled.
Click to expand...

The Curled Brim is a Hidden Stitch Over Welt. Such Hats were common in Germany (also other parts of Central Europe) in this time period. Here is a R & M Wegener from the same time period. 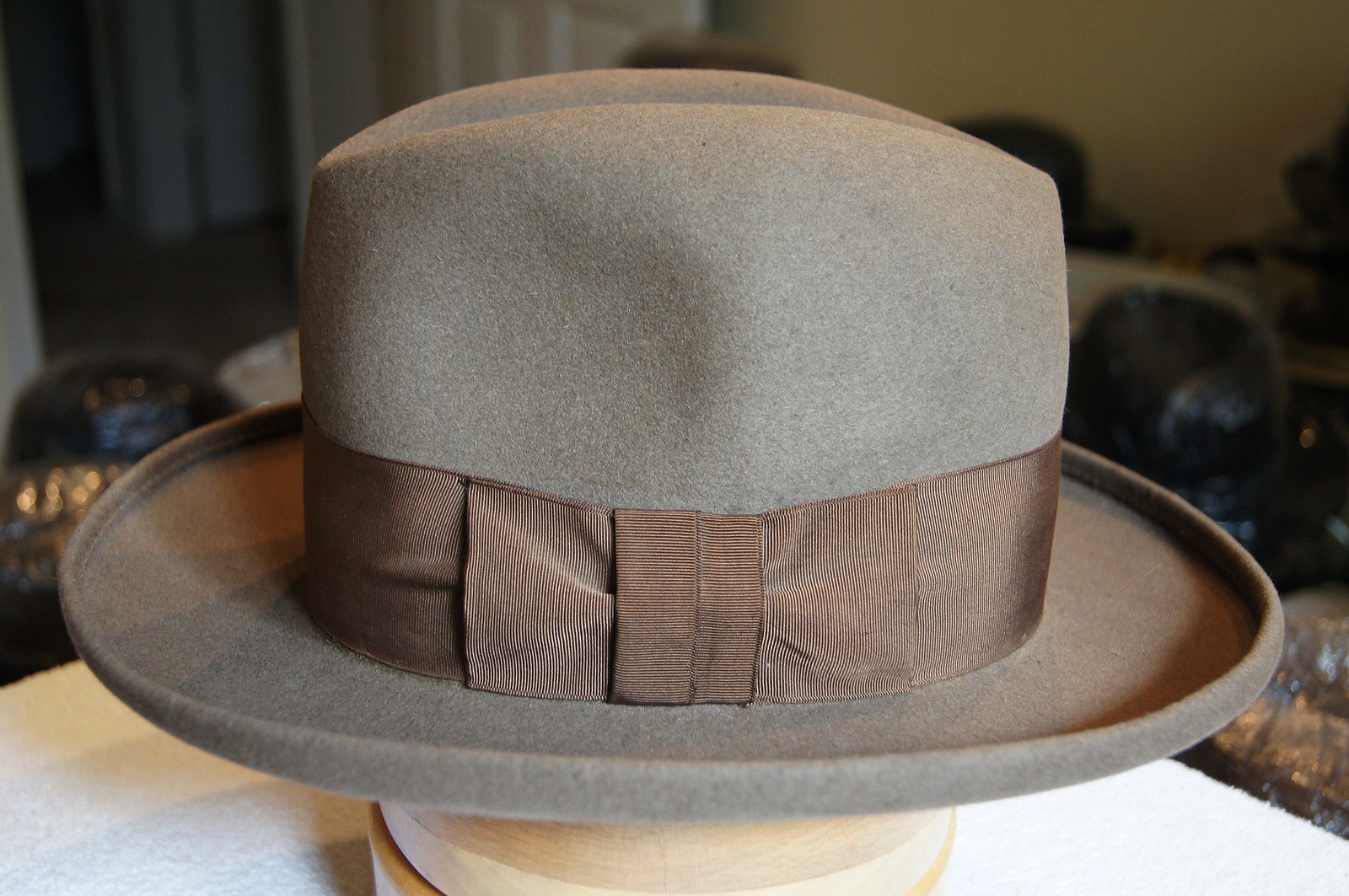