As the 75th anniversary of one of the greatest battles in history approaches, memorials are popping up.

The Royal Canadian Mint is issuing several coins, one limited edition showing an iconic (to us) image of a soldier looking back while a mate pats him on the back.

The identity of the soldier inspiring the image has now been determined:

And check out the two minute film clip of Canadians landing at Juno. Likely well after H-Hour, but it still amazes me what these guys did. 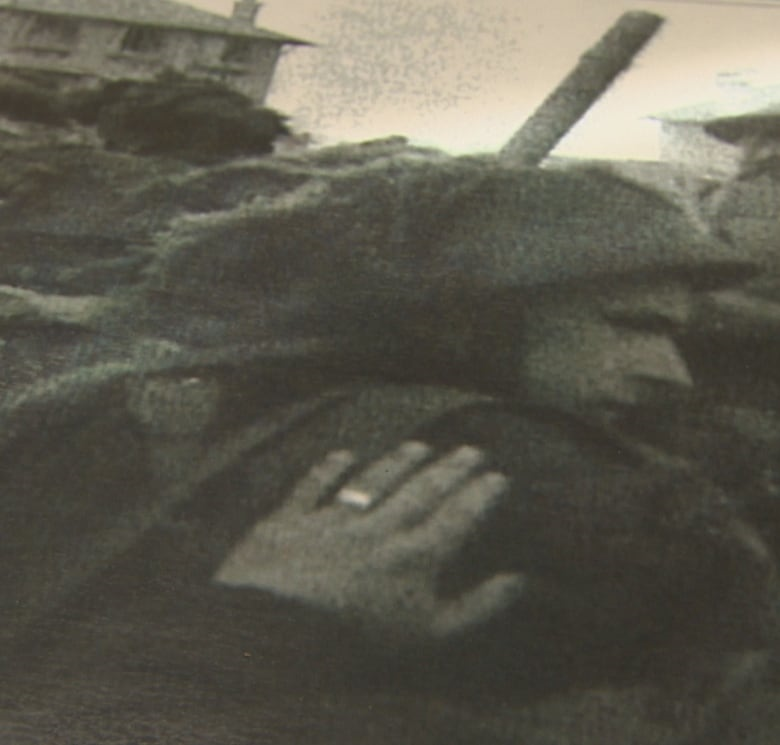 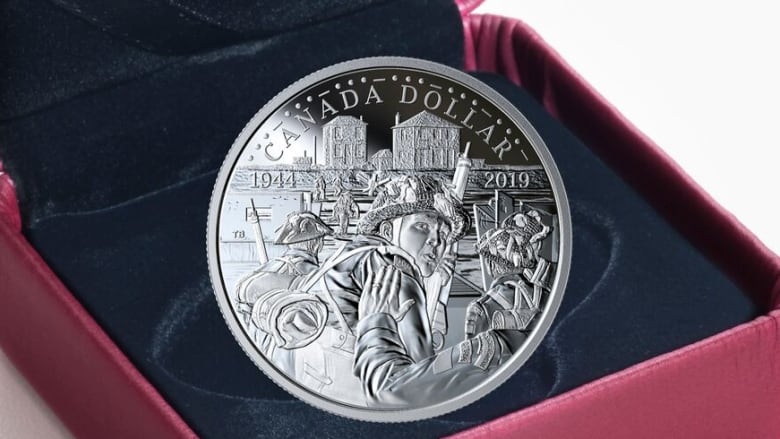 Hope they do better than the British post office who produced a series of D-Day stamps, one of which had an image of US troops landing on Dutch New Guinea in the Pacific! That stamp, needless to say, will not be issued after having it pointed out to them after the first draft was published. 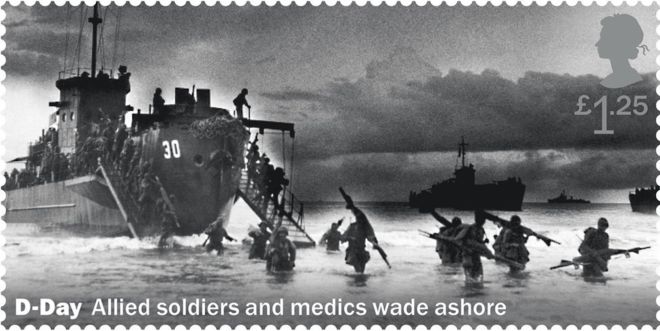 Location
Well behind the front lines!

I was at Normandy in May last year and they were gearing up for the 75th even then.

Would love to go and participate in activities, but I'm sure it will be CRAZY crowded. I think I'll wait to go when things are quieter.

It would be great to head over, but our year is too full. We hope to get to the UK in 2020 (boy, that sounds weird) and perhaps we can get to Normandy for a visit.

Was at Omaha beach in November. They are already preparing for next June. As I tell anyone who will listen: “if you are an American living in Europe, you are obligated to visit the D-day beaches at least once to pay homage. If it wasn’t for their sacrifice, you wouldn’t be living your (very) privileged life today.” It was moving, and I’m glad I went.

Location
Well behind the front lines!

AmateisGal said:
Would love to go and participate in activities, but I'm sure it will be CRAZY crowded. I think I'll wait to go when things are quieter.
Click to expand...

Agreed. When I was there last May, our tour guide talked about insane each June 6 is. Coming off Utah beach, he pointed to the massive fields on each side of the road inland, saying these fields were completely filled with re-enactors and the public, for a very long stretch back form the beaches.

At Omaha, there are a lot of houses along the waterfront so people have to be packed into those fields just past the first inland berm.

Being in a mass of humanity that big would drive me nuts.

Nope, I'd rather go on another day as I did, and get to experience some things without a billion poep0le squeezing me out. Walking down to the low tide at Omaha Beach, turning around and slowly walking back to the breakwater was an almost religious experience for me. 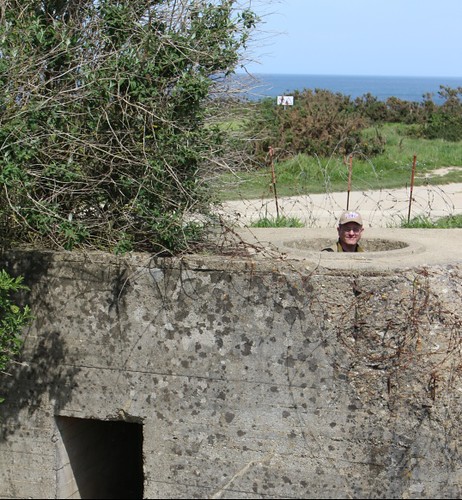 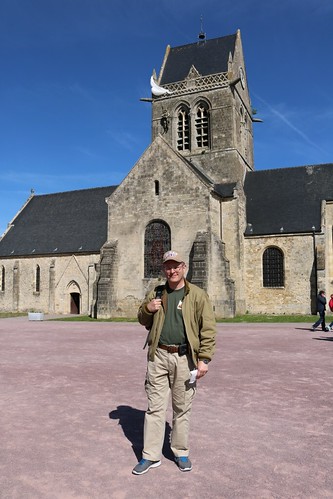 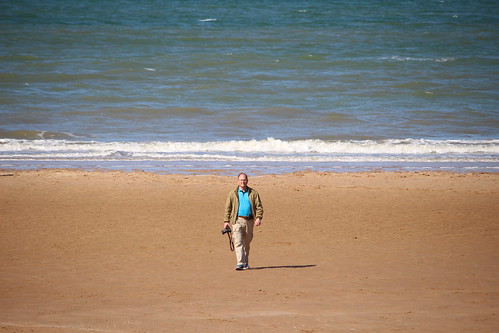 Any Loungers planning on attending? If so, I'd love to meet up with you - I'll be in London on a business trip the week before the anniversary and will be visiting Normandy for the first time.

Enjoy your visit. It is well worth it. I hope you are able to find a quiet spot to soak it up and contemplate the meaning of it all.

Finally: Saw this article on "The Liberty Jump Team" that will be reenacting the famous airborne invasion jump on the anniversary.
https://www.hawaiinewsnow.com/2019/...ll-parachute-into-normandy-commemorate-d-day/

The anniversary is surprisingly quiet up here. Mind, I do not watch much 'regular' tv, so perhaps I'm missing the hoopla on the news, but it all seems underwhelming.

I'll be remembering with the family in our own way.

Do you have any plans to commemorate the d-day anniversary, the day after tomorrow?

Somewhat out of character, my wife suggested that we plan to rewatch the d-day episode of Band of Brothers. Not a bad idea. Failing that, I might just enjoy a cigar and a little Jack Daniels in the backyard as I contemplate the epic events and the personal courage of that long ago day.
E

I'm listening to news reports about world leaders gathering to commemorate D-Day. Today is June 5th!!?? Were they all too busy tomorrow?

There's a big crowd of my re-enactor friends there for the 75th anniversary. I am getting constant text updates, it's almost like being there. Here's a few of the photos they have sent and one amusing quip. One of the photos depicts military Land Rovers, I text back: "Land Rovers?" For anyone not in the know, Land Rover production didn't start until three years after the end of WW2. My friend text back: "There weren't any stitch counters back then, all too busy dodging bullets." Quite! 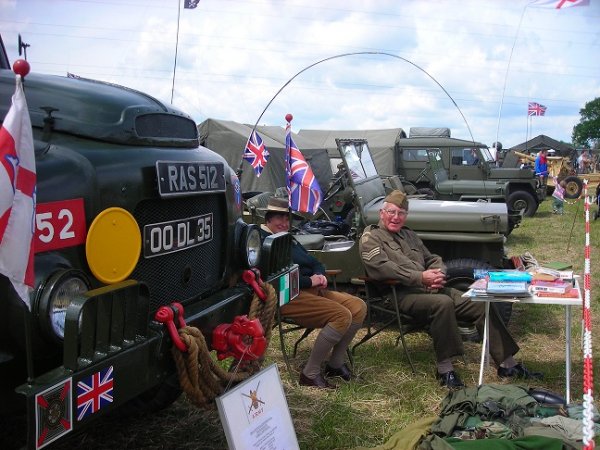 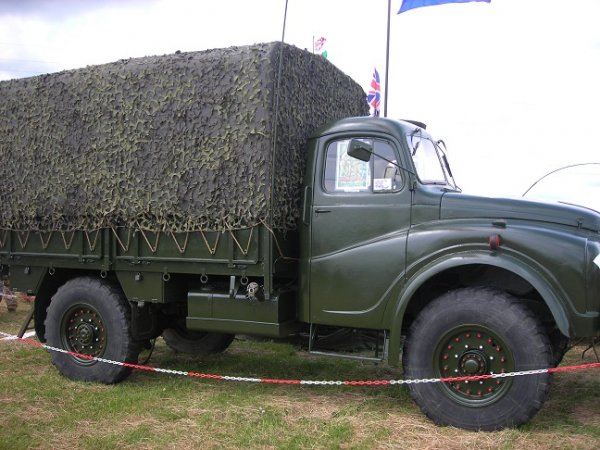 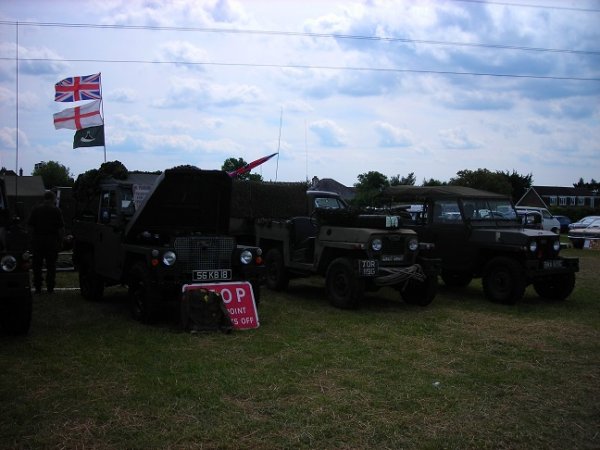 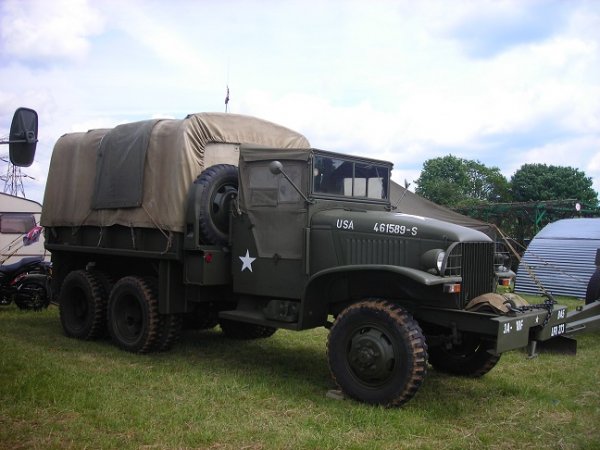 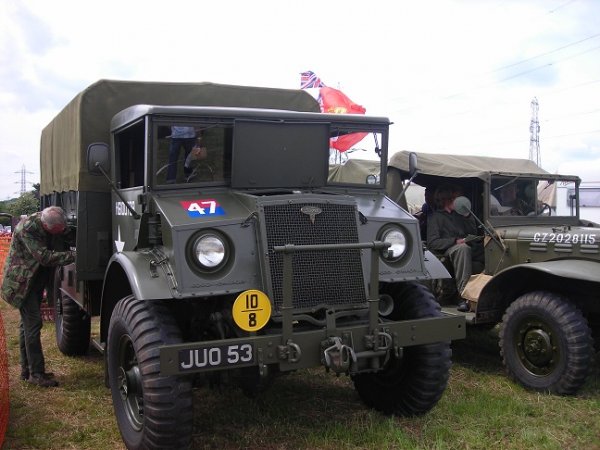 Amazing how dependent Normandy was on the bicycle!

The Canadian soldier kneeling bears a striking resemblance to my D-Day dodger father! 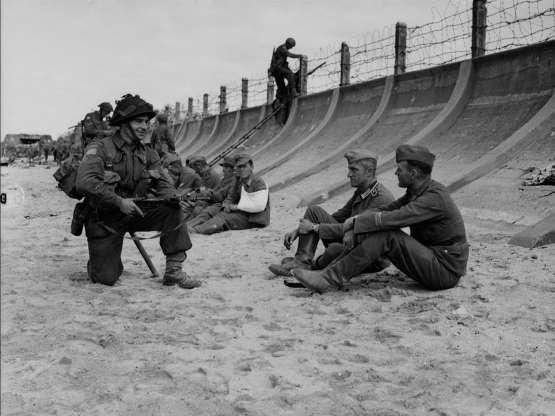 Normandie update: Different quality photos because the texts are flying in from all and sundry. Most want to know why we are not there.
Apparently the security for President Trump has caused road closures and hours of traffic chaos. My friends are all bedding down under canvas and I'm being told that it's raining, again. However there has been some good hours of sunshine which they have made the best of. 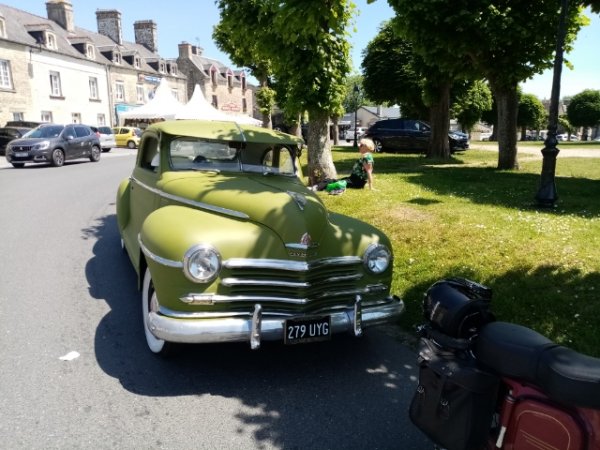 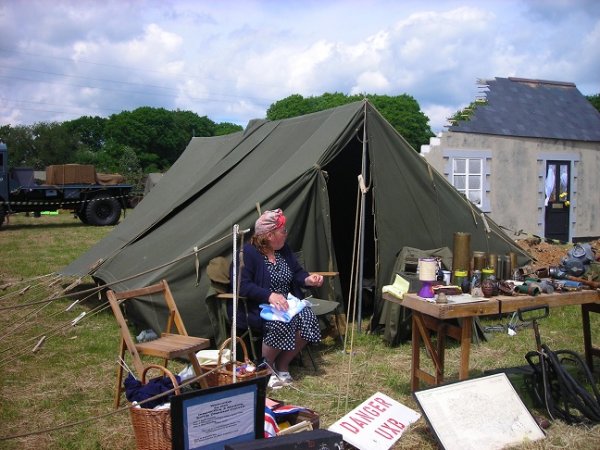 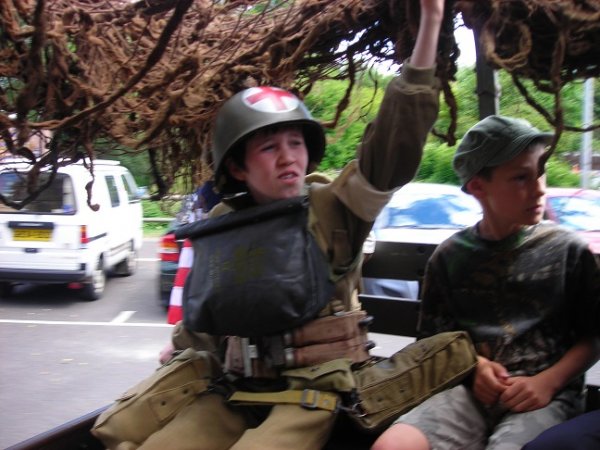 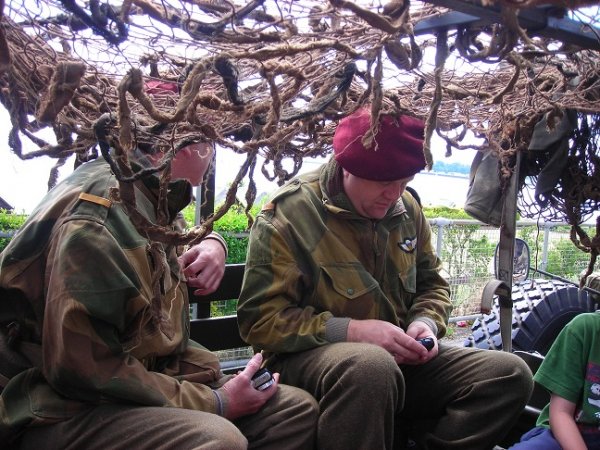 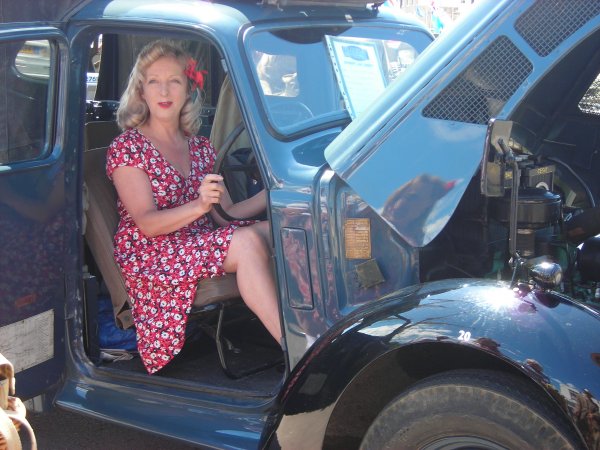 This obituary is a few years old.

It’s the Obit of Bill Millin, the bagpiper who majestically piped his way across Pegasus bridge while under fire.
Balls; they grew ‘em bigger back then.

William Millin, Piper Bill, is best remembered for playing the pipes whilst under fire during the D-Day landing in Normandy. Pipers had traditionally been used in battle by Scottish and Irish soldiers. However, the use of bagpipes was restricted to rear areas by the time of the Second World War by the British Army. Lovat, Bill's CO, nevertheless ignored these orders and ordered Millin, then aged 21, to play. When Piper Millin demurred, citing the regulations, he recalled later, Lovat replied: "Ah, but that’s the English War Office. You and I are both Scottish, and that doesn’t apply." He played "Highland Laddie" "The Road to the Isles" and "All The Blue Bonnets Are Over The Border" as his comrades fell around him on Sword. Millin states that he later talked to captured German snipers who claimed they did not shoot at him because they thought he had gone mad. Some balls indeed. Who knew that Bill was born in Canada?

For anyone with SiriusXM, they have an hour of NBC radio D-day news broadcasts today on the home page if you go online.

Lots of good stuff available online. Here is a link to Canadian news broadcasts from the great day. I know there are American and British contemporary archival recordings as well.

I hope to get the family out to Normandy. I have visited Dieppe, site of the Canadian landing in 1942, but have yet to get to Juno, our beach, or any of the other four.