So I noticed a dark streak on the back my Aero Bronco A2 jacket the other day. It wasn't too noticeable so I left it cause i wasn't sure what caused it or what it was. It was about a half inch wide and 2 or 3 inches long. It was bugging me so zi got a cloth and rubbed it a bit and thought it was coming off but instead I just spread it more. I tried dishsoap and water but that didn't help. It must be grease and now I have a fckn dark blotch on the back of my new jacket. Wtf can I do about it? Can I get it off? I am pissed! 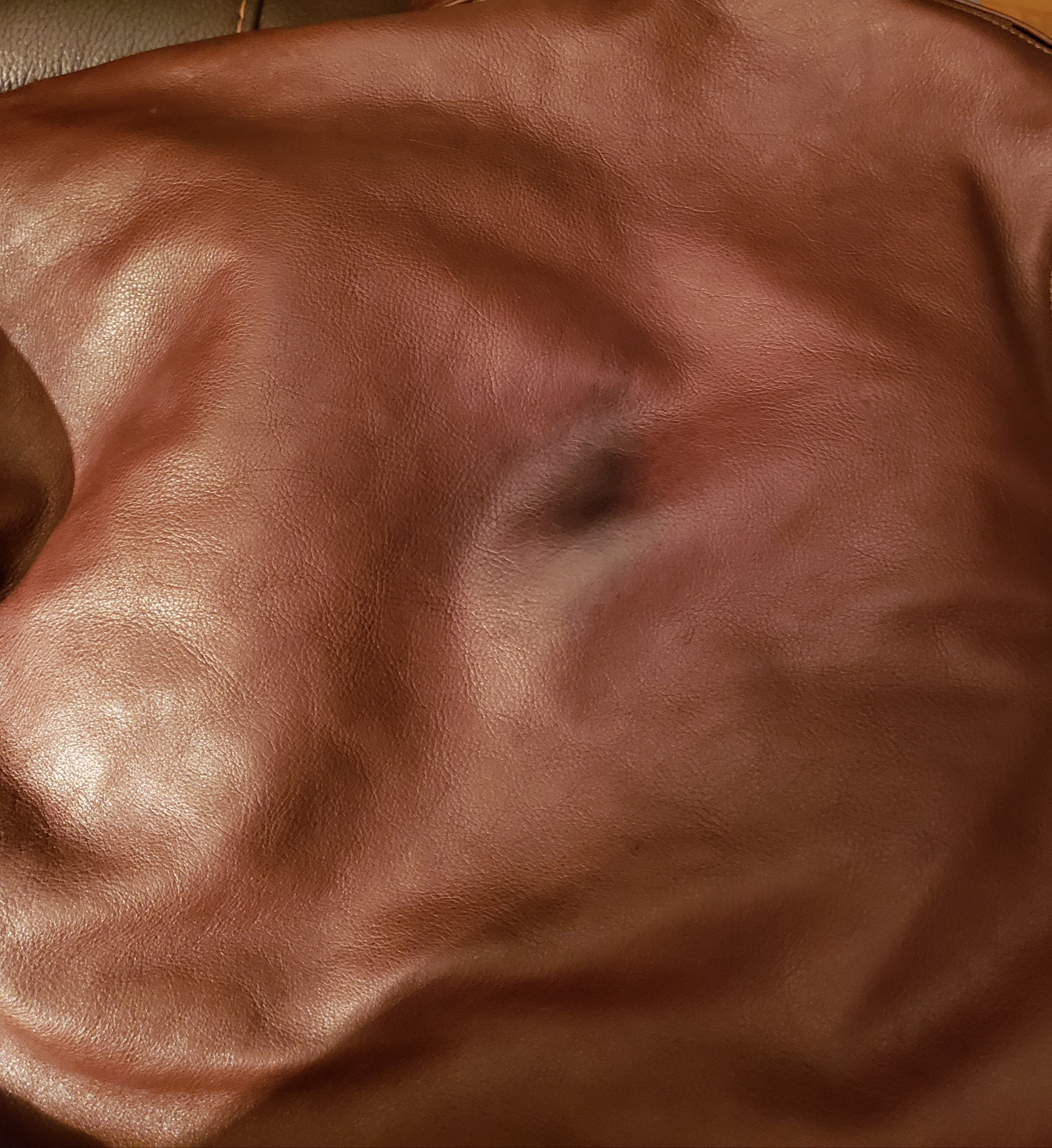 Saddle soap or Lexol cleaner is a safe choice. Try it and let dry at room temperature and see if it lightens the stain before thinking of adding any conditioner which could darken it further

Grease stains are tricky. You were on the right track with Dawn dishsoap, just no water and don't press into it. Lay the dishsoap cloth/blotting paper on the stain and let it do the lifting. Give it a bit time, gently wipe away. Repeat. It takes a few times, could stretch out to a day or two. Gentle blotting and not hard scrubbing. The jacket looks like Vicenza, they have a topcoat so there is some protection, the grease isn't gonna soak into the leather right away. Just don't press the stain in. Gentle blot. Good luck.

Yes its Vicenza in seal brown. I think I messed it up worse. I scrubbed it with saddle soap. Do you think dyeing the leather dark brown is an option?
Thx.

I'd give the Dawn dish soap soak and lift a few tries before going down the re-dye route. Baking soda paste could also work but they tend to dry things a bit in the process. I've used Dawn to lift heavy grease off my BBQ. The trick is to let it sit a bit first. Go slow. Stretch the blotting process out to a full day. I am quite certain it's fixable without re-dying.

I coated it with dish soap and will let it sit overnight.

Let the dish soap do the work. Try to work slowly and take your time. Canuc is correct. There is hope. Good luck with it. I have their first prototype in SH.
D

Dish soap has been my trick for years with oil stains on shirts, good to know it’s safe for leather.

even if it didn’t come completely out, in time it might fade or the leather darken to a similar shade. Some leather creams will darken the leather they say because of the oils and eventually lighten up when absorbed.

The Vicenza Horsehide has a relatively thick top coat. Aero says thin semi aniline but mine feels more like a clear lacquer type. I know this because I failed at dyeing my olive Vicenza the first time. Without any stripper and the dye just didn't penetrate. This could be a good thing in your case as the top coat could still be holding and keeping the grease from penetrate deeper into the leather. The smudge look in your photo just look like grease smudge to me at this point, so there is lots of hope. Horsehide leather are quite tough, they can endure a lot.

I could strip the leather with acetone and redye the leather I think. Or,
I could send the jacket back to Aero and have them replace the back panel which of course may cost quite a bit. I think I will email them and see what they say.

This is here to stay. Just wear it as is, you'll get the jacket dirty anyway with time.

+1 to what Monitor said.
IMO you will never be able to remove it 100%.
There is also no way to guarantee a redye would work, as the dye might not soak in the greasy bit the same way it soaks in the non greasy bit.

Your only real option is as you say to change the pannel, but Murphy's law tells us you will stain another part of the jacket the day you get it back from Aero.

Personally i would leave it like that, things that get used age and show wear, so is life.

Recently my cat did her claws on one of my jackets, she had never done that before in 8 years.
LIke you i thought about changing the panel, i was pissed!
In the end i left it like that, changing it was super expensive (800$) and i didn't think it was worth it.
I barely think about it now. 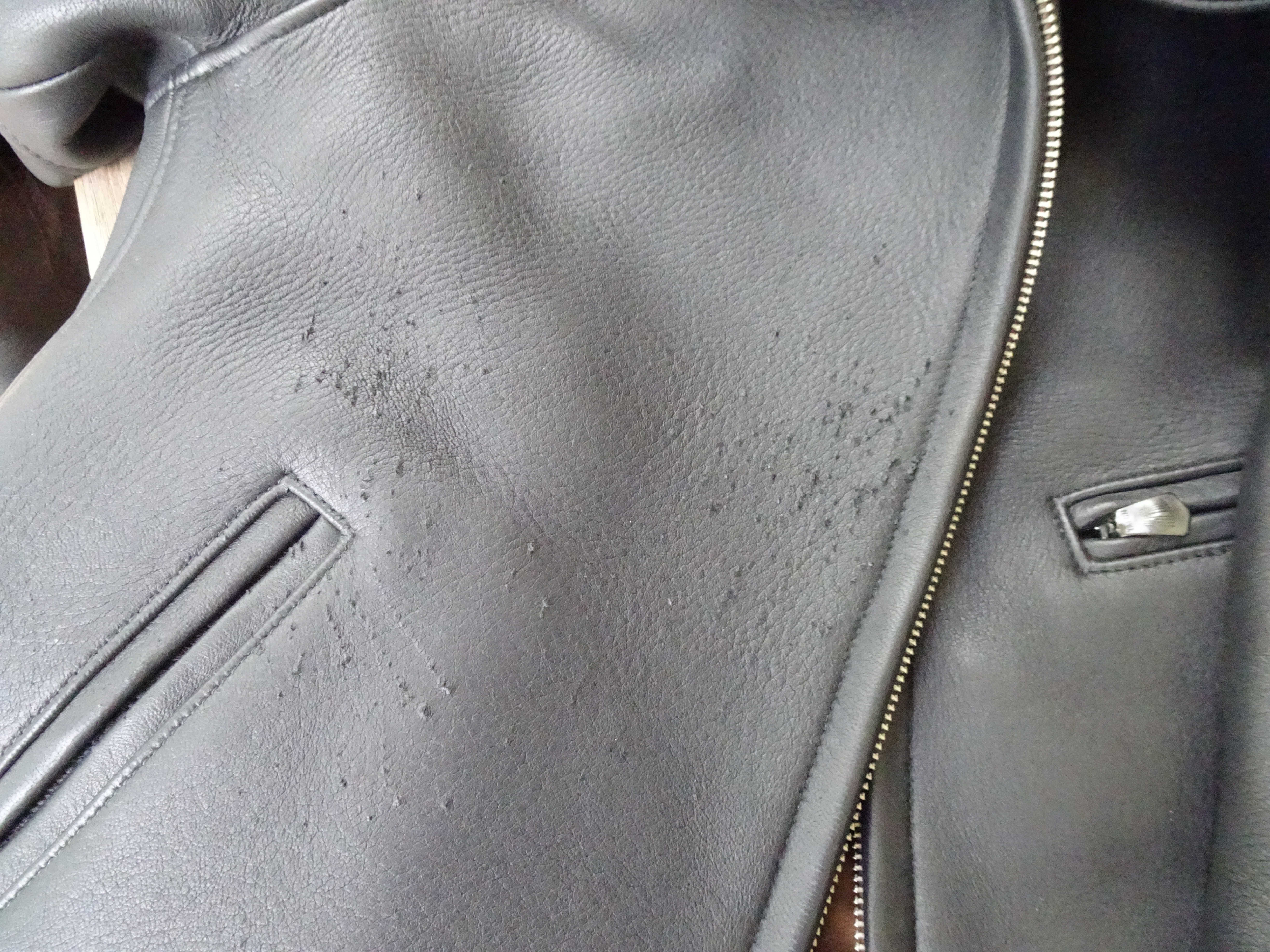 Here it is after a bit of smoothing out, not that bad... 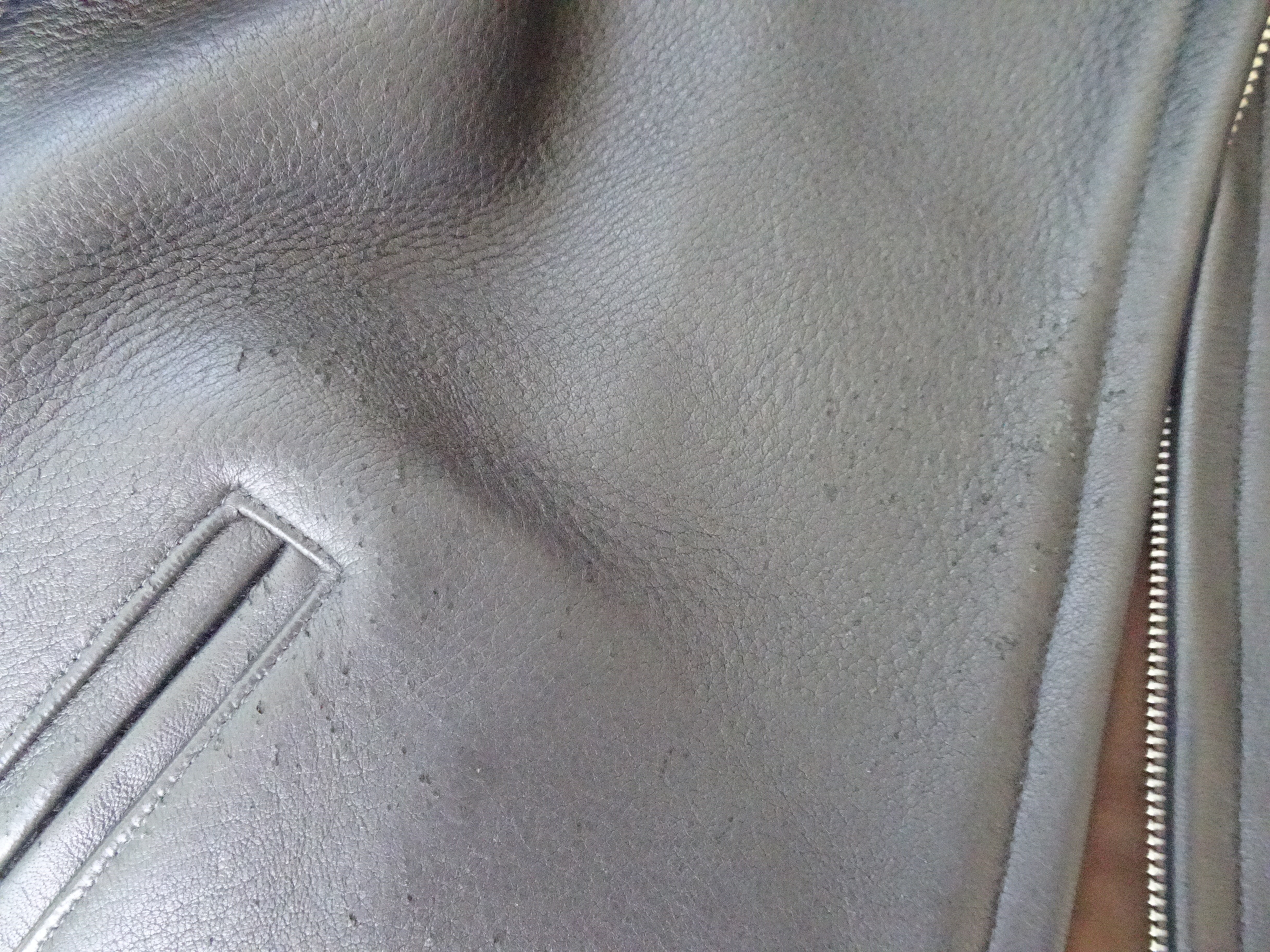 Whatever you do, be gentle, leather is tough but still pretty sensitive, don't be that guy: 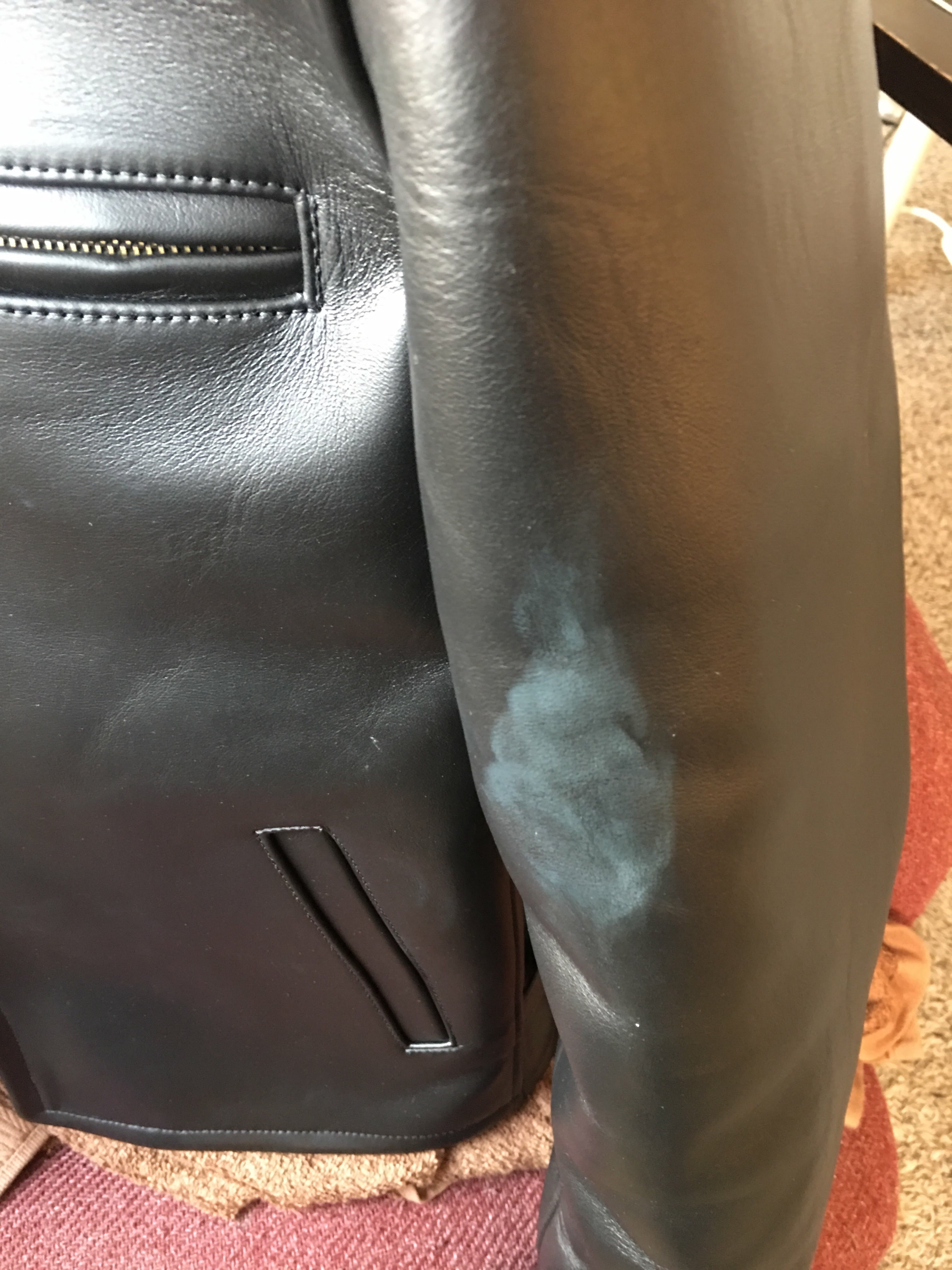 yeah…I really don’t want to get into dyeing cause it’s a real hassle. Another option would be to do a painting on the back.

This picture of my grandson painted on the back maybe. 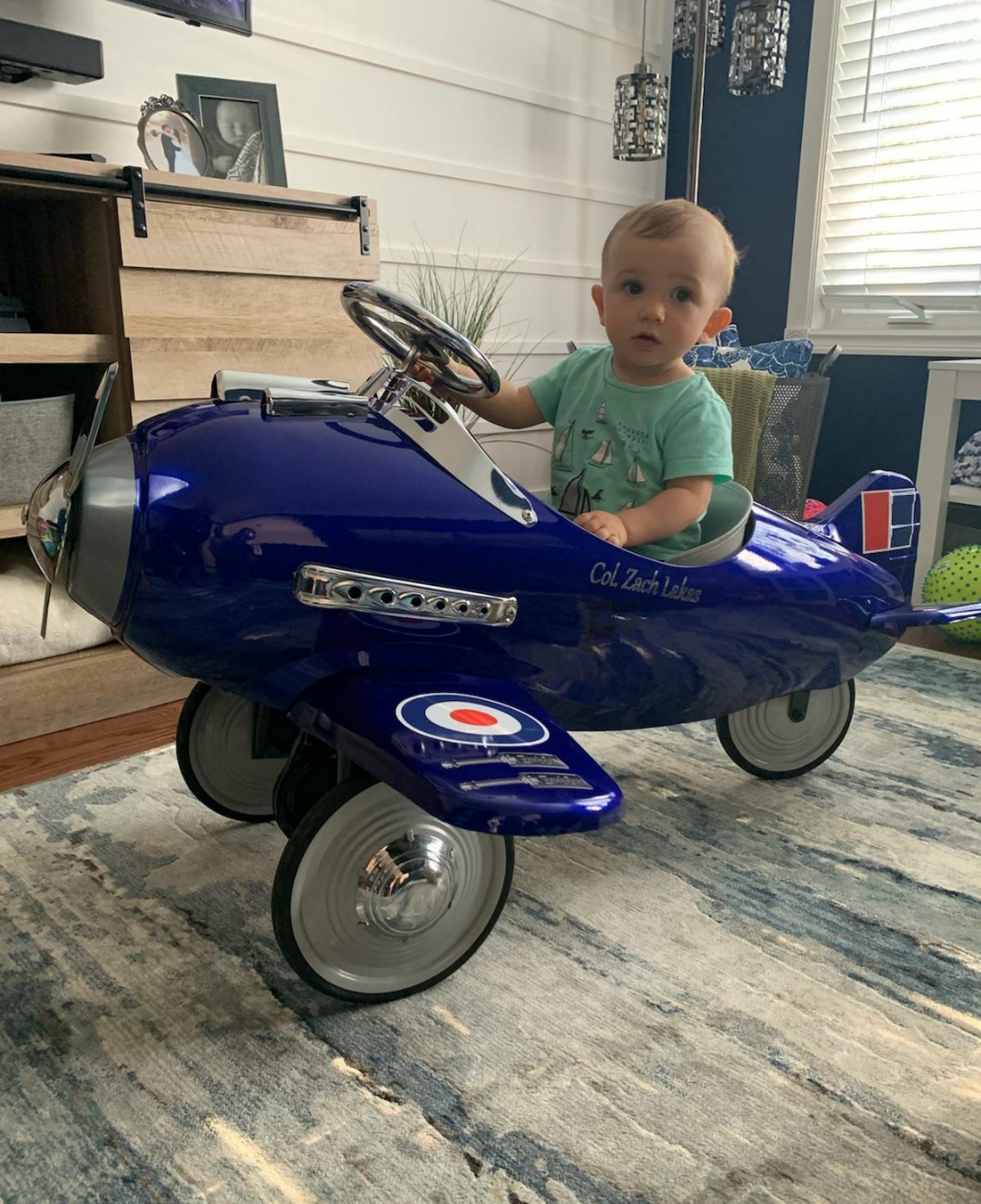 Give it time to dry after doing the dish soap thing. Maybe a week or 2. As mentioned, even conditioners that darken the leather some tend to lighten up in 6 months or so. Obenaufs will darken the whole jacket more permanently.

Yes. The dish soap didn’t seem to work But who knows. It’s going in the closet for now. I have other jackets to wear. Not going to stress about it anymore.
W

Are you close to Toronto? Might be worthwhile to take the jacket to a leather dry cleaner shop and discuss. The solvents they use might be able to lift the stain.

Will Zach said:
Are you close to Toronto? Might be worthwhile to take the jacket to a leather dry cleaner shop and discuss. The solvents they use might be able to lift the stain.
Click to expand...

If this was my jacket, and my OCD would bother me too much, I would consider dry cleaning by a leather specialist shop. The solvent might remove most of the stain. If the result was not to my satisfaction, I would then hit the whole jacket with Obenaufs, which darkens it a shade or two, long term. I would not dye it, too much work and too risky that it come out blotchy.

The only way to successfuly dye the jacket is to go full atomic. Stripped down to the bone with acetone. You'd literally need to dissolve the oil in acetone and bring the rest of the jacket to the same state. It's not fun. It can be done but I don't think it's even remotely worth it. A simple and quick fix (besides what has already been mentioned) is URAD dark brown. It sits on top of the leather and you can feather it into the stain. It will darken the seal? vic to a dark seal.
You must log in or register to reply here.