How to Imitate a Saddleback Leather bag...

Dav said:
I have one of their wallets, love it, not too heavy at all and is actually lasting, unlike others I've had that don't last a year.
Click to expand...

I’ve got their wallet as well and a I think its a keeper. It’s already outlast the previous two wallets I owned and if I’m not mistaken it comes with a lifetime guarantee

I've wanted one of these for some time - unfortunately, I hesitated back when the pound was strong and so missed my chance. I've looked at a lot of similar bags since, but been unconvinced that they would hold up. I don't mind the extra weight (especially when it can be worn as a back pack, which would be my intent); the stuff that goes unused with me is the stuff that I can't stand the look of. If the pound ever recovers, I'd look into this - also loved the suitcase they did. I do have a couple of their small ID wallets. Switched one from being my everyday wallet because I wanted something with a money-clip, but I still use one for my travelcard, driving licence, and work ID. Had it several years, quality is impressive. They certainly aren't cheap, but comparing like for like they're not out of step with the market either.

The video is cute. It's a nice, fun way of presenting the differences between his product and the copies without it sounding bitter or ranty. I can only imagine how irritating it is to see people buying cheaper copies of your product and not getting that there's a difference.

^^ Second paragraph above was exactly the point of this whole thread.

I have worked in (destructive) product testing for nearly 10 years of my career, however unofficially and un-paid I have probably worked in that field my entire life. It's simply amazing how much people do not realize just how cheaply something can really be made - yet still charge a premium price for it and folks buy it.

That said, I completed some extensive wilderness experiences several years back and over 80% of the trips were made wearing Ex Officio polyester hiking pants. Point being, I needed lightweight, breathable, durable pants that would dry out quickly after being submerged in water, mud, etc. Even rock climbed in them and no damage to speak of. They were not cheap, but for such light item, had incredible durability for the intended function.

I own the front pocket briefcase and the deep pocket. Love them both. Love the look and sturdiness.
Col Littleton also makes great products. I own their shave kit. Top shelf.

I had one. It was a terrible bag. Hard to get in and out of, 10 lbs empty, and so much hardware that it looked like something from the Eulenspigel Society. (Google it). It was uncomfortable and unwieldy. I got rid of it. My go to bags are:

Filson (one in canvas, and one in leather)
Ghurka Examiner (horrendously expensive, but ages so well that vintage one are more expensive than new ones)
TravelTeq (I have the double which sadly isn’t made anymore, but they are beautifully made, thoughtfully designed and reasonably priced.)

Honorable mention to the Belroy Apex Backpack which I use in the summer months.
M

bought the Squared Leather Backpack in 2016. I have carried it all over the world. It is heavy, but fits so good that it feels as easy to carry as my Filson Rugged Twill Large Backpack. Even when it is packed full, it rides so well on my back that it is not tiring. I am not young, but fit and just under 6 ft. I did not like all of the chrome D RIngs attached, so I cut them off with a large bolt cutter. It looks much better and doesn't make any noise when I set it down. So I have now had it almost 7 years and I must say it has aged well. 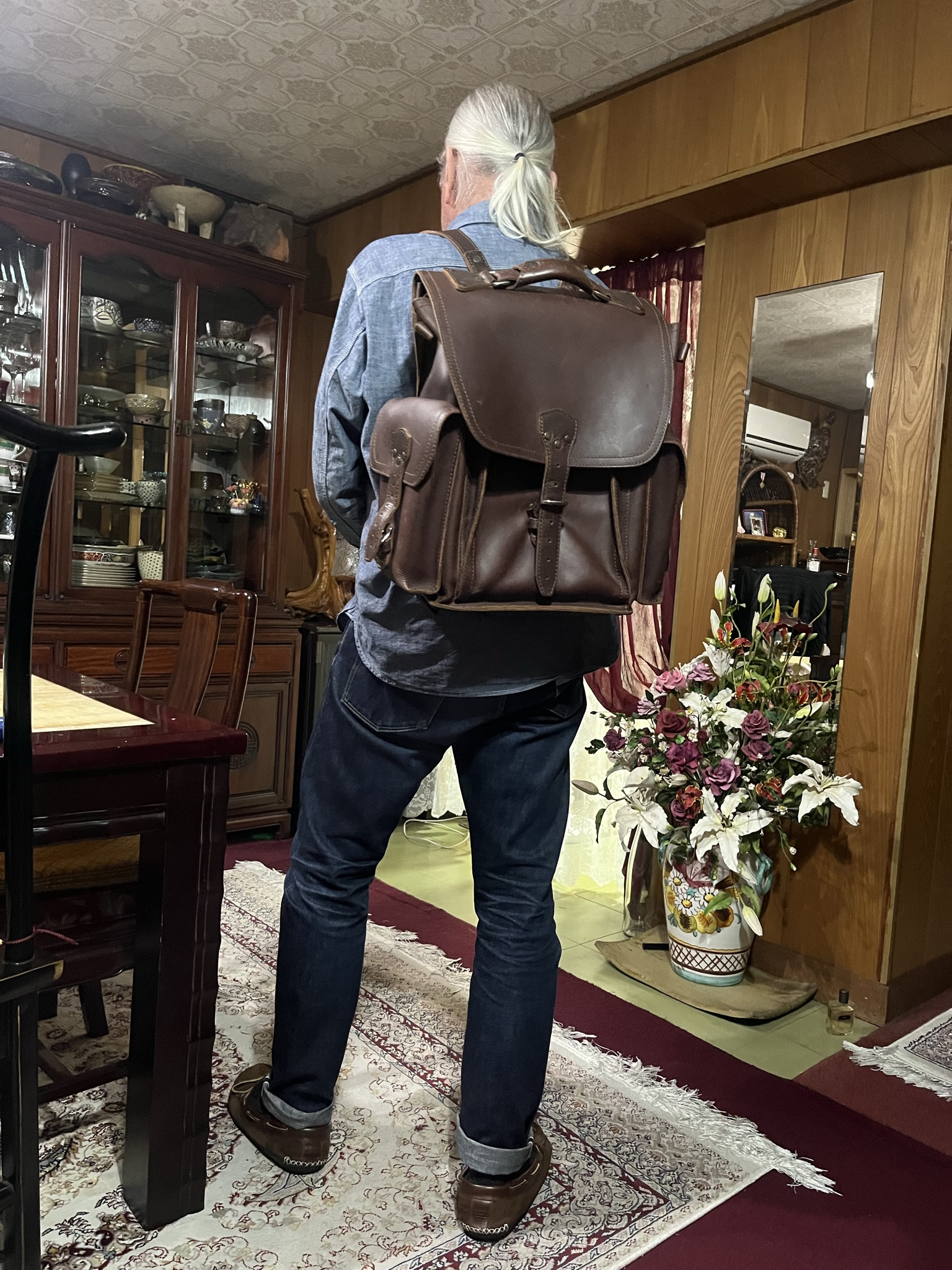 I like a good rucksack, 70's Jansport bags are my favorite, but canvas and leather milsurp is a great option, too.