Men's Cologne / Men Of ( STYLE ) THE FEDORA LOUNGE What Are You Wearing ?

One of my other passions related to fashion and style is fragrance. I have been wearing cologne since I turned 13 years old. Partly I was inspired by my father who wore the original Guerlain Vetiver for 40 years. Although I begged him to let me wear it to school he never let me. I had to settle for the original POLO GREEN instead. It was a fine fragrance indeed which still sells today , although it is not the same magical formula.

These days political correctness IFRA rules and overt dissatisfaction for any loud smells has altered the fragrance industry for the worse. The great "smellers" of the 70's and 80's have been bastardized into sugar coated fruit drops barely emanating a whiff of macho'ness. The few good fragrances with quality reminiscent of the glory days are marked with exhorbiant prices.

I am aware of the fragrance communities online and have participated in such forums. However at times I have doubted the authenticity of the reviewers and the general purpose for having the forum in the first place. It is my impression ( after years of participating ) that many forum members are shills for the companies themselves. Many times I have purchased a fragrance after reading such stellar reviews to find that the actual truth...in the serum was quite different. Namely with performance issues such as longevity and sillage which characterize a good fragrance.

Men of The Fedora Lounge. You are stylish and mature. You bring class back to manhood. What are you wearing on your skin...under your hat your tailored suits your glamour shades and your beards ?

I currently have two signature scents.

Chanel CoCo Eau De Parfum $120 3.4oz/ Coupled with the matching scented skin moisturizer $52. I buy the fragrance from Mexico since Chanel uses different alcohol for their USA production plants causing the scent to be less rich with less longevity on the skin.

By the way Original CoCo Edp is marketed towards women ! When Coco Chanel came out with this scent it was during the 1920's when women were beginning to act butch and smoke tobacco. Her older fragrances tend to glorify this era. NOT ONE female has EVER hinted that this was a women's perfume. I only get compliments on it.

The other fragrance I use is by an arabian company called Rasasi. The fragrance is La Yukawam which is a clone of Tom Ford's Tuscan Leather which goes for roughly $300 per 100ml. They are almost identical with just minor differences that only a trained nose can identify. La Yukawam can be had for $79.

During the 80's I used Caron Pour un Homme and Giorgio Beverly Hills. They still exist today but the formula isn't the same. Although Caron has just released a new version of Pour Un Homme in a parfum version which unfortunately is only available in europe. Maybe one of our european members can clue us in on this new release ? 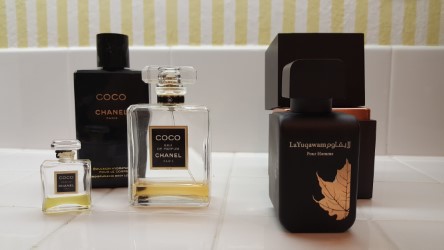 Roma will be my fave fragrance for the time being. I change now and then as I tend to get tired of the same smell after a while. Have been through; Fahrenheit, Brut, Aramis, Davidoff, even Old Spice and Tabac

Today I only wear a natural Amber Essence Oil

Well, over the years I've vacillated on this. For years POLO GREEN was my favorite, then it seemed everyone wore it. So I switched to Col Ichabod Conk's Amber and Bay Rum. Both great fragrances, and really not very well known.

But I've come back to Polo Green for the last couple of years, as I really enjoy it. So... there's my two cents.

I have a cologne for each season.

Tom Ford Tuscan Leather is my latest favorite.
His Italian Cypress is a close 2nd.

Macbeth said:
Tom Ford Tuscan Leather is my latest favorite.
His Italian Cypress is a close 2nd.
Click to expand...

I have owned both.

Dolce Gabbanna Light Blue is my current. The wife and the women at work love it.

Sent from my SAMSUNG-SM-G920A using Tapatalk

Oud Wood and Bois Marocain by Tom Ford are the two I wear.

I usually prefer aftershave over cologne for its more gentle aspects. It is so easy to go overboard on scent that I'd rather use too little than risk too much.

I usually buy scents from Hermès. It's really worth the buck.

My favourite non-Hermès perfume is L'Homme Libre by Yves Saint Laurent, which is decent for the cold season.

The best Hermès scents for the Ladies:
Voyage d'Hermès
Un Jardin Sur Le Toit
(both of which are actually unisex colognes)

The best Hermès scents for the Gents:
Terre d'Hermès (my favourite)
Rocabar

The so-called "Hermessence" product line is available exclusively in Hermès Shops in any major city. They are immorally expensive (130 € for 4x15 ml, or 220 € for 100 ml), but the smaller collection "any four for 130 euros" seems a fair deal.

Zachary said:
The best Hermès scents for the Gents:

I sampled un Jardin en Mediterranee several times but felt the performance lacked. Otherwise I would have purchased this fragrance.

Aramis and Tuscany. Back in my young single days, I used to combine Tuscany cologne with the scent of Yardley English Lavender brilliantine in my Tony Curtis hair. I knew the girls loved the combo but, alas, I was too young and naive to capitalize on it back then . . .

Aramis has just released a newer version of their classic, MODERN LEATHER. You can find it at Macy's. I have it but have only sprayed my hand twice. I am saving it for the right moment. It's ok, a clean office friendly barber shop type fragrance. It has nothing to do with the original. It comes as an EDP for around $75.

I also purchased the regular Aramis soap on a rope to go with it.

I'll check it out, thanks Sonero!

I never wear cologne or fancy after shave but I did hang out with a friend's university class as they experimented with pheromone concoctions. My take was that they were surprisingly effective when you give up your hope that the result will be magic. That's about as opposite an experience from wearing classic scents as you can get but it was ... interesting. Some formulas seemed an attractant for women of a certain age and irritant for younger girls and the way to get you face pushed in by aggressive guys who want to prove (or, like bouncers, professionally need to prove) their dominance. There was even one that seemed to impart an air of authority.

Maybe it was all coincidence. Hearing about it I was ready to call BS immediately, but after being there I suspect that there is something to it.
You must log in or register to reply here.

B
Help me find open pant hangers of a proper material?

Friday at 7:11 AM
BigBrother
B

B
Help me decipher all the lower fastening parts of a traditional bib evening shirt?

Jul 2, 2022
BigBrother
B
B
What is the point of trousers’ second button?