Okay, here are pics of my new jacket, custom made for me by Dave Sheeley, who did an incredible job. But I apologize for my inability to get pics uploaded properly! I used to use Photobucket, which no longer works, and I have tried ImgBB which I could not get to work. So I uploaded directly, and they came out sideways!

Combine that with bad quality pics -- too dark here to get crisp shots without a flash, and the flash pics don't look great -- and these are not the best introduction to the jacket, but you'll get the idea. I will write more later about the story of the jacket and how Dave and I came up with it. But for now, enough talk and more pics..! 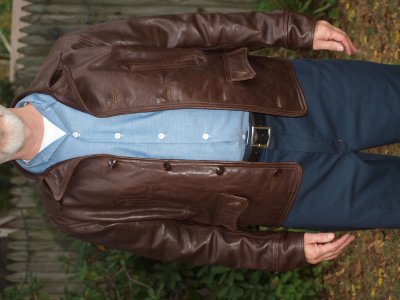 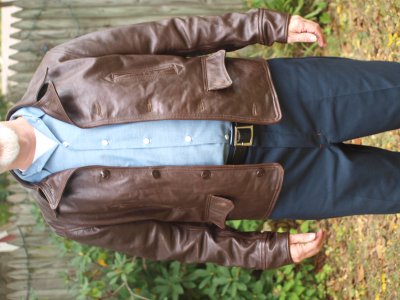 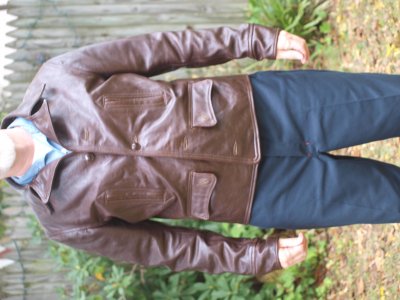 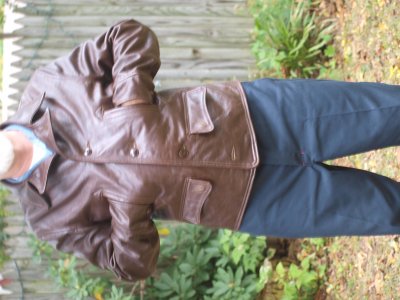 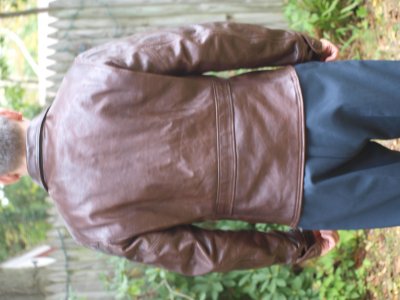 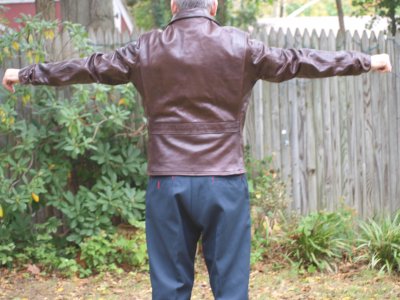 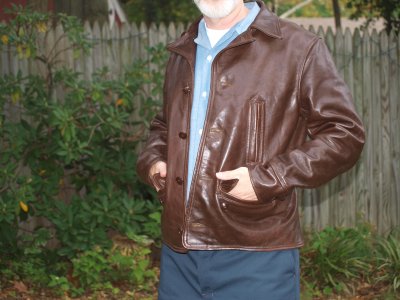 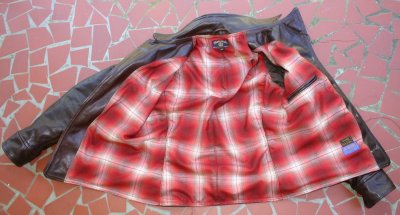 Perfectly designed and executed jacket. Not only does it look great, the mobility in it seem great judging from the raised arms pic and that action back is barely visible in relaxed state. Congratulations!

Stunning jacket! Perfect fit!! Man I need to get to know Dave S. This is literally perfect in every way I can possibly imagine. The design, hide all of it. I can't think of a single element that could be improved upon. That jacket is 100% bad ass perfection. Congratulations Lina. That's a stone cold stunner!!

Awesome!
Congratulations on a great jacket.

That's a real beauty lina and the fit couldn't be any better. Congratulations!

Who is Dave Sheeley?

I like it. Nice choice to go with the buttons. Fits well ,looks great. It is something different and daring.

It has French seams.

Lina that jacket is the one!

Here is another Dave Sheeley.

It's cool to see a maker go after some patterns a bit outside the usual vintage suspects. I really, really admire this stuff. Something totally unique from the M/C and flight jacket regulars that so many makers offer these days.
Dave S definitely has talent and a good eye.

Plus the superstars gottta make room for the some new guys. Unless someone has a DC in 44L they want to unload cheap

Thanks for all the comments! Yes, it's a great jacket and I am very happy with it. I'll say a bit more here about Dave Sheeley and the jacket's history. I know there are others here who know Dave much better than me. He posts occasionally as Mavrickson, and has done repair and restoration work on some Fedora Lounger's jackets, as well as occasionally producing his own jackets from scratch. In addition to the jacket linked above by @jonesy86 he also made this beautiful HH aviator style jacket, which I know got some attention on the Lounge when it first came up and which I see is still for sale:

I think I was probably steered toward Dave by Terry Mitchell at some point, when i was thinking about having some repair work done on another jacket, but eventually asked him if he might be interested in building me one from scratch, and he was up for it. So here's the story of this jacket:

Almost years ago, just out of college, I broke the bank and bought a button front, brown leather jacket from Wilson's in the mall, probably for $100 (it was a small bank back then and easy to break...). I loved the jacket and wore it for 25 years until the lining was finally shredded. I began looking for a replacement jacket and thus found my way into the addictive world of high end jackets. Been looking for the last couple of years for a real replacement for it, but never quite found the right thing. So when Dave said he was willing to build me one, we were on.

I've always like the 1930s/40s (I guess, though I am not an expert) work jackets, and I like an action back and some interesting pockets. Inspiration jackets for this one included a vintage Sears Topline, the newish Freewheelers Switchyard coat, and some other vintage jackets. And the lower pockets were inspired by Terry Mitchell's very cool Rough Wear. (Pics attached.) I really like Terry's jacket -- it's probably my all time favorite non-button front jacket. I had though for a while that I wanted a vertical zip chest pocket like that jacket has, but eventually decided that it might not work with a button front, so following the Sears and the Freewheelers went with the high up handwarmers. I know what @Mark means by them being a bit odd, but I like how they add an interesting dimension to the front, and of course they are functional enough for handwarming. Dave has his own design for a half belt with full action back, as seen on those other jackets, and it looked great to me, so we went with that for the back. We had thought originally to have button tabs on the halfbelt, but with the taper Dave's back has built in we decided we didn't need them and left them off. I like the cleaner look. Dave modified the lapels a bit from the inspiration jackets, modeling them on vintage Monarchs.

The leather is Italian horsehide, the same as on that aviator style jacket linked above except overdyed by Dave to make it darker. I expect eventually the lighter tan will start showing through very nicely. Dave says it's from a tannery in Pisa, and is apparently the same leather that Aero calls Vicenza. I am a fan of plaid linings, and looked around quite a bit trying to find the right material. It is harder to source than you might think! I found the one you see here on Etsy; it's Pendleton worsted wool, smooth and not at all grabby. It's a bit thin, so Dave doubled it up in the jacket to give some weight and warmth. For some reason my pics of the lining and the labels would not load here, but there are two labels from Dave (a Monarch and a Genuine Horsehide label) and then also the Pendleton Mills label. Most of the seams are double stitched, and there are a lot nice details owing to Dave's craftmanship, such as the arrow stitching at the top and bottom of the handwarmers, etc.

Overall I am very happy indeed with it, and I feel like I've finally gotten that old jacket of mine properly replaced. Just a few quibbles: I wouldn't mind if the leather were a bit thicker, and I wouldn't mind an extra inch or so of length in the back and maybe one less in the sleeves. Of course the sleeves may shorten up a bit with wear, and if not I can eventually have them altered if I want.

So, thanks again for the feedack! Much appreciated. I will post some more pics of details and some close ups of the leather and stitching at some point.