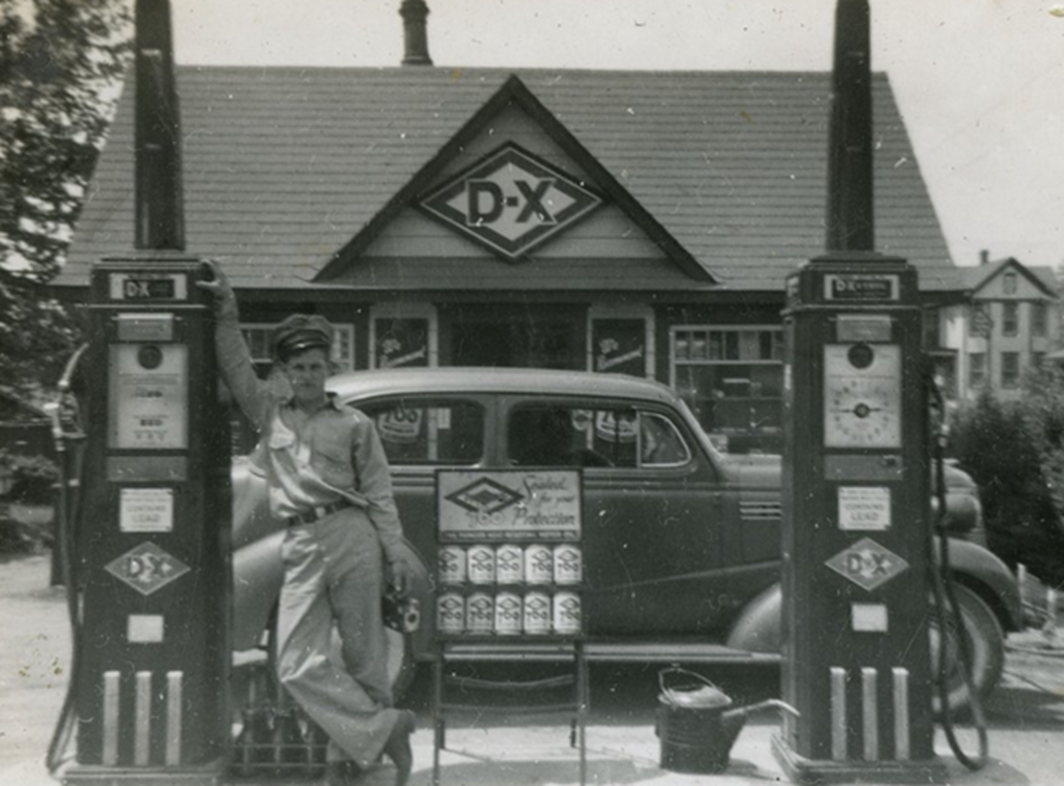 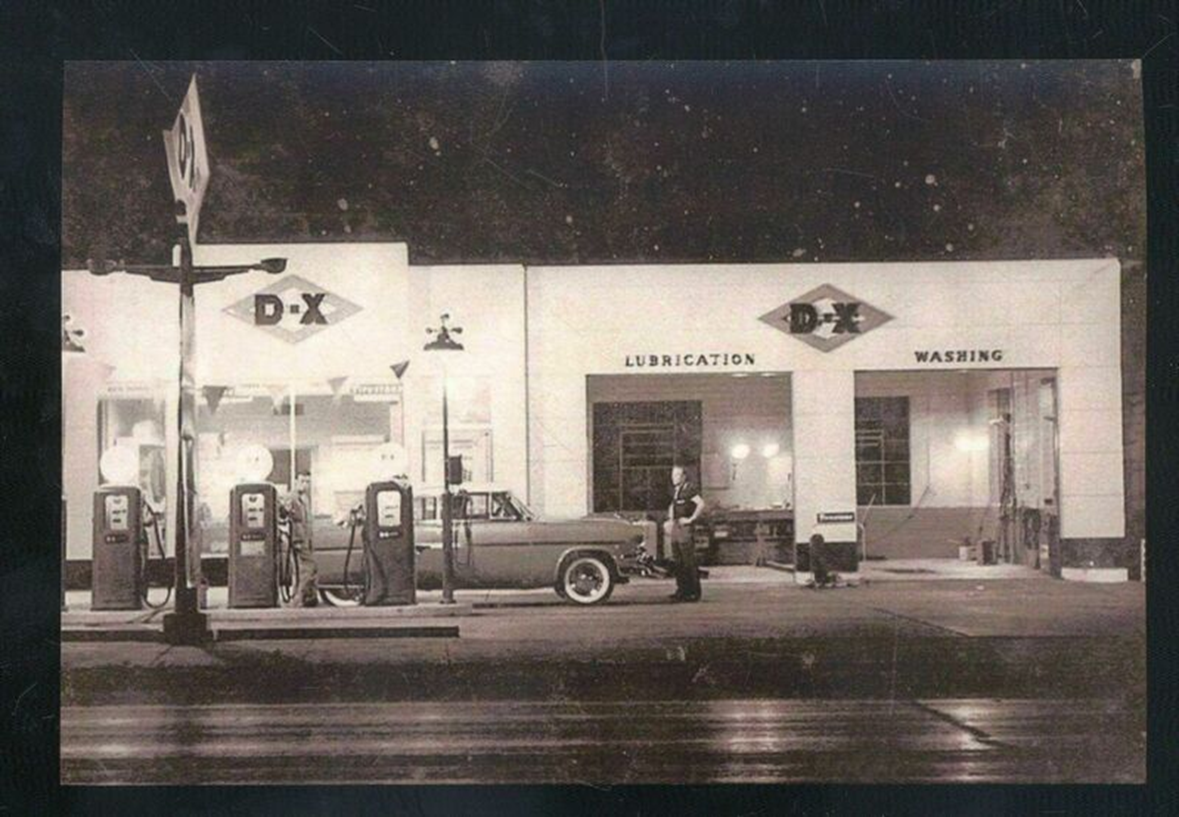 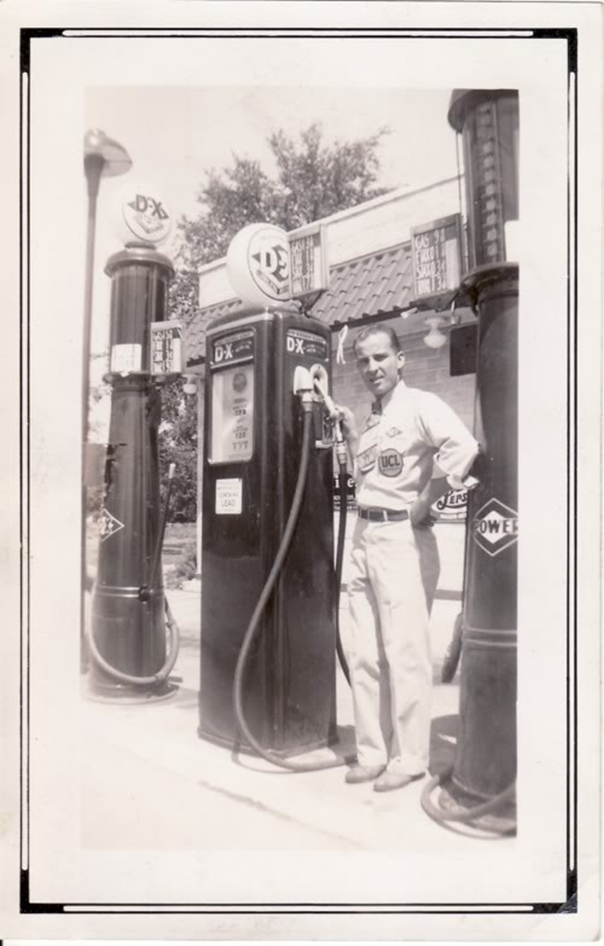 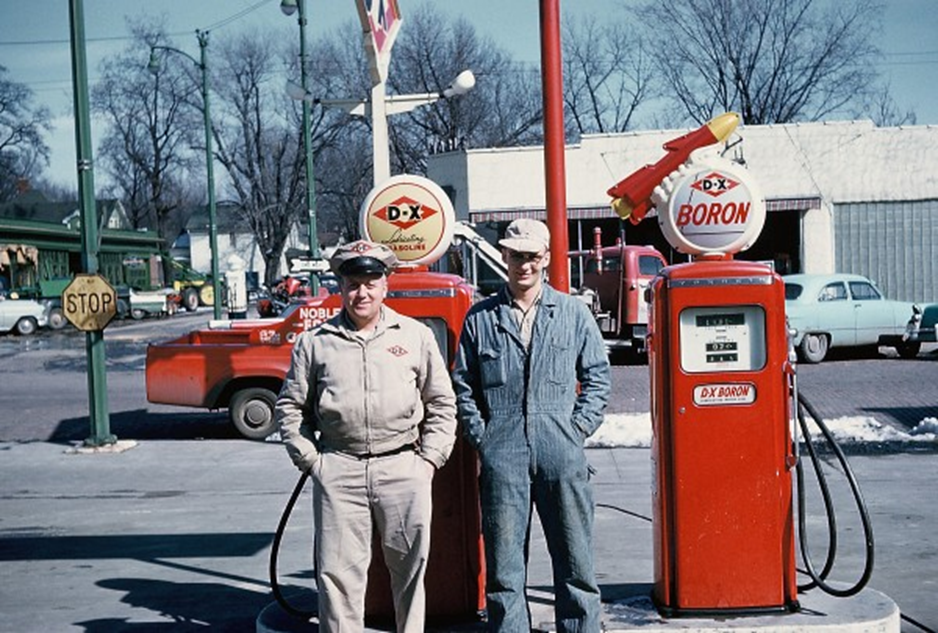 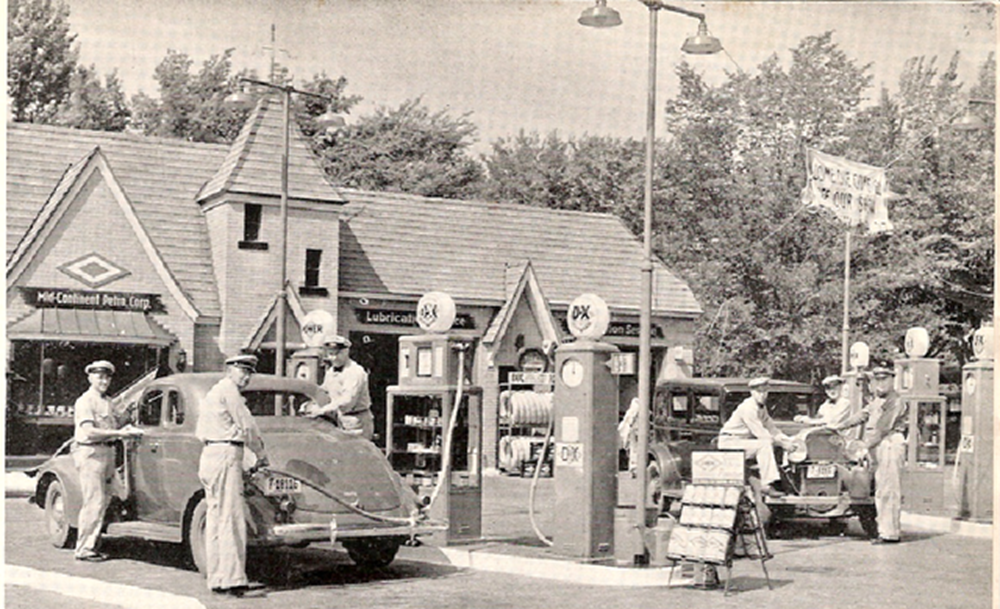 Speaking of D-X, I just love this little station design. 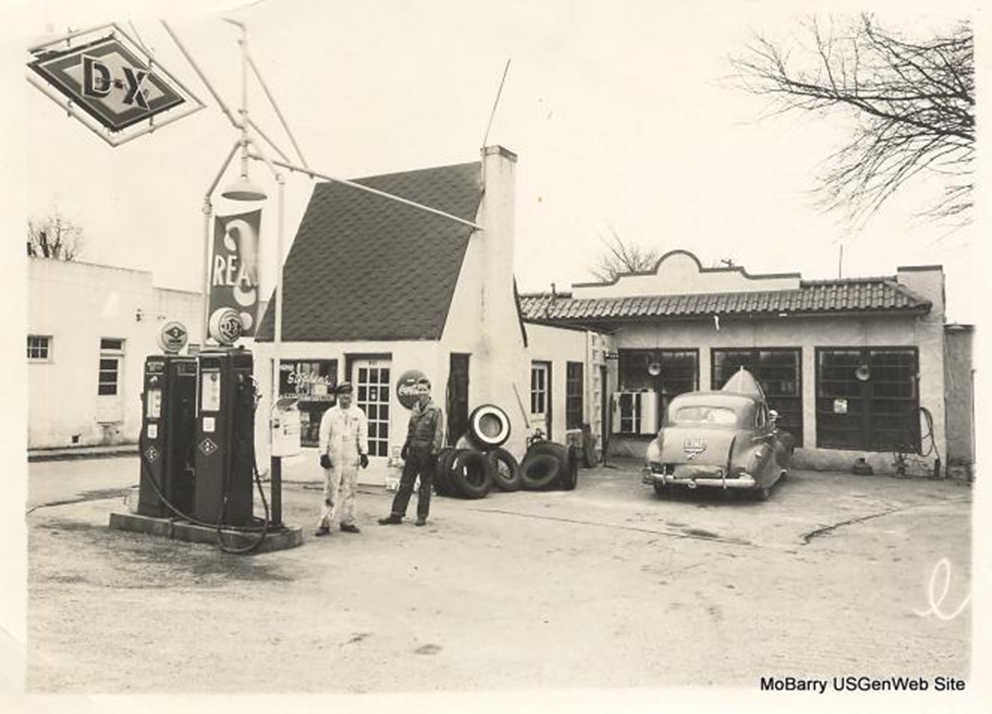 It's still there in Cassville, Missouri. 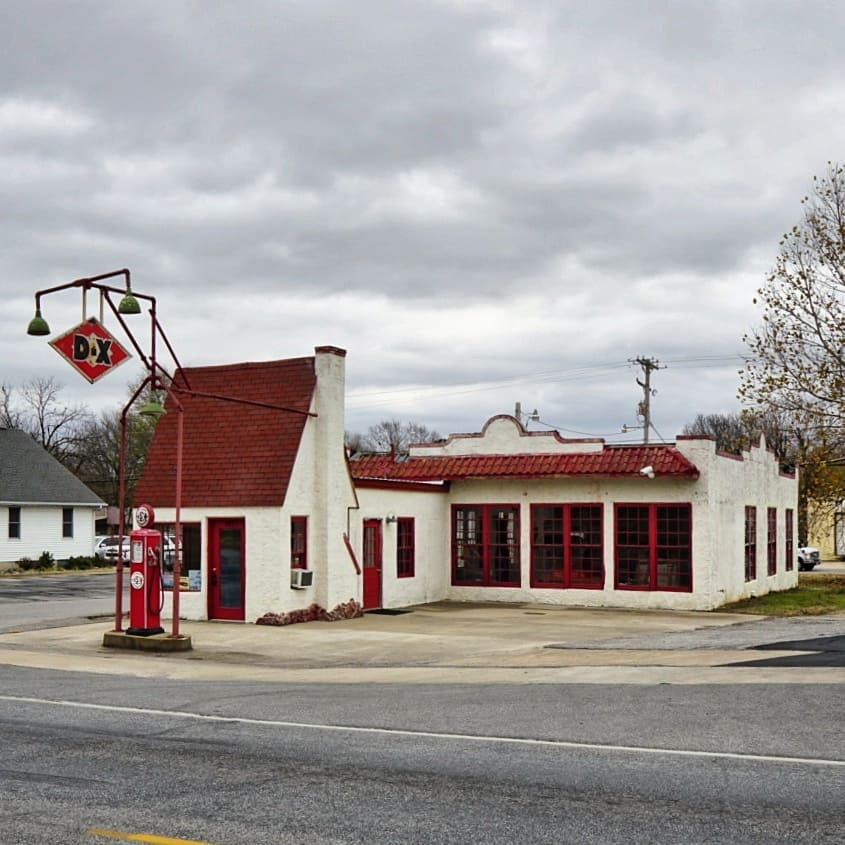 Colorado Springs, Colorado. 1965. I'd love to have that stretched Suburban! 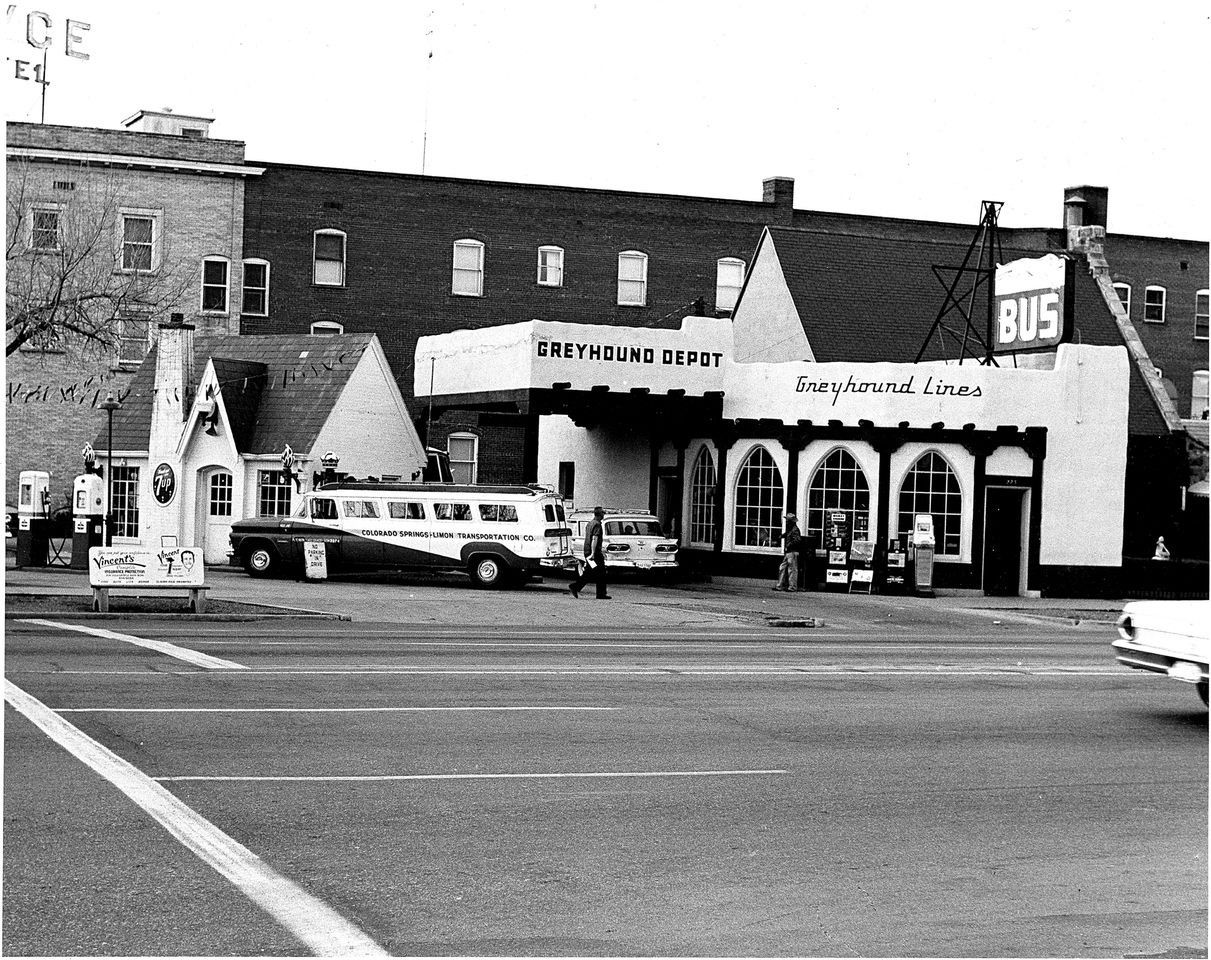 BobHufford said:
It's still there in Cassville, Missouri.

Not necessarily a gas station, but related: 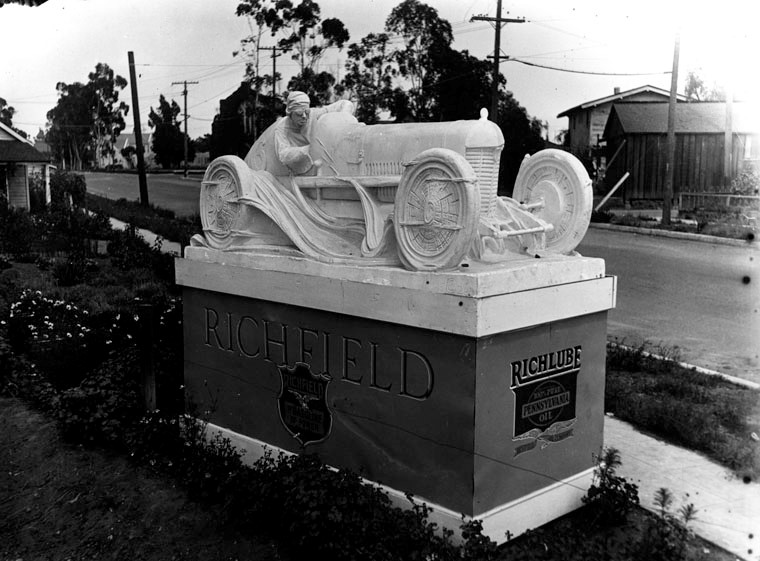 Photo of "Modern Speed," a statue by Finn Frolich located on Redondo Boulevard, near Inglewood. Frolich modeled the driver after racer Tommy Milton. The sculpture served as a model for large-scale monuments installed at Richfield service stations around the region as advertisements. Photo dated: May 24, 1926.

BobHufford said:
Colorado Springs, Colorado. 1965. I'd love to have that stretched Suburban!

You take the Suburban, I'll take that station wagon that's parked under the overhang. 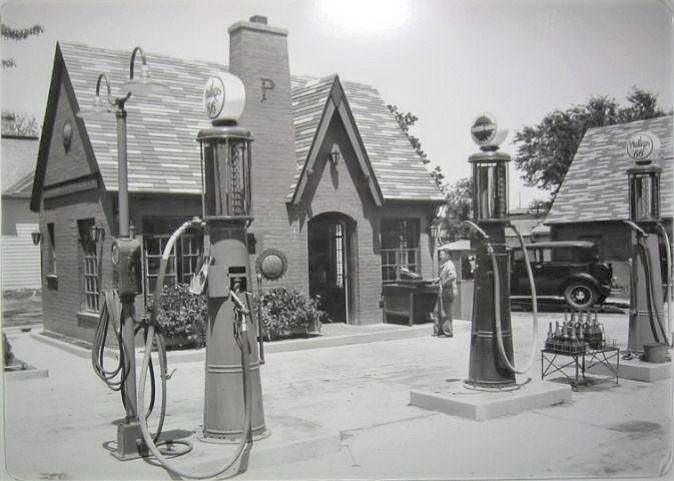 Boy, Santa must really have trouble getting in and out of that chimney.

Location
Back in the Biggest Little City

My first post here in a looooong time. My first real paying job was as a pump jockey in a Chevron station in the mid-to-late '70s, when I was in high school. I had a uniform and everything. If things were slow, I also did oil changes and lube jobs, as well as tire mounting and balancing. We had a professional mechanic for the big stuff. Every car that stopped for gas got the full treatment: wash the windshield; check the oil, transmission fluid, water level, tire pressure, and basically anything else the customer wanted. It was a lot of fun.

Strangely enough, we had both a Chevron and a Standard station in the same small town (<1,000 people). The color schemes and graphics were identical, except the one I worked at had "Chevron" on the shield, while the other one had "Standard." I think the difference was that Standard was company-owned, while Chevron was franchised. Both were Standard Oil of California. There was also a Shell and a Union 76 in town. We were on a fairly major highway and there was enough long-distance traffic to support four gas stations. 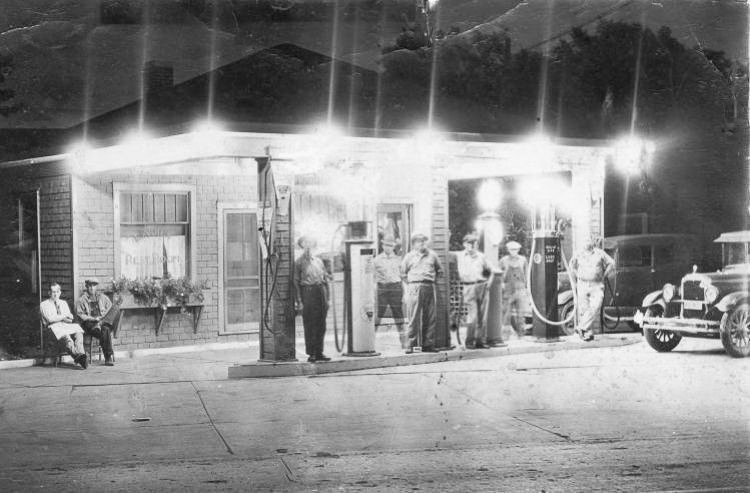 BobHufford said:
Colorado Springs, Colorado. 1965. I'd love to have that stretched Suburban!

Remember airline limousines? They were usually sedans or station wagons stretched to have four doors on each side — a fairly common sight in the early 1960s.

The last ones I recall seeing were a pair of Checkers left to rust away in a lot in Olympia, Washington. That was going on 10 years ago now.

tonyb said:
The last ones I recall seeing were a pair of Checkers left to rust away in a lot in Olympia, Washington.
Click to expand...

The church that hosted the Boy Scout troop I was in back in the early 1970s had a pair of Checkers. 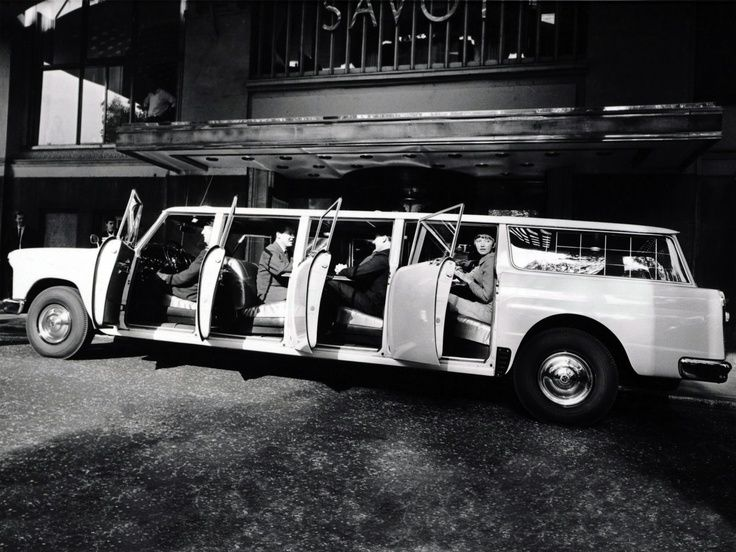 BobHufford said:
The church that hosted the Boy Scout troop I was in back in the early 1970s had a pair of Checkers.

Yup. The pair I alluded to were the same model. I showed them to a friend who owned (and still owns) a ’66 Marathon, to satisfy his curiosity, mostly. He determined, as any sane person would, that those two airline limos were so far gone as to be good for parts only, and not many of them. He’d already sunk a borderline crazy amount into restoring his regular old Marathon sedan. “I did it for the same reason people climb mountains,” he said. 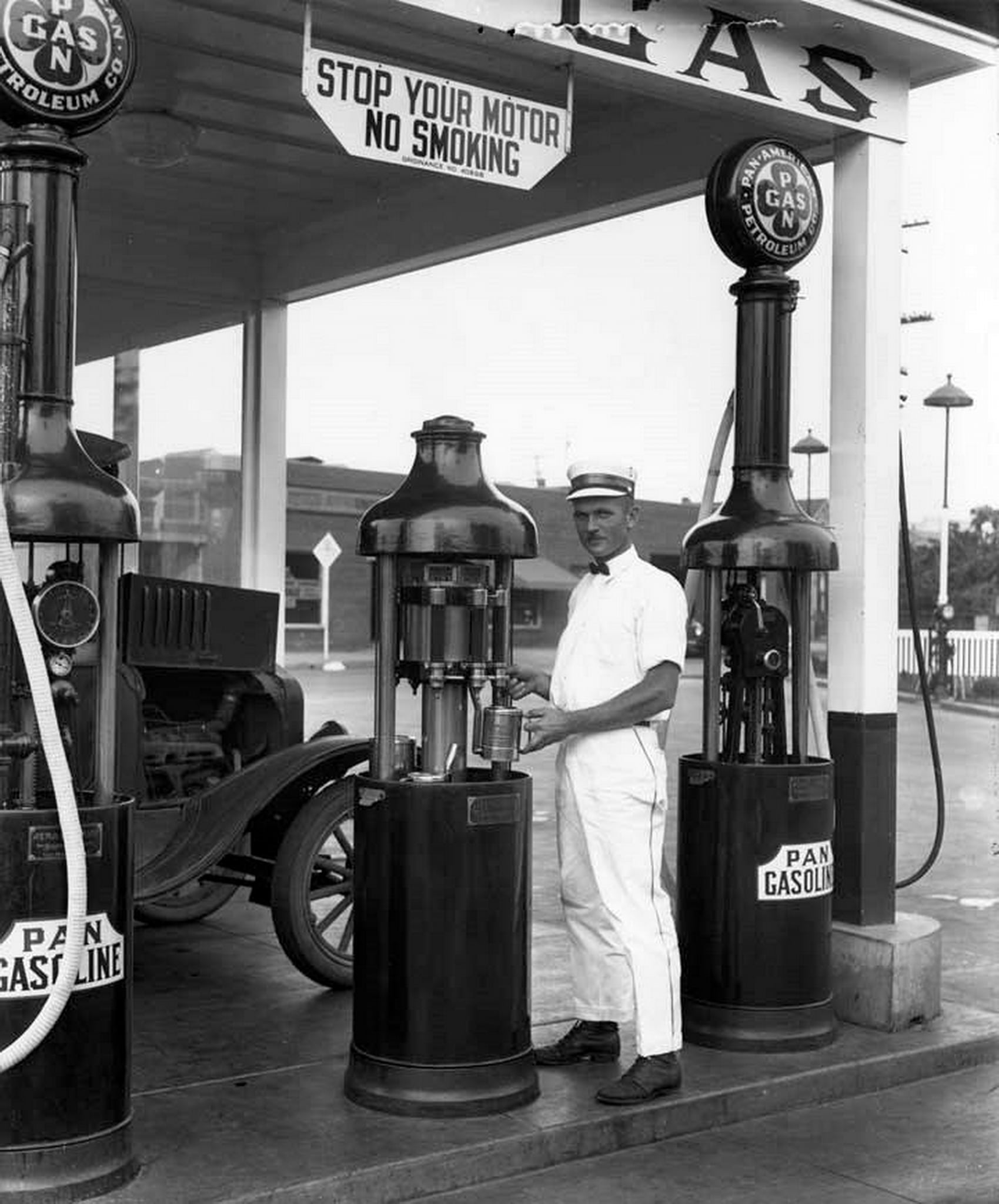 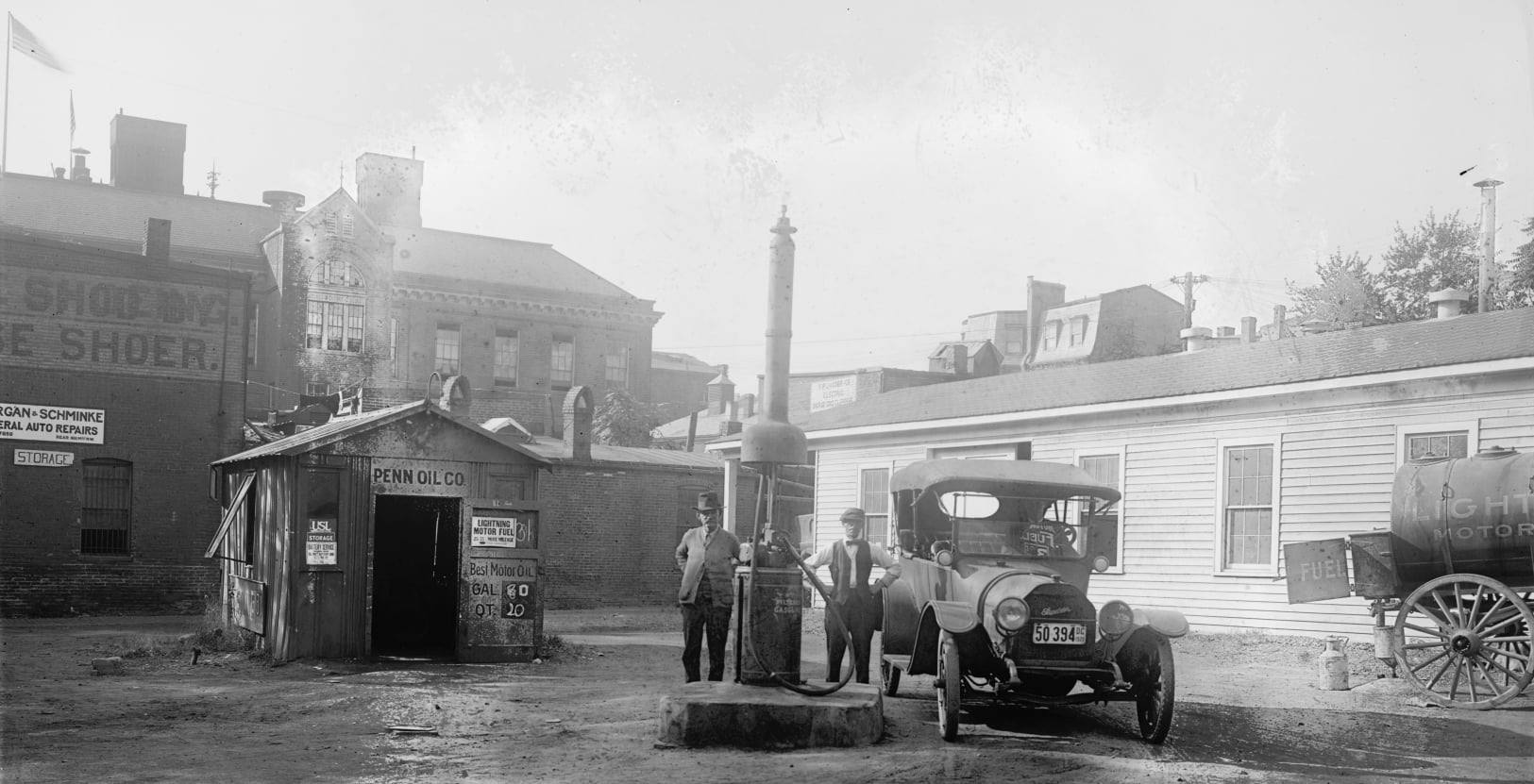 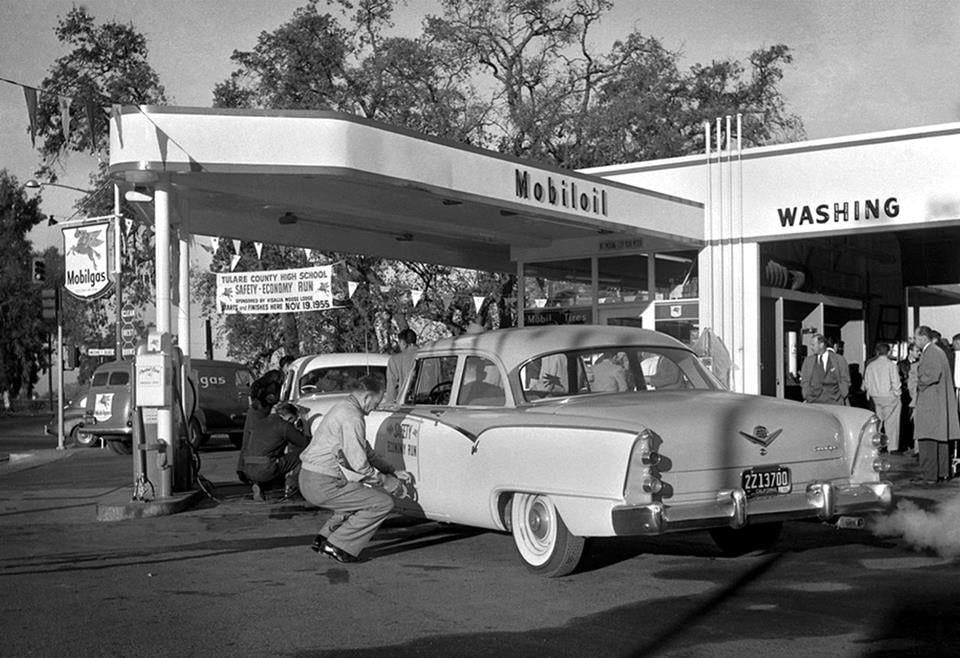 Despite that Dodge having the aerodynamics of a brick, I wish it was parked in my driveway with my name on the pink slip and the keys in my pocket. Simple, honest transportation. 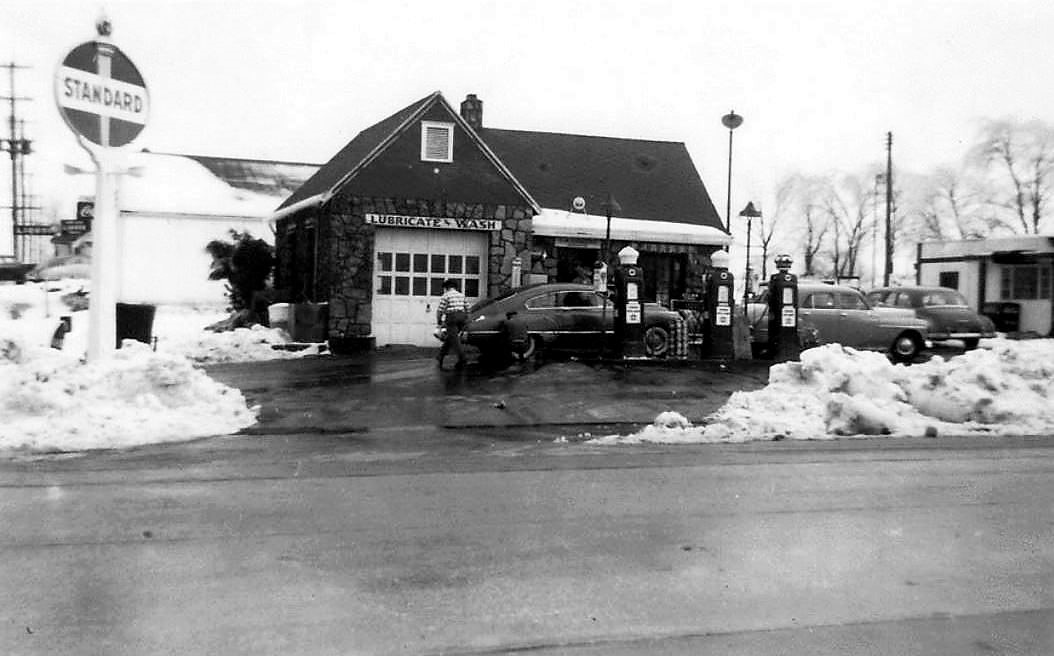 June 2, 1946 – VM (Sandy) Sanders became the owner of the Standard Station at the corner of St. Louis Street and Glenstone in Springfield, Missouri across from the Rail Haven Motel. He would own it for the next 53 years. 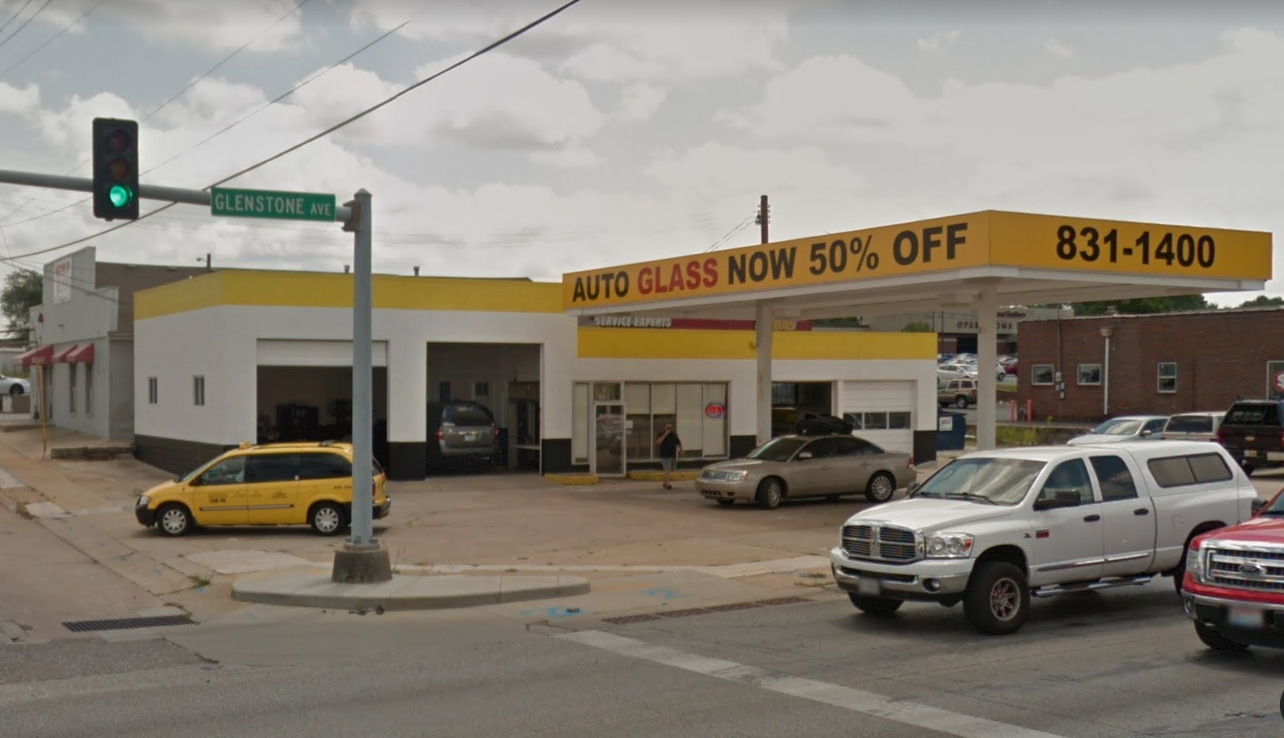 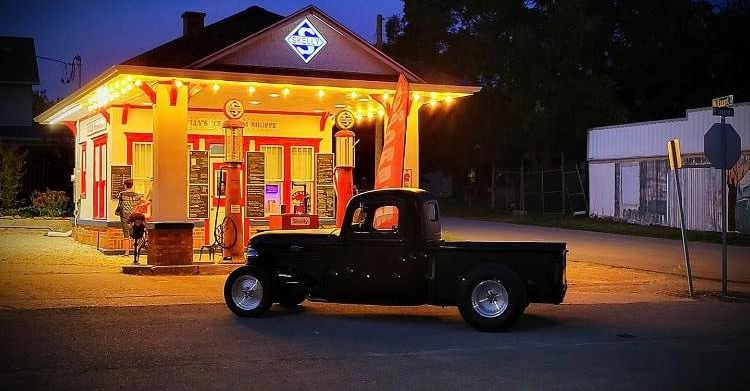 Highway 61 between Arkansas and Missouri. Part of the Spanish El Camino Real or Kings Highway between St. Louis and New Madrid. 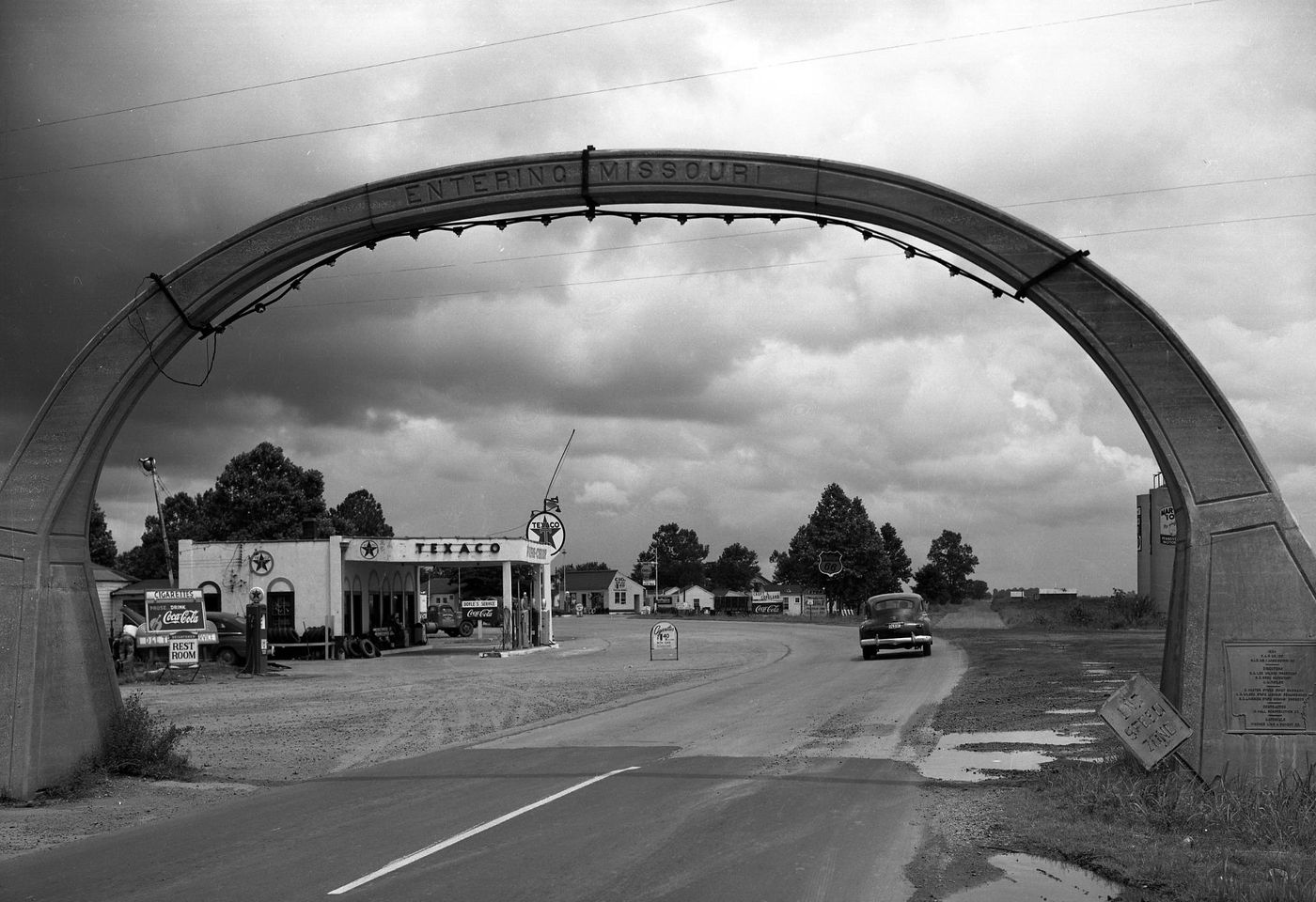 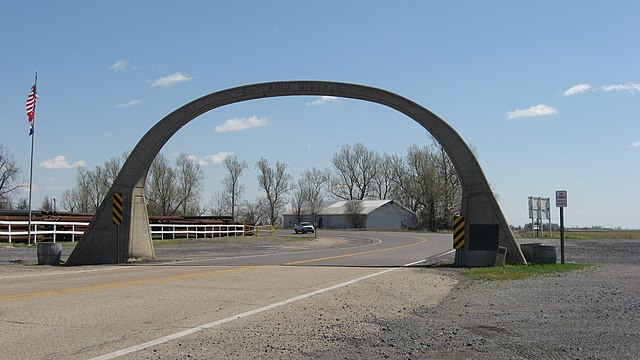