Recently, the bug for a modern production Stetson Stratoliner hit me. However, being one who likes to shape his own hat, I hit the wall. The hat is made with a factory crease only. Matter of fact, all of the modern Stetson dress hats I've seen have a factory crease. Nothing wrong with that, but the option of having an open crown is one that I think should return to the Stetson lineup!

Enter a photo I saw on Facebook this morning that made my jaw drop. 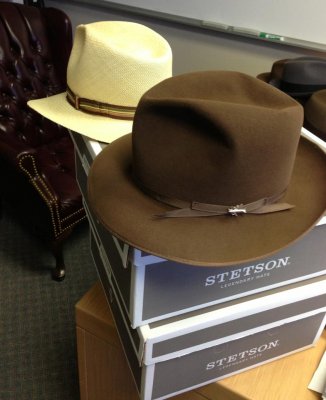 THAT is a modern, open crowned Stratoliner made on an original block, and I think it looks amazing!

They do exist, or at least can exist!

Following up on this pic, I was told by someone at Stetson that these CAN be made, but that retailers haven't expressed interest in selling them, so Stetson hasn't! That's a terrible shame! Retailers, why not strongly consider ordering some open crown options for your customers?! I, for one, would pledge my patronage to you and Stetson if this would happen! I know others would jump on this, too!

And now, fellow Loungers. Please add your voice to mine in saying to our vendors "WE WANT OPEN CROWN STETSONS!"! If enough people say they want them, and retailers step up to order them, it can happen!

The bottom line is, Stetson is ready willing and able to make these, all it would take is orders. So please, retailers, order already!!

Yours sincerly, an unusually empassioned,

Retailers probably don't express any interest because the Nostalgia sold so poorly.

I would but them if they sold them open crown and with a fur blend that wouldn't misshapen in rain.

We tried to work directly with Matt Range of HatCo on an Open Crown version of the Stratoliner & actually got a couple of prototypes for review. Matt has disappeared, along with that hat he promised to return. No replies to emails or phone calls.
We are not a blip on the HatCo meter for fedora hat market segments.
Most western stores are set up to crease hats but not "dress hat" retail stores.
Sure some of us like to shape them ourselves but not even all of us care to do it.
I got 2 of the last of the Open Crown Biltmore Open Roads which is what the new modern HatCo Stetson Stratoliner should've been.
What HatCo is able to make & what they are willing to make in substantial number with varying sizes are 2 different things.

Not to defend Hatco, but they did try an open crowned hat in the Nostalgia. How many of us stepped up and bought one? And yes I'm as guilty as anyone. Liked the hat, wanted to buy one, but kept finding other things to waste my money on (junk like food and house payments - what a waste!). Then it was discontinued and now I wish I'd bought one. Will they take a chance like that again? Probably not.
T

Getting back to the original statement. Stetson WOULD make them, if retailers get enough requests. The question remains, who would be interested in buying one (quite a few of us, I suspect), and what retailer is willing to order? It's not about us "being a blip" on their radar, it's about getting a retailer who's willing to make it happen and order. It's all about orders.

I saw my name mentioned. I still watch the board, but I don't have as much time lately to participate. We've made several prototypes at our expense and are always willing to provide open crown styles to retailers who wish to carry them.
T

HATCO said:
We've made several prototypes at our expense and are always willing to provide open crown styles to retailers who wish to carry them.
Click to expand...

I saw my name mentioned. I still watch the board, but I don't have as much time lately to participate. We've made several prototypes at our expense and are always willing to provide open crown styles to retailers who wish to carry them.
Click to expand...

Has everyone forgotten how hard Major Moore worked on this. We just could not get quality to where we were happy with it. A search here will give more details.

There it is. The problem from the first days of the Lounge. As soon as we talk "let's have this made!" It gets bogged down in "I'll only buy it if it's exactly my thing." Which is altogether correct. Who wants to spend money on something that isn't what they want? But the thing is, they wouldn't have to make an open crown hat (and get retailers to stock it). They'd have to make dozens of sizes, styles, ribbon widths, crown heights...
T

It goes back to the original post, guys. Stetson can make a modern, properly spec'd [read: like the good old days!] Stratoliner like you see above... made in the good ol' USA, even. Who would like one? What retailer would stock one?

That's what this all boils down to. It's fairly simple, really.

Right, but Major Moore attempted to get that exact thing done with the Stratoliner. We had folks here who were ready to buy.

See this thread for the whole affair: http://www.thefedoralounge.com/showthread.php?55919-Fedorafest-III-Stratoliner-from-Stetson&

There's the rub. Those wanting the old dimensions aren't a blip worth of orders.

It will happen when pigs have wings, at which time you might prefer to put on your Akubra, for practical reasons.

Well, I've enticed a retailer into considering an order for the open crown Stratoliner. GiGi Gaskins at HatWrks in Nashville has expressed interest, and wants to see how many are interested.

The main and biggest problem was Hatco could not over see that the hats all of them ordered would be as we asked, they stated to us and even in the samples they sent a few of us to look at that there was issues that we has hat people did not and would not take.

I say your best bet is allow a hatter to make you a open crown hat, the boxed hat will not be what you want each time,.we had some that came as samples that the ribbon 4 line would be sewn above the thread that was used to sew the sweatband in, and when you snap the brim in front, guess what you saw all the thread.

I was not impressed in the samples nor the desire that Hatco had to make the hat, no matter how many we would order at one time.

This is my two cents worth, you can let Rusty and Tom tell what they saw in the samples we got.

majormoore said:
...I say your best bet is allow a hatter to make you a open crown hat...
Click to expand...

This is probably the key - those who pine for an open-crown hat also tend to have very strong opinions about brim width, ribbon style and width, crown height, etc. The most logical thing for this small subset of hat buyers to do is order a custom lid. The infrastructure is not there to deal with open-crown hats in general retail (e.g. steamers, salesmen adept at steaming and creasing, explaining to customers why open crown is worthwhile, putting a good crease in a hat for a specific facial type, etc.). In the old days there were enough open-crown hats available to function as 'custom' hats, that just won't be the case if Stetson puts out one open-crown hat. I didn't buy a Nostalgia because the brim and ribbon widths were not even close to what I favor. I felt bad, but wasn't going to buy one just to make a point.

Major Moore was the retailer and I an many others where the customers. Money was there Retail was ready Hatco Binked and said no.
Simple answer. Today's retail environment is not set up for full service Hat sales. Most cities in the US do not even have a hat store. Most might have a Western hat store. I can one at the very entrance to my subdivision . While they do carry hat brushes and cleaning supplies they are not set up to Steam and adjust hats to a customers wants like Major Moore's shop. There just is not the instructor of fully equipped hat shop's to support a open crown hat at the level that
Hatco needs to produce the product plain and simple.
You must log in or register to reply here.
Share:
Facebook Twitter Reddit Pinterest Tumblr WhatsApp Email Share Link