So this came up in the jacket-alikes thread that I started... as has been pointed out, "someone" just got the deal of a lifetime. Well, that was me. I just picked this up on eBay for a very good price.

I'm a little baffled by the auction's bid history. As of 2 days before, the price was at $355, with 33 bids entered. Then somehow I guess a bunch of bid retractions happened, or someone got their account canceled, or something, because it suddenly went back down to $167.50 with just 12 bids. Maybe there had been some shill bidding going on? In any case, it went right back up to $355 with 14 bids in almost no time. I wasn't sure if it'd stay within my range, but fortunately I was able to land it for a final bid of $405.

Amazingly, despite only 50 of these being made, there had been a second one on eBay listed at $800 BIN/OBO, and I guess they had sold it about two days before this one closed. So that may give some hint as to what these may go for, if and when one should come up again. They were $990 when initially offered.

I think this seller didn't know what they had. They knew what they had, in terms of they had identified the model number correctly, but based on the seller's other items it looks to me like they might be a pawn broker, not a specialist in limited edition high end leather.

I wasn't even looking for it when I spotted it, but I'd been thinking about finally getting a D-pocket for a few weeks, and this popped up in one of my browsing sessions, and caught my eye... I looked into it more and found out the story behind it, and just had to have it. I'd been considering the ELMC Roadstars that had just been put up, but considering the rarity of this model, and the fact that I got it for less than half of what the ELMC seller wants for his, I couldn't pass it up. I think I got a hell of a deal.

I just hope that it fits me. Looking at the measurements, I don't think it'll be a problem, but you never know until you put it on. 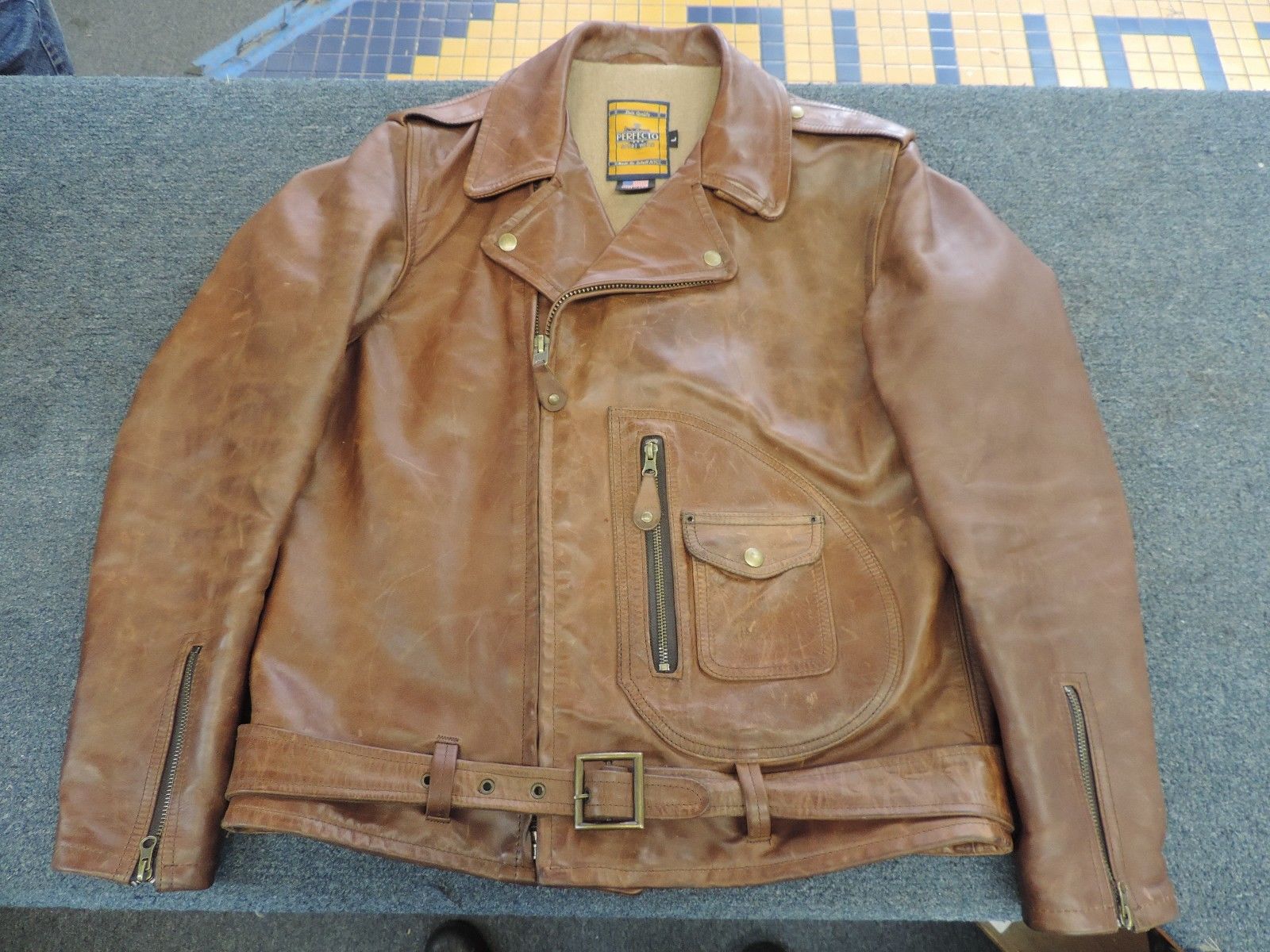 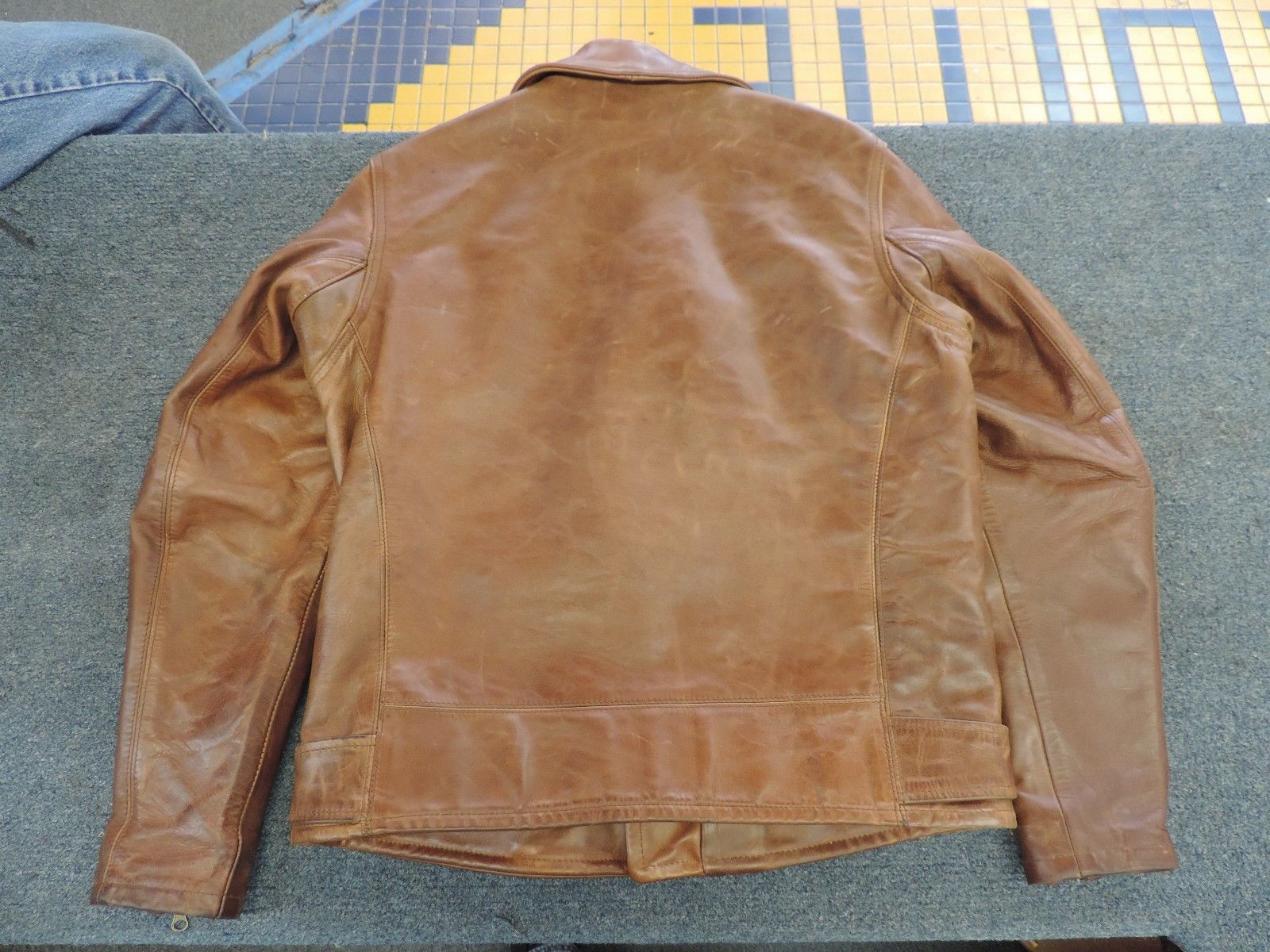 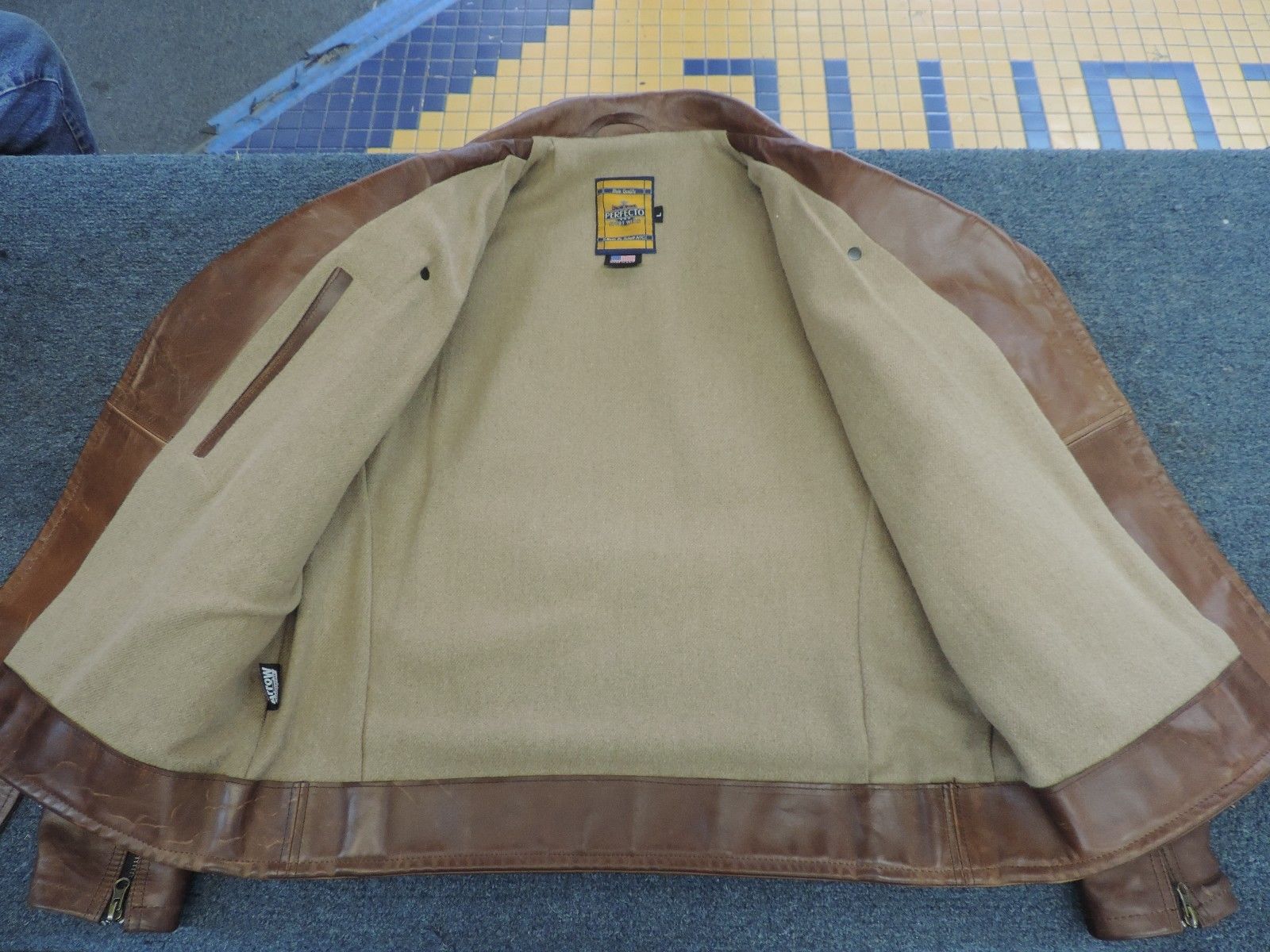 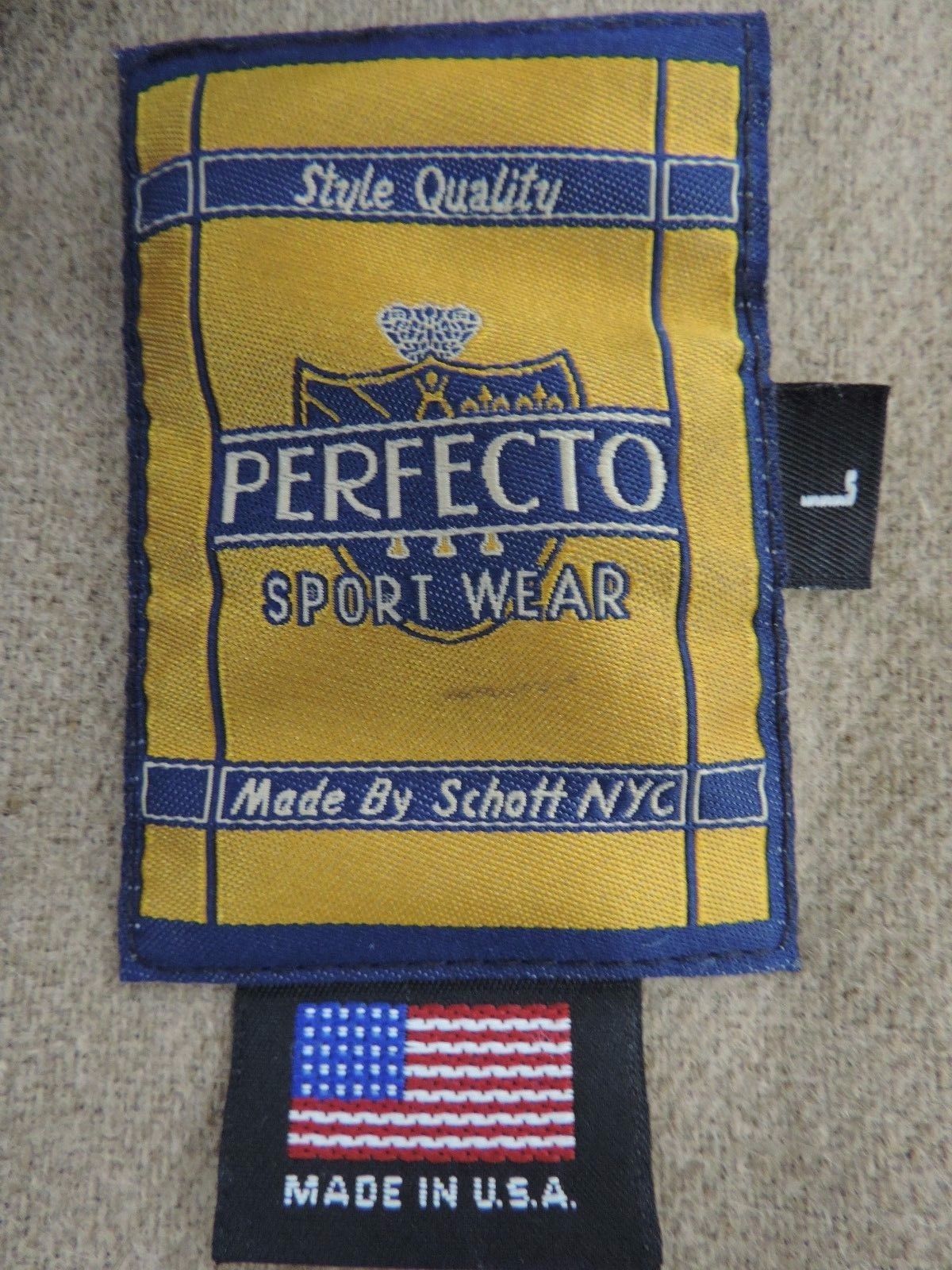 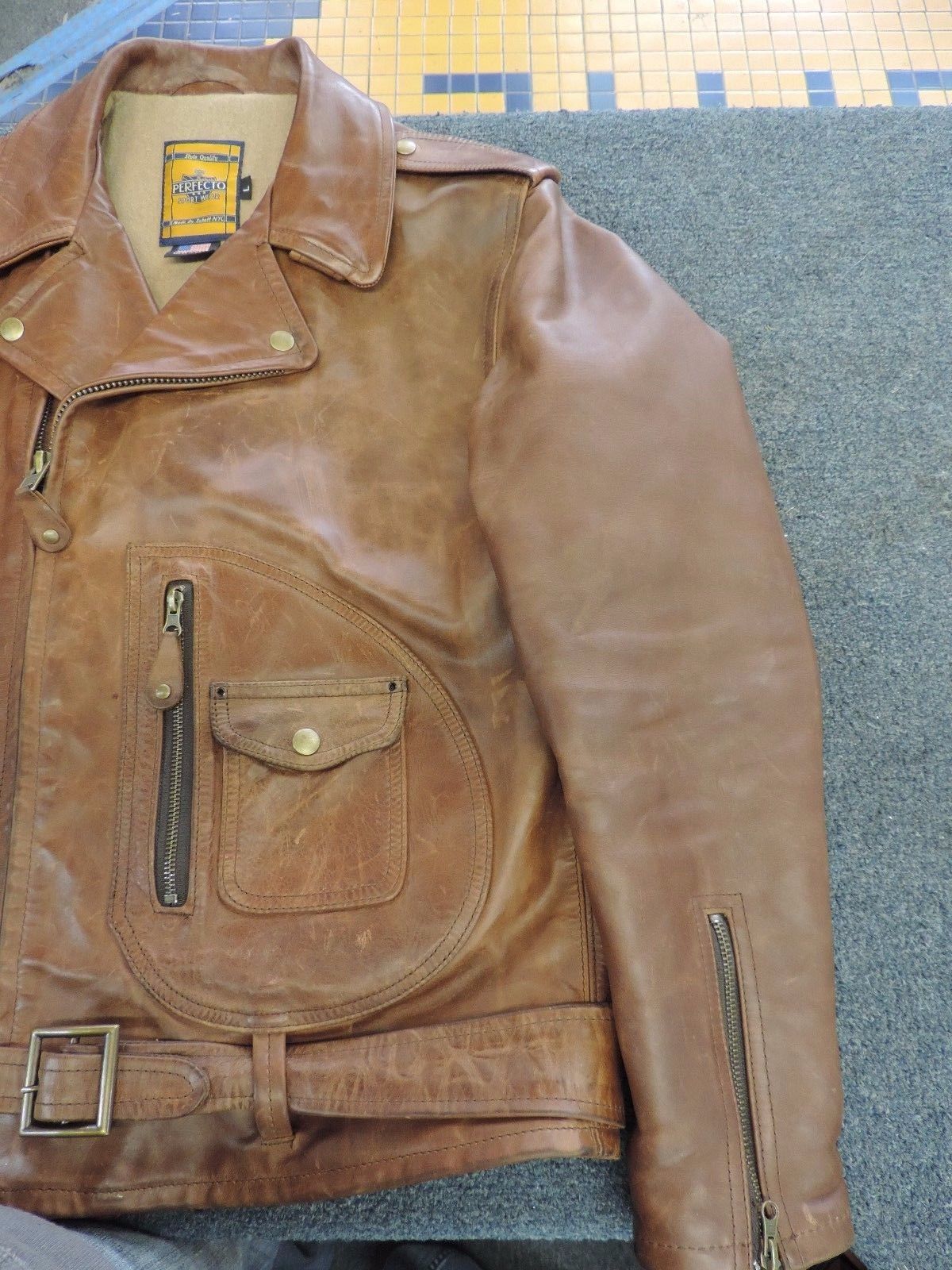 I'll post the obligatory fit pics once it arrives

This is one I am deeply jealous of. End game type of jacket. One that takes care of the style for ever.
T

I've got the same, and I love it! Not a winter jacket, though
Congrats for your score

Nice pick up! I'm certainly jealous! I was so close to throwing a bid on that guy...Please update when it arrives with your own pics!

Nice pick up! I'm certainly jealous! I was so close to throwing a bid on that guy...Please update when it arrives with your own pics!

Guppy, your story reminds me of how I got that Confedi Schott CR. The seller was also some random vintage (second hand) women's clothes store, the photos of the jacket were horrible and the listing said it was in a good condition. And it was literally brand new. I don't think anyone even tried it on. Gail told me they made these jackets in a very limited quantity, just a handful of each size so how do they end up at those random places, I've no idea...
In any case, it's funny. Beck 333 is a highly valuable jacket among collectors with pieces going for over two grands but it was Schott that produced these jackets for the Beck label so this one here, it's the only proper version, still being made from the original patterns. That's why I think you couldn't have done any better.


Kelly cavill said:
Nice pick up! I'm certainly jealous! I was so close to throwing a bid on that guy...Please update when it arrives with your own pics!

I didn't think Schott made bespoke jackets, but this fits me perfectly. I'm in heaven! Pics to come! 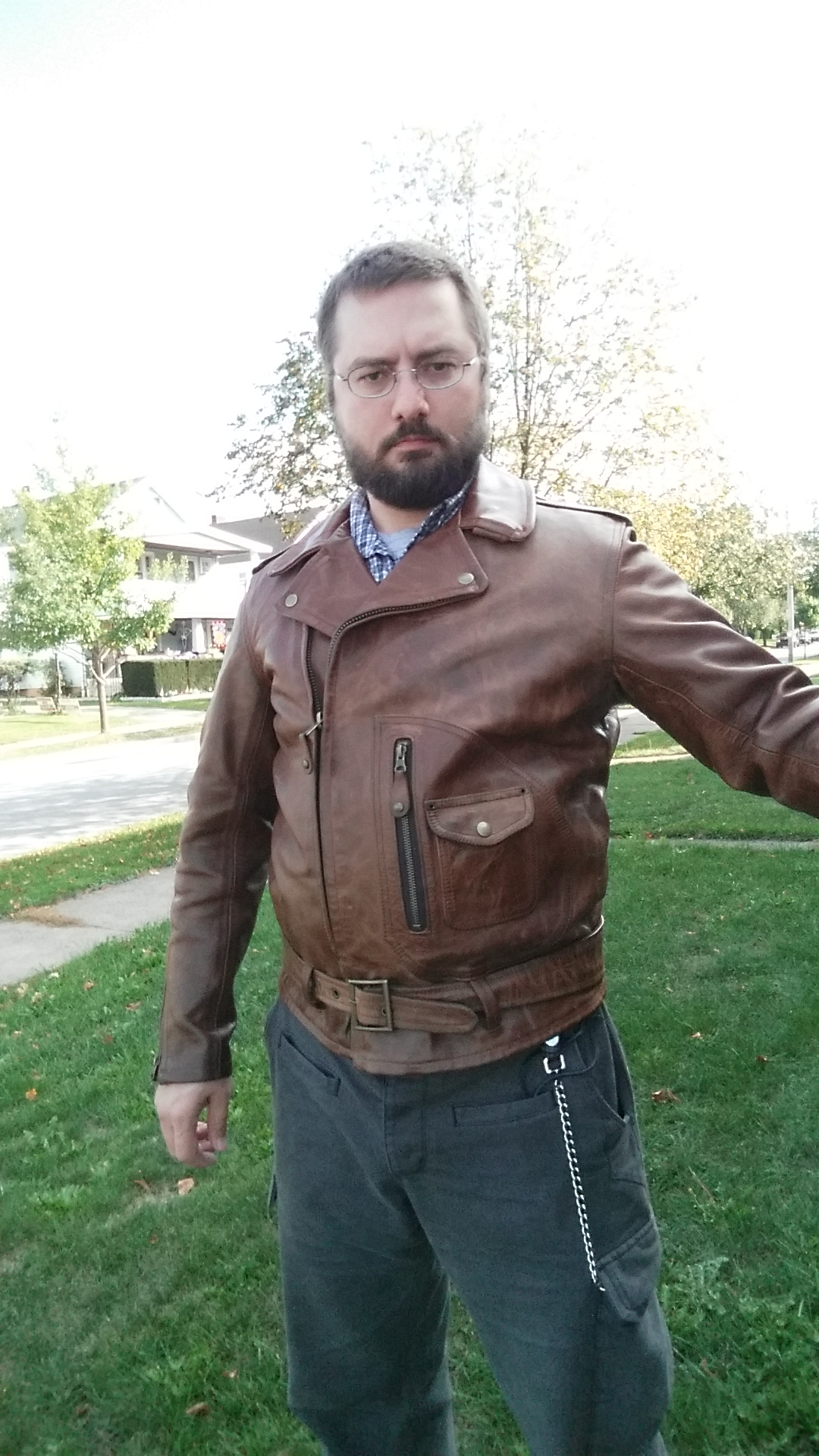 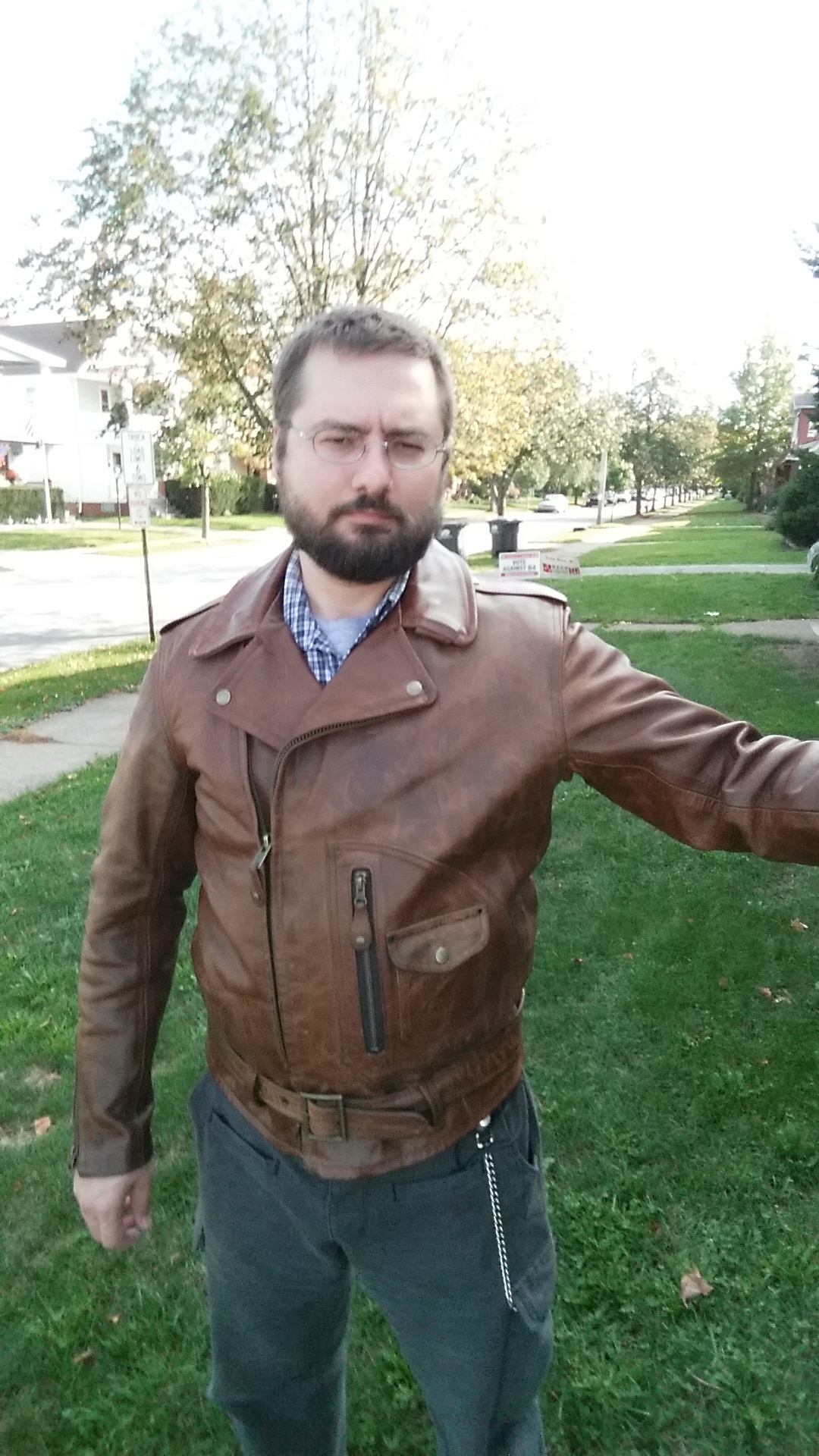 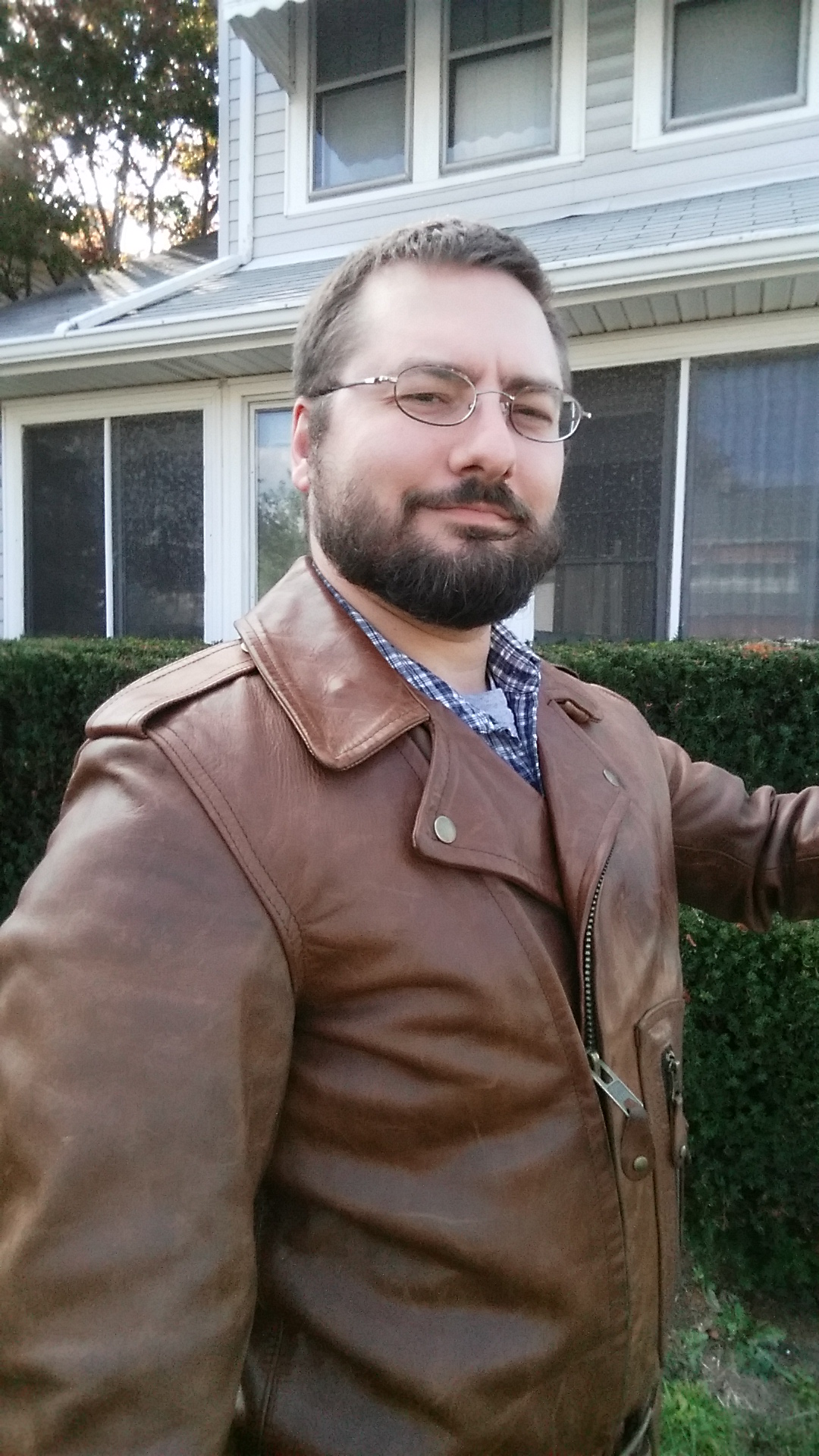 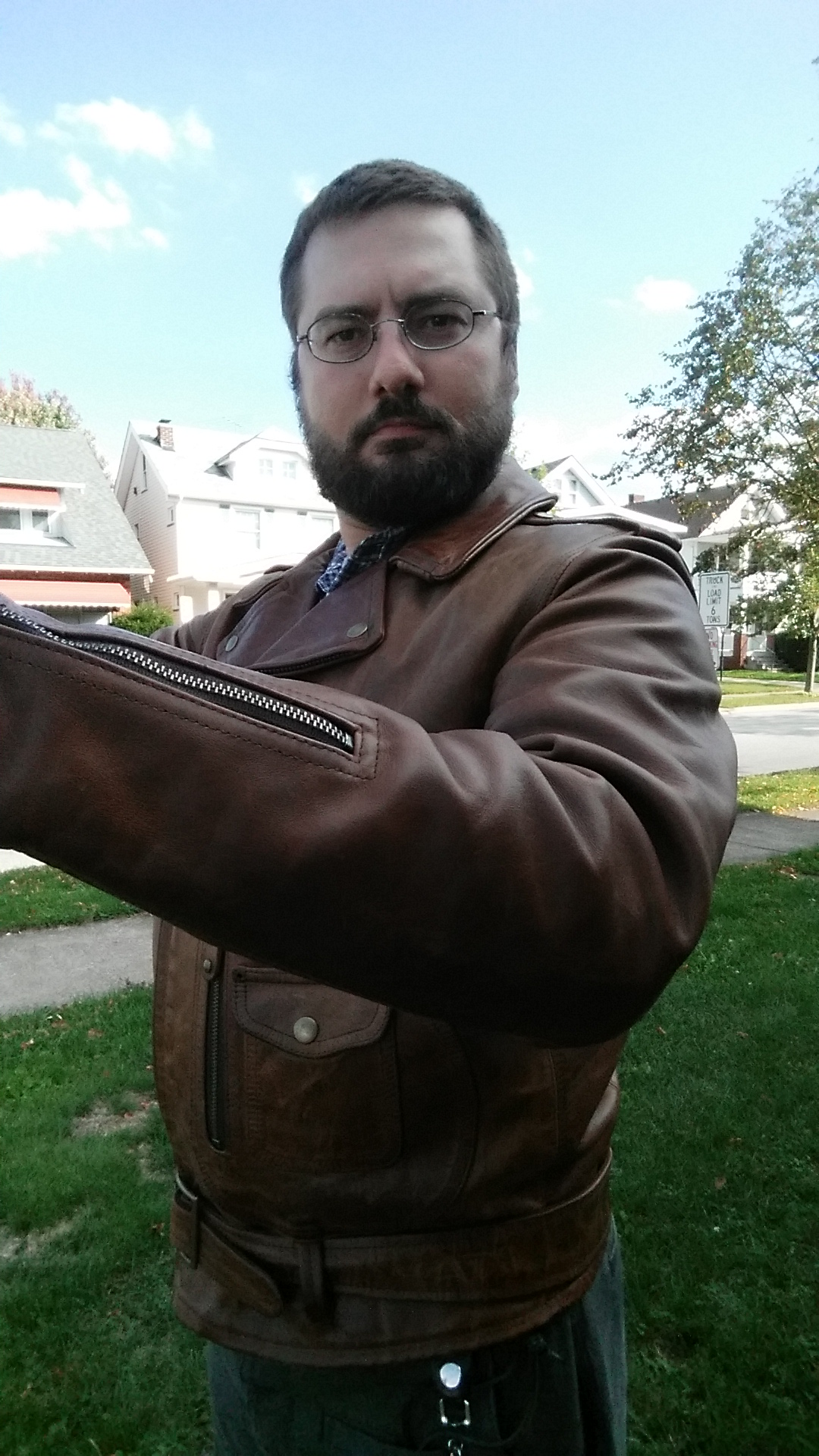 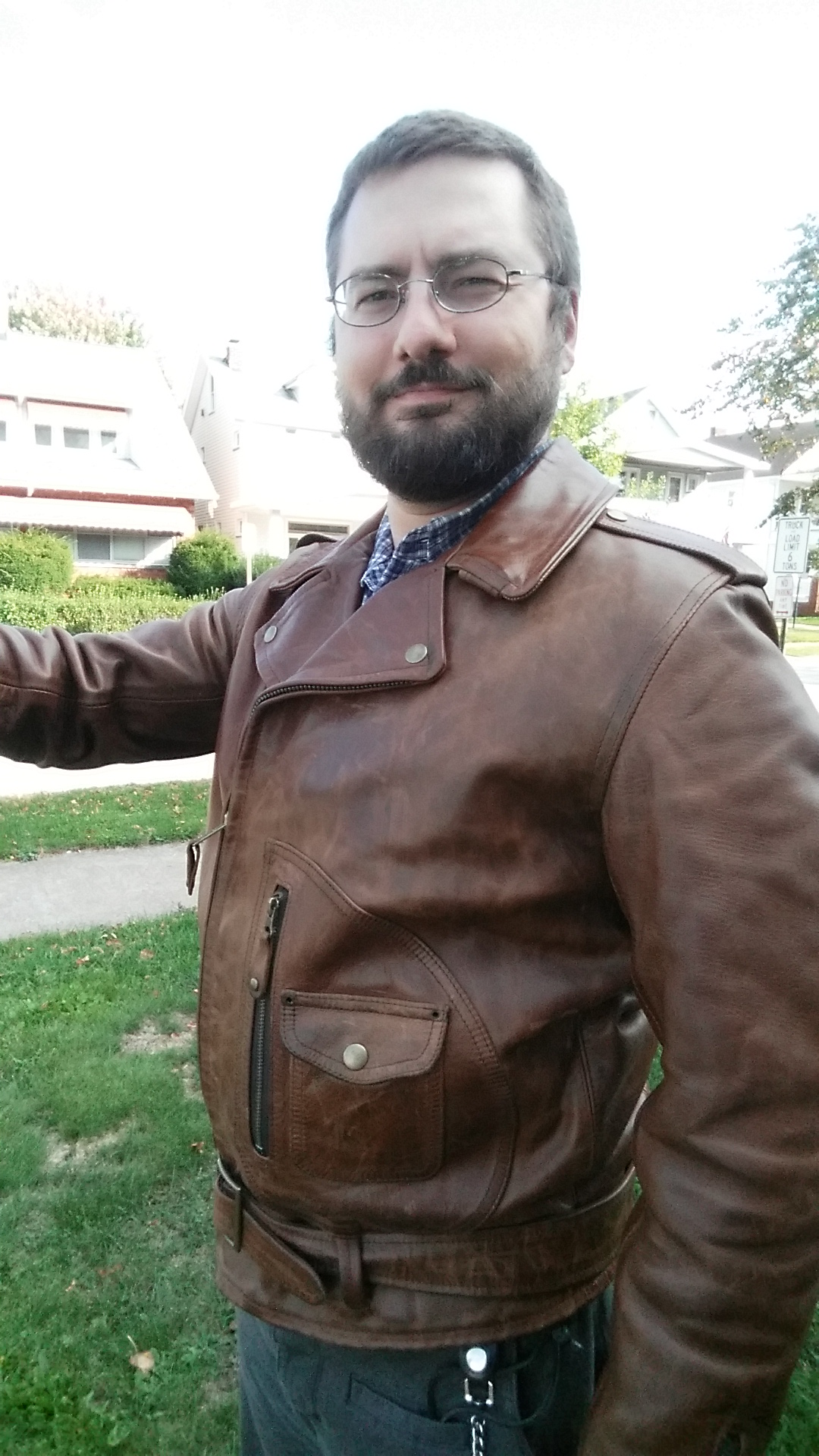 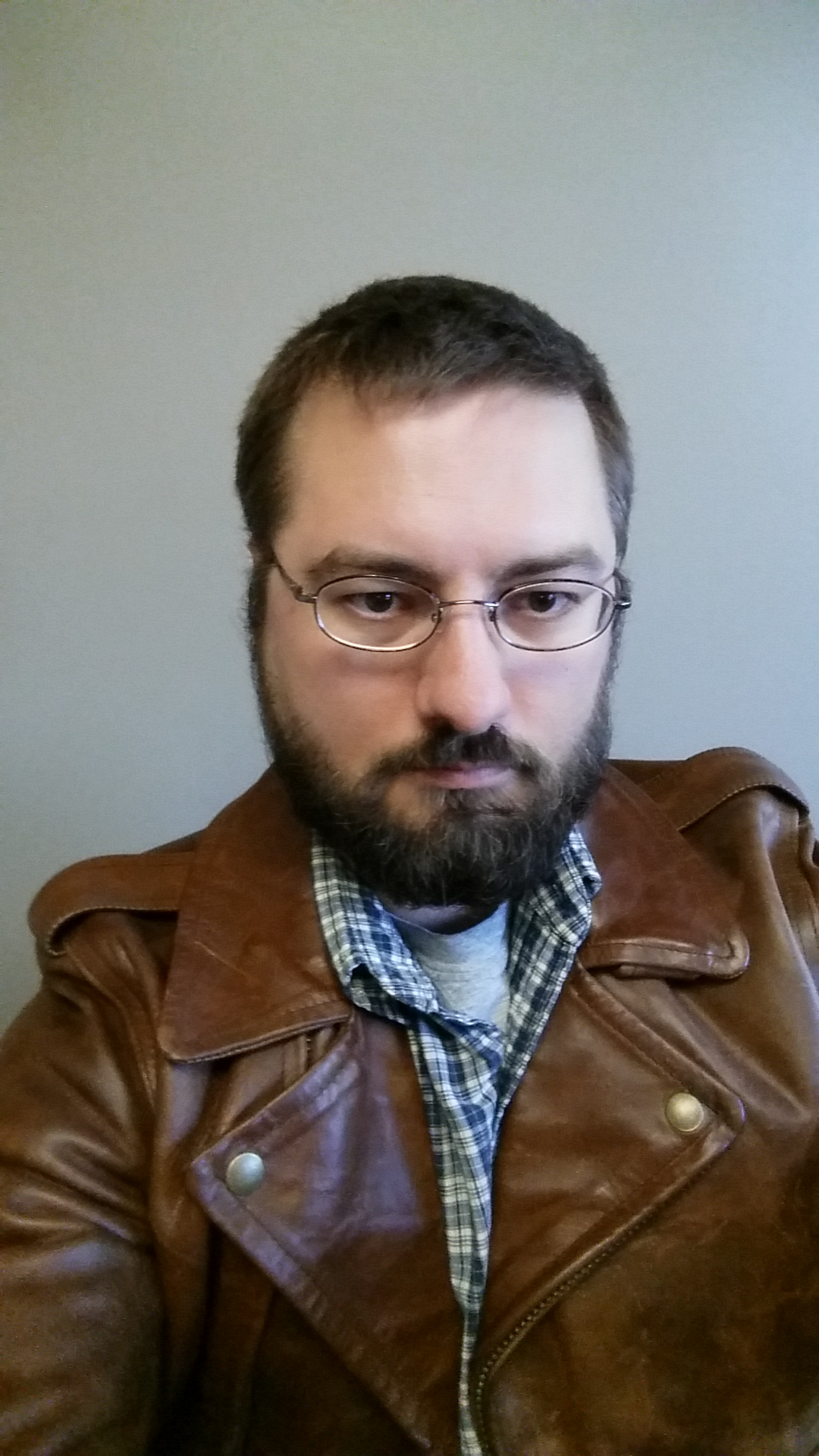 This thing fits me like a second skin! It's incredible. It's a slim fit and I fill it perfectly. Can't layer under this thing, at all, but it'll be perfect for warmer weather.

Sleeves are a perfect length for me, and the cuff zips on the top of the sleeves look right.

Despite the lack of an action back or shoulder gussets, I feel like I have very good range of motion and flexibility.

There are no handwarmer pockets on the jacket, right or left. That's something to get used to, I guess, but I don't really mind it. The jacket looks simpler and slimmer as a result, I think. There's no side adjusters of any kind, either. So it's a very simple, no frills style. I'm very fortunate that it fits me so perfectly.

There is one inside pocket, on the wearer's right side, opposite the D-pocket, which probably balances things out if you have stuff in both pockets.

The natural horween cxl horsehide is excellent. It's not super stiff, but feels, looks, and smells great.

Overall, couldn't be happier with this. Boy did I score big time when I picked this one up.
Last edited: Oct 18, 2016

Monitor said:
This is one I am deeply jealous of. End game type of jacket. One that takes care of the style for ever.
Click to expand...

Now that I have it in hand, I do believe you are right.

TREEMAN said:
Looks Great Guppy......It even made you smile a bit!!
Click to expand...

Hahaha! I only look mean.
T

How's the weight of that natural CXL? About like the Highwayman you picked up? I really dig the color. It absolutely makes the jacket so freek'n unique.

ton312 said:
How's the weight of that natural CXL? About like the Highwayman you picked up? I really dig the color. It absolutely makes the jacket so freek'n unique.
Click to expand...

It's very much like the horween I've seen in Aero jackets, which is to say very good. And yes, it feels about the same weight as my recent Highwayman acquisition. It's substantial, but I wouldn't call it heavy. I'd guess mid-weight, or maybe mid-heavy. My usual preference is for heavy or super heavy leather for moto jackets, like 1.5mm-1.8mm+.

But this is just fine, and I like it very, very much. I don't want anyone to misunderstand and think I have the slightest misgiving. It's awesome.

I think it's a better leather than what I've seen in most if not all Schott jackets that I've handled personally. I'm not usually a big fan of Schott leather -- a lot of their jackets that I've handled personally felt much too thin to me, despite what I've heard others say about it. But this one feels just right, and if they used it in all their jackets, I'd be happier.
Last edited: Oct 19, 2016
You must log in or register to reply here.
Share:
Facebook Twitter Reddit Pinterest Tumblr WhatsApp Email Share Link