belfastboy said:
I was watching a real life crime show on TV. The detective lamented that too many criminals were watching police procedural shows and learning to pick up their casings before fleeing the scene.
Click to expand...

True, yet most freak out &/or panic, or there isn't enough time. As they say, it's usually just the stupid ones that get caught.

Correus said:
True, yet most freak out &/or panic, or there isn't enough time. As they say, it's usually just the stupid ones that get caught.
Click to expand...

On the same show differenct episode....they cops caught a particularly stupid one.....the cop turned to the camera and said....."catching stupid is easy.....we don't usually catch the smart ones."

Correus said:
most modern shooters mess up if they intend to discharge a pistol during a crime, and speed is essential - casings. The ejected casings tend to lead to the apprehension of the person - revolvers on the other hand...
Click to expand...

belfastboy said:
I was watching a real life crime show on TV. The detective lamented that too many criminals were watching police procedural shows and learning to pick up their casings before fleeing the scene.
Click to expand...

We will be watching a film or tv show, the hitman is about to fire his semi-auto pistol, and I say to my daughters "so girls, what is the risk in this situation for the shooter"?

Just added this one to the herd. A Baikal Bounty Hunter 2 in 12 gauge. Gotta love those hammered SxS. 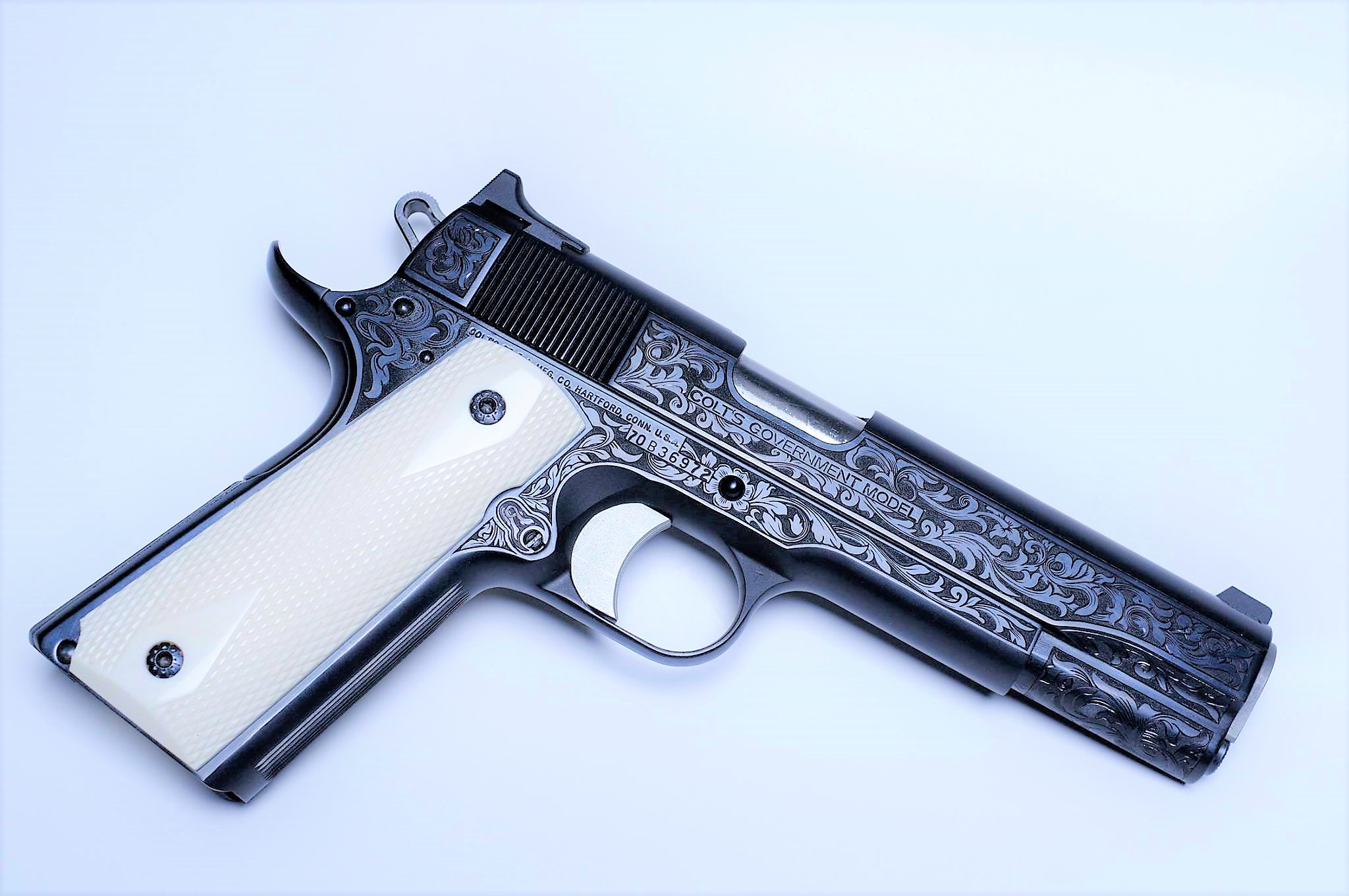 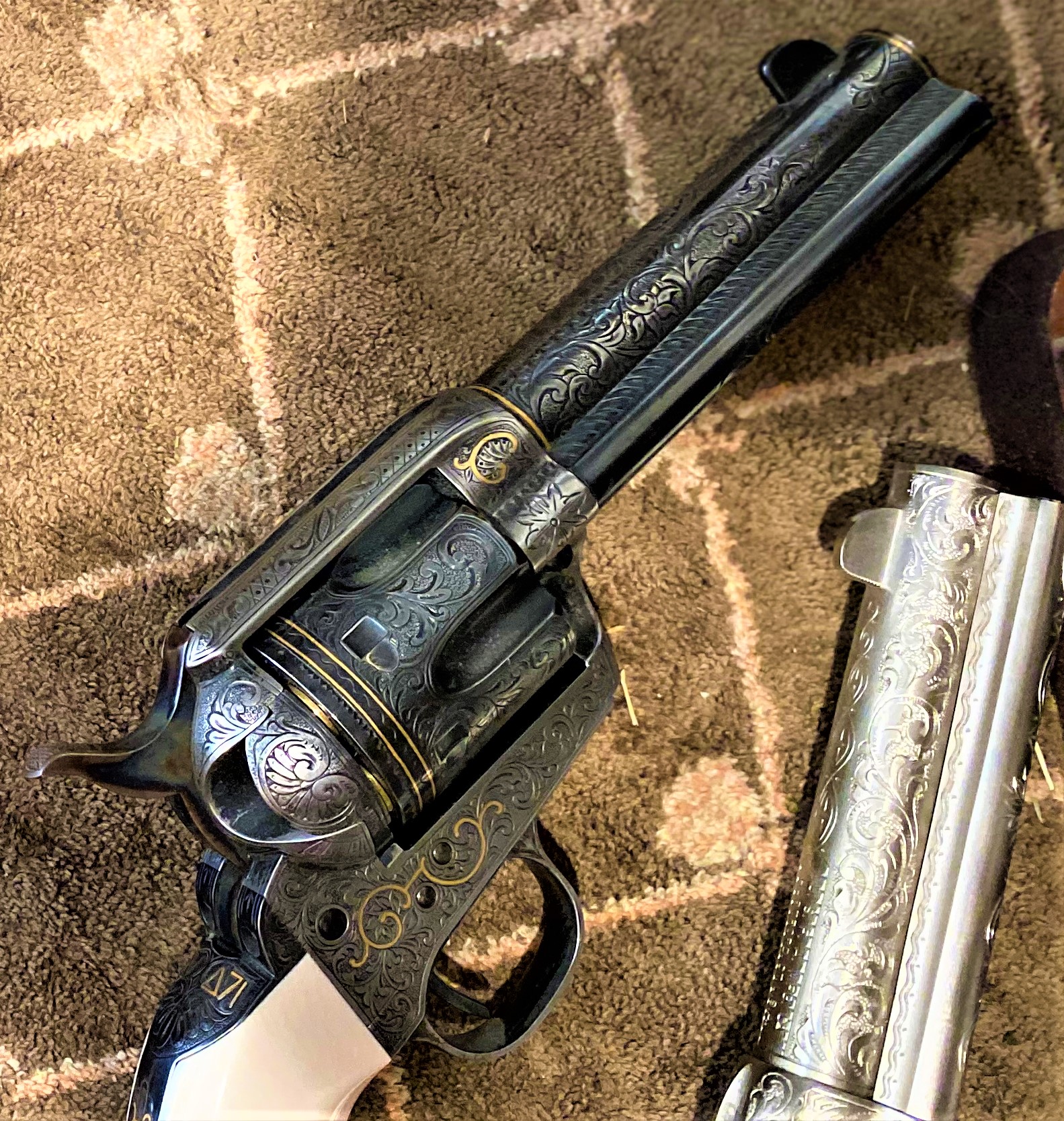 Bartender Edit: Please be reminded that the House has a strict 'no politics' rule.
Last edited by a moderator: Nov 29, 2020

Are those your engraved guns Yahoody? 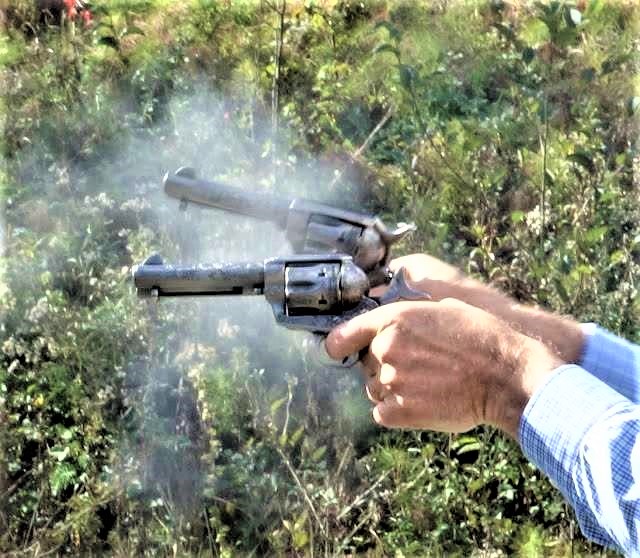 HoosierDaddy said:
Are those your engraved guns Yahoody?
Click to expand...

Are most of those Colts factory engraved? Very nice

Thanks. I have some that are. Most, intentionally, are not. I like some of Colt's engravers but not all. There are many exceptionally skilled master engravers who have worked for Colt that no longer do so. And most of the working Colt factory master engravers can be commissioned directly at 1/2 the price, or less, for the same work, as Colt charges. Caveat Emptor there. Direct commissions have also been much more timely on delivery as well, than the tiresome delays through Colt's Custom shop. If you haven't seen one the newest CCS price list is a sight to behold . 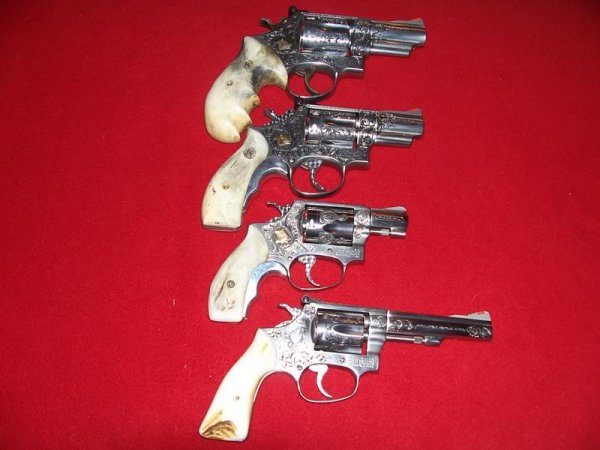 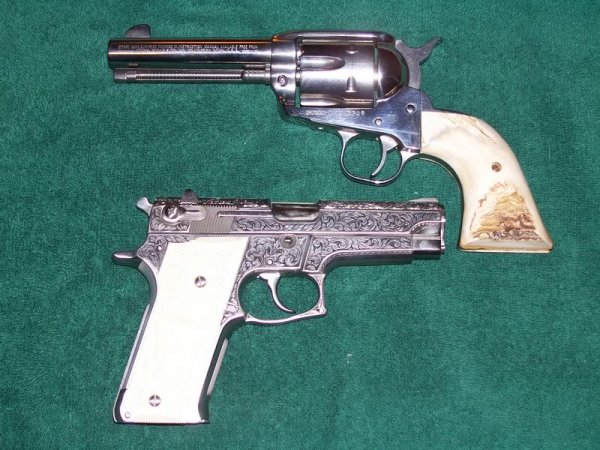 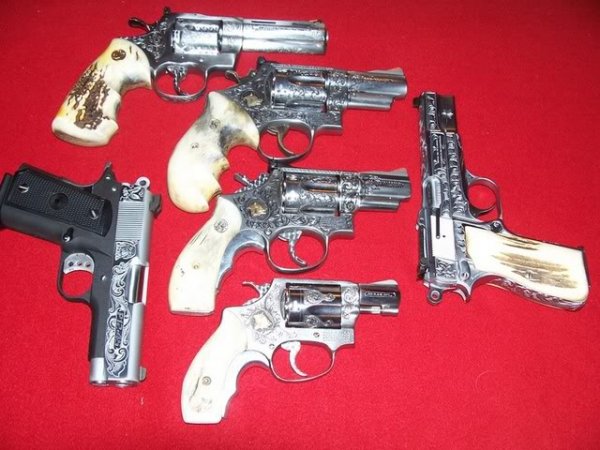 I may have posted this photo before but my Browning Hi Power is on the right and my usual Para Ordnance .45acp carry gun is on the left.

My colt Python is Factory engraved and they agreed to use my drawing of a Python for the opposite side of the Colt Horse engraving emblem behind the cylinder ( I'm an artist ) and frame them both in gold wire. I had a factory coupon discount for engraving and it was engraved in 1993 before prices skyrocketed. Engraving and gold wire inlay cost was $1082...Jeweled hammer, trigger and cylinder flutes were $40..action smoothed and tuned $45..Stag oversized finger grips with Colt groove grips with Colt emblems $160. I can't even image what it would cost to have that done now. It's one handgun that I would never sell.

The S&Ws were engrave by a local well known engraver ( Ben Shostle ) who at the time was head of The Engravers Guild. His engraving was sought after for being deep and a quite unique style. The Para Ordnance and Browning Hi Power was engraved by fairly local engraver with his own style of scroll.
HD
Last edited: Sep 24, 2020

Yikes! And my engraved guns are stainless except for my Para Ordnance and Browning Hi Power which are plated, There may even be an upcharge for engraving SS.

Those are truly...exquisite. Thanks for posting them.


Picking brass? If one was actually concerned you could easily buy several Glocks (because they are cheap and plentiful) of the same model, a few extra barrels, extra firing pins. It is easy to switch barrels, firing pins and slides on one frame between your drive by or antifa outing. Mix and match parts for the night out and not worry so much about the brass. Forensic matches the bullet to the barrel, the brass to the slide's breech face and firing pin. Mix them up and no match. No one ever said they were smart.
Click to expand...

Who built the 1911 for you? I see a few style elements there that I recognize from some friends down in AZ, but there are definitely others who could do that as well.

Picked up a little 20 Gauge Stoeger I found used and cheap! 26" barrels, sorry about thee boxes but we are moving from Illinois to Arkansas. 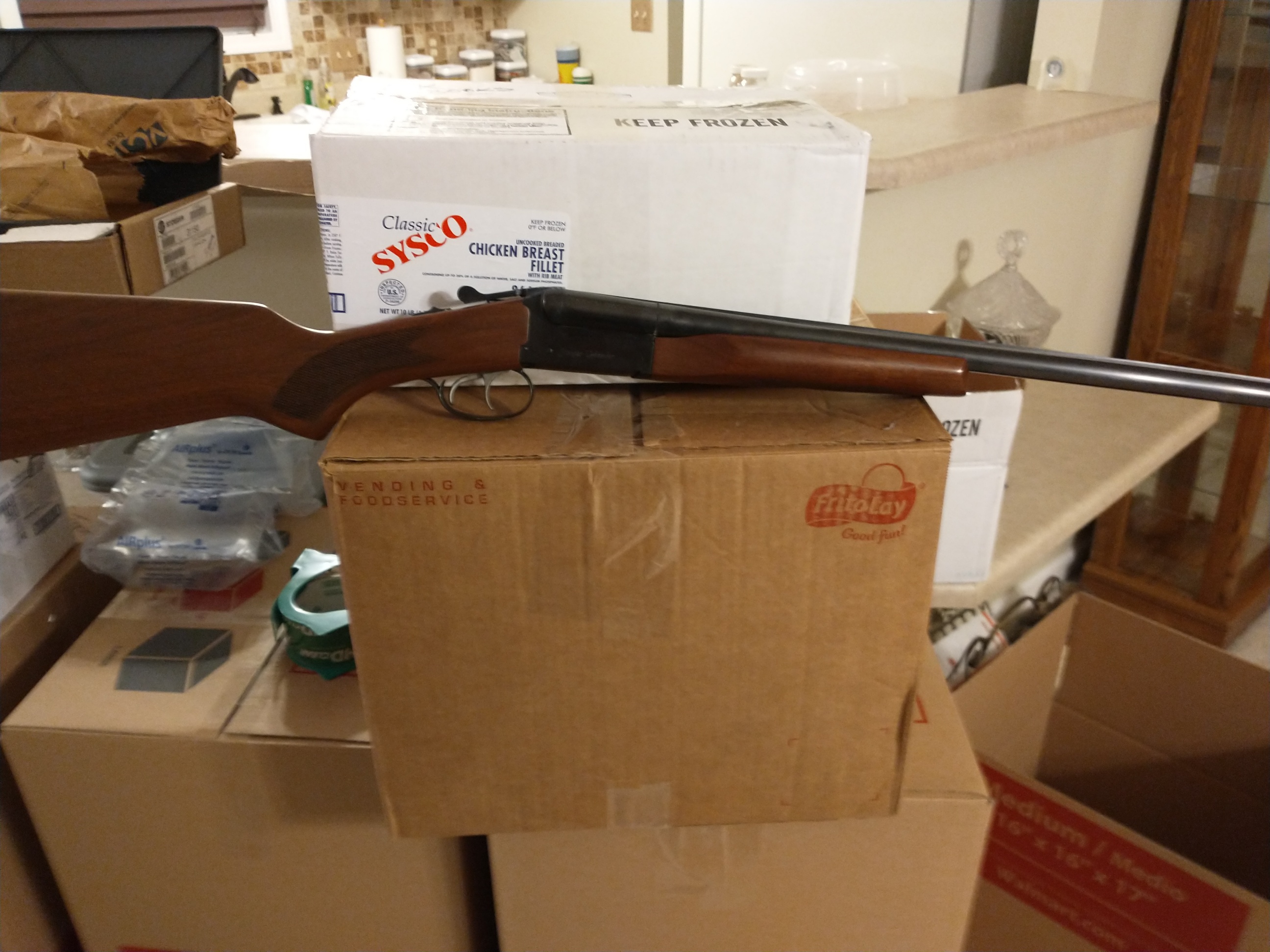 A "his and hers" pair with a couple stories behind them... a US M4 and a Canadian C8A3.

M4: This one started because, with my aspirations of academia and belief in hands-on learning, I wanted to have a modern counterpoint to pair with a Garand for "Then vs. Now" lessons. Many of the parts are Afghanistan bring-backs--a friend who was a Marine over there and didn't fully come home brought back as much of his issued M16A4 and M4 as he could, then found himself in a nasty divorce and needing funds so I bought the parts with a "right of first offer" on them or any rifle built from them when he got back on his feet. Sadly, this was not to be and he joined the two dozen vets a day who take their own lives... which makes this rifle a lesson in the human costs of war in addition to its other roles. The upper is not a bringback but IS a genuine Colt military-contract M4, shimmed up to legal length for a pin-and-weld by John Thomas at Retro Arms Works--he's kind of the guru of AR-family clone builders, if you need something and he can't make it it probably can't BE made. The thing on the stock is a USB flash drive for maintenance logs, mounted on a standard QD sling swivel via a Harbor Freight key-tag. (I do this for all my rifles; it's not so convenient for handguns.) Unique ID Tag on the right-side magwell by Carolina Laser Works, engraved with the correct manufacturer ID (CAGE code) and serial number for this specific receiver.

C8A3: My gal is Canadian by birth, so I thought instead of just his-and-hers M4's a C8A3 would be a nice nod to her heritage on a similar platform. Some of the parts on this were on Canadian Forces deployments to Afghanistan with friends up there and found their way to me through them, which adds a nod to our allies and their fallen. The Umbrella Corporation receiver is a uniquely personal touch for her, since she's a Resident Evil fan... I could have gone for a fake CF-engraved 80% blank lower, but the blank would have cost as much as the Umbrella and I would have had to machine it myself. At two hundred bucks ready to build from one of the tightest-tolerance shops around, or two hundred PLUS jigs and tools for amateur workmanship, I think that's a No Brainer. Since genuine Diemaco Green furniture is almost impossible to get in the US, we faked it with a coat of KG Gunkote Napa Green, and we had to cheat with an airsoft version of the buttpad and that weird forked rail our northern neighbors adopted instead of a proper rail system. The upper group is by BCM, 0.3" longer than CF Issue to stay Title I, though I'm thinking about having the barrel shoulder cut back 0.3" farther and screwing the flash-hider down accordingly. The optic is not a book-correct Elcan C79, but this EoTech 512 with laser-module addon setup is modeled after how one of my friends up there set up his own "work gun" over in the Rockpile.

Bayonets (not pictured): I have a correct OKC-3S for the M4, I've told her that she has to source her own Eickhorn B2005CAN for the C8 because I was raised that one does not gift cutlery except as an insult.

JustinW said:
I tend to prefer older firearms. I have a soft spot for the Browning Hi Power...
Click to expand...

I love those Browning Hi Powers...