Show us your TIES

I do enjoy my ties, and I've been having quite a string of good luck recently. I don't think it can last, and I don't know how many more my folks will allow in the house.

But you should see my piles of cast offs. For everything I post on here, there's a '70s polyester, a '60s skinny or a completely trashed golden era tie. I've got a box with well over 100 junk/ cast off ties.
M

Some beautiful ones don't get any bids at all: http://cgi.ebay.com/one-lot-of-6-me...ryZ14070QQssPageNameZWDVWQQrdZ1QQcmdZViewItem

...rrrgh. Need to finish my car and pay off my credit card. Must...delay...gratification...

I have that tie! But, it's dark blue with white dots... has the spider web detail on it too!

Location
The Center of the Universe

I've just bought a few new ties- is it just me or are the loops on the back sewn on flimsier than I remember when I wore ties in Catholic school? It seems like the tacking isn't strong enough and the self-fabric strip just sorta falls off after a few wearings. 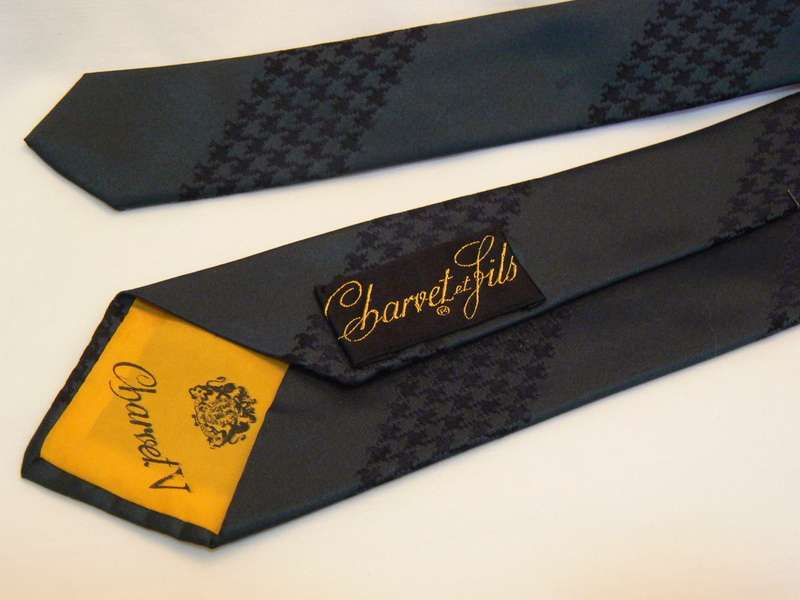 I found quite a few lately.

I'm not a big fan of thin ties but couldn't resist these:

Here's a wool one:

Unfortunately this one has a small hole:

A couple modern ones.

Gotta love the llama. Wool, made in Peru.

Got this one at Wal-Mart today. Very Art Deco-ish.

Is that a Vitaliano Pancaldi?
C

You can buy a modern tie with some deco-inspired design on it, that's made in Indonesia and made of some form of Polyester, and I'll tell ya, those can be spotted a mile away,....but if you go with a real vintage tie, if indeed that's the look you're trying to achieve, than you'll be spot-on and look 100 times better and its quality will be much, much better also! Fact is, if you're trying to go 30's or 40s in your syle and dont wear an authentic 40s necktie, you're just lazy and/or stupid,...doh,....if you look you'll find they can be had for as much and many times cheaper than any modern necktie,..ya just cant go wromg brother!!

I had been a friend at one time to Rosanne Ettinger who has authored many books on vintage clothing, jewlery and men's ties....(in fact several of my vintage ties appear in the book, "20th Century Neckties: Pre-1955.")

I'll have to take some photos of some of the ties,....I've since given away a few to a close friend for Christmas and birthday, who has a western swing band "Ace Brown and His Ohio Valley Boys".

"By heck, if its around your neck, keep 'em wide and keen, and always clean!"

Found 3 more ties at my friendly local thrift shop. A buck each.
2 Arcos and a Grayco. There's another grayco in this thread as well, the '20s? black polka dot one with the metal tie clip built in.

You did very well!
E

I've been thrifting and I find a lot of 60s skinny ties. How do you go about identifying the older 30s and 40s ties? They seem to be shaped the same as modern ties, but maybe different patterns. I can't tell if a tie is old or if it's just newer vintage-styled.

30s/40s ties are a good bit shorter than 70s ties.
They taper much more towards the knot area.
90% of them are some combination of reds, blues, or browns, with a lot of the dark blues faded to a purpley-black.

Point stitching and/or cool labels. No loops on the back. Short. Small knot.

1930s/40s ties are also made out of silk a lot. They are also more flexible and not as thick as modern ties.

And, of course, they can often have some wild designs that are rarely if ever seen on ties today.
Like these vintage ones:

Though art deco, this tie is much more subtle than the ones above it. Plus, it's not silk, not very flexible and the material is thick.

Also- See how the skinny end of the new one just goes straight and the old ones flare out?
C

A few hundred smaples of my vintage necktie collection,...nothing past the late 1940s,..well maybe a few from the early 50s. I just thought some fellows and gals would enjoy seeing the designs, etc. There's a LOT of hsitory here,...as I was able to learn where some came from. Several from a neighbor's father,....we found them in his attic,....that and a LOT of clothing,...sadly the clothing was almost ALL dry rotted!!!:eusa_doh:

This is inside back of the NRA one from the 1930s,....I hope to find more of these,..some to wear would be cool,...to reproduce would be nice also!

Show Us Your Loop Collar Shirts!

Show Us Your Sewing Patterns

C
At What Point Does it Become Costume?
2 3

Show us your Terylene/Dacron ties!
2