Show us your vehicles

I hope this thread isn't a repeat.
Do you drive/ride a classic car, truck, chopper, bicycle, hot dog cart, n'such?

Here is me atop my first car, a 1963 Ford Galaxie. Notice the attractive primer with rust trim paint job. I wanted a 1942 Army surplus jeep like my brother had, but couldn't find one.

Not as classic as I'd like, but it'll do for now.

I'm a pedestrian, and unless I become extremely wealthy, I'll have it no other way. I'm not much for paying $50 to fill a gas tank then several hundred in repairs, insurance, etc.. and then there are payments.

But please, I'd love to see some more classic cars! I hope someone has a Caddy to share...

My car is just a 2001 Toyota Camry, which is about as nondescript as a car can be although it is plenty reliable and easy on gas.

My vintage ride is my bicycle, a sweet 1950s Schwinn that used to my dads until he gave it to me.
G

My 2005 Vespa PX-150. 4 speed manual transmission. Looks vintage but without all the hassle. Top speed around 55 mph and I get about 60 mpg driving around NY (tank holds 2.1 gallons) so pretty much fill-up once a week or so for $4.00. Gotta watch the cabs and the Jersey drivers but nothing beats it for around town.

Neat.. Do you have to register that thing?

All you need now is Audrey Hepburn hanging off the back of that thing!
G

Mr_Misanthropy said:
Neat.. Do you have to register that thing?
Click to expand...

Thanks. But yeah, anything over 49cc's you have to register and have a motorcycle license. Mine is 150cc's. You can always tell how powerful Vespas are because the number in their name is how many cc's the engine is.

I didn't know that! Thank you for educating me! And that is a most stylish ride, i'm slightly jealous. :cheers1:
E

GateXC said:
Gotta watch the cabs and the Jersey drivers.....
Click to expand...

GateXC - I really like the Vespa - very retro - very practical for slipping in and out of New York traffic. I've been considering putting a couple of the four stroke versions on my boat, so the crew will have something to use for errands when we dock. They're relatively lightweight and can be craned aboard with the dinghy davits.

For a night out on the town, and to collect my boat guests from the airport, I bought a Golden Anniversary 1952 Cadillac Fleetwood Imperial limousine (Model 7533X) with coachwork by Derham.

The car was built for Nelson Rockefeller at a time when buying a limousine was truly a custom experience. After selecting a model from the Cadillac showroom, the unfinished rolling stock (frame and engine) would be shipped to a Coachbuilder for sheetmetal exterior and custom interior. For this car, Mr. Rockefeller specified what may have been one of the world's first car phones: an FM radio transceiver was installed in the trunk so that Mr. Rockefeller could talk with his Manhattan offices while motoring the streets of New York. Originally, the car was delivered with a tan leather top to limit summer heating of the black limousine. The leather has been replaced with a textured weatherproof fabic similar to what is used in convertible tops.

I knew that I would never be willing to leave the car unattended in a parking lot, and never be willing to turn the car over to a valet. The best alternative was a chauffeur to babysit the car while I was in the restaurant / bar /theater. I found a responsible college kid, vetted his driving record, and had him fitted with a traditional chauffeur's tunic, jodhpurs, and riding boots.

Finding a chauffeur was a bit more difficult than I had imagined. Mid-century limousines were always hand-made, and the front chauffeur's compartment was custom fitted to the original chauffeur. The driver was sent to the manufacturing plant, where the front chauffeur's bench was fitted and adjusted to the driver, then welded in place. If you later fired your chauffeur, you had to find another driver of the same height (or you had to buy a new car - great job security for the chauffeur). I had to find a driver who could fit comfortably into the unadjustable driver's seat. Limousines of this era were designed with two distinct interior treatments. The front chauffeur's compartment was covered in black tuck-and-roll calfskin with a matching black calfskin headliner. The rear compartment was upholstered in heavy woven wool brocade. Leather was not considered a luxury seating material - only rich woven fabrics were suitable for the behinds of the wealthy. The rich and famous sat on wool and silk - the driver sat on cow.

I'm not the only member of my family to admire the handsome lines and bulletproof craftsmanship of 1950s era Cadillacs.

My great-aunt bought a new Cadillac Coupe DeVille (1950 or 1951) and drove the car daily until her death 40 years later. She was widely recognized in her small Southern town as a tuft of blue hair just visible above the massive steering wheel. She was a seemstress and dressmaker, and made most of her own clothes to match the two tone color scheme of her Cadillac.

My grandfather always drove Cadillacs - always black and always new. Here's a photo of him with my mother in 1952 -

Cadillac - Standard of the World.

Thanks for the Caddy fix! All beautiful automobiles. I saw that limo on your other post about your yacht, it's a real gem. I don't blame you for not wanting to leave it in the wrong hands, or worse, unattended in a parking lot.

Here is me atop my first car, a 1963 Ford Galaxie. Notice the attractive primer with rust trim paint job. I wanted a 1942 Army surplus jeep like my brother had, but couldn't find one.

Vladimir Berkov said:
All you need now is Audrey Hepburn hanging off the back of that thing!
Click to expand...

It is a fantastic chick magnet though so I don't have that much trouble finding a replacement for Audrey.

Location
Back in Long Beach, Ca. At last!

Our daily car is a silver Hyundai Sonata, that I always lose it in parking lots because it looks like everything else. This is our 1955 Packard Clipper. It's all original. The body's good, but there are a couple dings we need to fix, and it's down with a stuck lifter right now.

This isn't mine, but mine is just like it: http://www.dennis-williams.com/Images/Motorcycles/BMW in Mondocino.JPG

I am currently looking for a car, and am planning to go this afternoon to see a (Drum Roll, please) 1963 Galaxie 500! I want to get a dog, and can't expect the dog to ride around in a saddlebag, so I have to get a car. (The dog, by the way, will be a beagle, and his name will most likely be Django.)

Location
City of the Angels 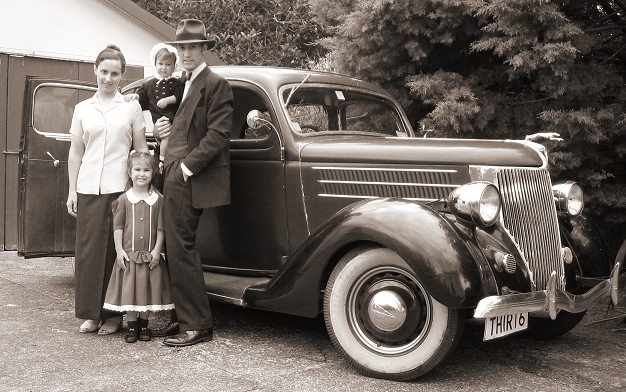 And here she is getting push-started by the groomsmen at a wedding: 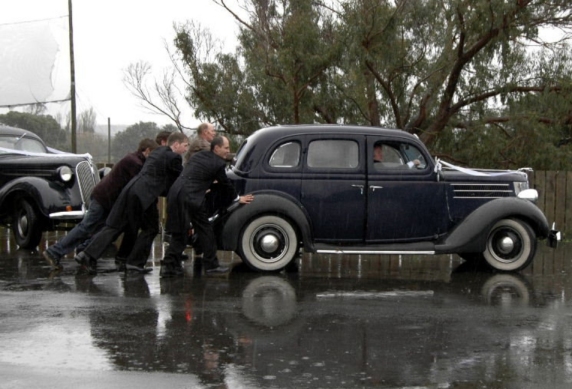 I have a bicycle that is relatively new but based on an old one. It's a Bianchi Cafe Cruiser, and I don't ride it enough. It is a seafoam green in color with red handle bars and a red seat that has a built in 3 speed light! I get a lot of funny looks, and Wizard of Oz comments when I ride it around town.
Otherwise you can see me in my 2002 volvo, hey it's a turbo, and very reliable and safe. But most of the time I'm being carted around by Hemingway Jones in his Grand Cherokee.
It's sad that I don't have a classic car yet. My Grandfather re-built them for a living, and my dad is a collector as well. One day it is my dream to own a Gullwing.
You must log in or register to reply here.
Share:
Facebook Twitter Reddit Pinterest Tumblr WhatsApp Email Share Link