Pol Pot (1925-1998) and his communist Khmer Rouge movement led Cambodia from 1975 to 1979. During that time, about 1.5 million Cambodians out of a total population of 7 to 8 million died of starvation, execution, disease or overwork. Some estimates place the death toll even higher.
In 1971, General Idi Amin overthrew the elected government of Milton Obote and declared himself president of Uganda, launching a ruthless eight-year regime in which an estimated 300,000 civilians were massacred.
In 1033, following their conquest of the city from the Maghrawa tribe, the forces of Tamim, chief of the Zenata Berber Banu Ifran tribe, perpetrated a massacre of the Jews in Fez. The city of Fez in Morocco had been contested between the Zenata Berber tribes for the previous half century, in the aftermath of the fall of the Idrisid Dynasty.https://en.wikipedia.org/wiki/Idrisid_dynasty
Tamim's forces killed over six thousand Jews, appropriated their belongings, and captured the Jewish women of the city.
I pose these questions, how many deaths are considered too many?
And, how many deaths will it take to realize there is no honor in slaughter no matter who is the more righteous?


“There have been persistent rumours for over 200 years that Napoleon's defeated Grande Armée made off with 80 tonnes of gold and other valuables that his soldiers had looted in Moscow, and buried it en route back to France when the going got too tough. No trace of it has ever been found, but Philippe de Ségur, a member of Napoleon's staff, said the treasure was dumped in Lake Semlevo in Smolensk Region. The site appeared credible, as the French army abandoned large amounts of arms and ammunition nearby. Various Russian officials, archaeologists and treasure-hunters have searched the lake since the 1830s, to no avail. But other historians think General de Ségur's account was an attempt to divert attention from the treasure's real resting place…”

Blackjack said:
What I meant was no one would care if you wore a hat with a Russian symbol on it.
Click to expand...

Where?! in my country you would not go 100m on the street
watch the; that's what Russian fans want to do.And quick reaction

Blackjack said:
from it's mistakes instead of hiding under a bed every time someone holds up an SS uniform.
Click to expand...


Blackjack said:
yet no one has mentioned the Japanese.
Click to expand...

Where? Nobody died in my country from the hand Japs. It simply


Blackjack said:
History is history and I for one am not in the least bit afraid of it or worried about looking at or owning a swastika,
Click to expand...

it only testifies to you, Here in my country is a proverb ; know the story you, understand the present
....Spain ,Austria , Swiss , France, Slovakia, Italy, Romania, Russia Chroatia , Seribia ...it collaborators with nazi
Only Poland in Europe was not an ally and it is true It explains a lot why someone has other approach to your " problem"... damn, in my country then time 39y-60 does not flow as like in the show Allo Allo. ,every meter of earth is bathed in blood.
ps
I do not think about collectors here,reconstructive groups. ect... Only I'm skipping blind fans and enthusiasts a totalitarian system and of their insignia
Here,in my Country all nazi and comunist insignia they wake only bad memories, emotions and bad associations
I have question ; Have you ever been in person in Aushwitz? GERMAN NAZI CAMP (Oświęcim ) or Treblinka ?.
I'm afraid not yet, just like other people ; shoulds see it with their own eyes, before asking the question ;...

Blackjack said:
Im curious why everyone here seems so repulsed by anything to do with Nazi's
Click to expand...

New developments, told in a rather breathless style:

Although the story of the gold is interesting enough, I find the tale of the SS Officer’s long secret diary more so.

This “fortune in loot hidden in South-west Poland” story seems to be, at minimum, a persistent folk myth in that part of the world. And there is apparently a small group of people who take it seriously and make it a hobby or a passion to persist in hunting for clues. Is the diary genuine? No idea. Hopefully we will learn more in due time.

Some loot has actually been found in Poland. Not the huge amount of gold that is the stuff of legend, but a chest of silver nonetheless. One would think that there are probably more of these small loot burials around, whether hidden by victims or perpetrators.

Of course, the real interest of the find is not the “treasure” itself. It’s that the find whispers of an unknowable story of war and loss and long vanished individuals. Just glancing at the photograph, a full blown complex plot for a novel suggests itself. What were the tragic circumstances? Who were the doomed players? We will never know.
Last edited: Jun 18, 2020

Could it be that they are getting close to finding the fabled lost “Amber Room”?

Disclaimer: Of course, about every ten years someone thinks that they have tracked it down, only to be wrong. Nonetheless, the back-story in this case sounds plausible. Maybe.

Another group of treasure hunters thinks that they may have pinned-down the location of the missing Nazi gold... One thing is for sure, that is certainly a creepy old mansion with a dark history. Hollywood could not have dreamed up a more perfect location.

^^^Nostradamus has a quatrain that I chanced across in college; years later Scott Pelley and 60 Minutes
featured account of a Nazi gold drop-a lake in eastern Europe. I have always equated the latter tale with
Nostradamus' quatrain. Plausible. And Nostradamus mentioned Hitler by name in his Prophecies.
The gold passage is a separate quatrain entry. Fascinating.

Here we go again. They think they may have found one of the treasure troves…. Why not wait to publish the story until AFTER they open the thing? 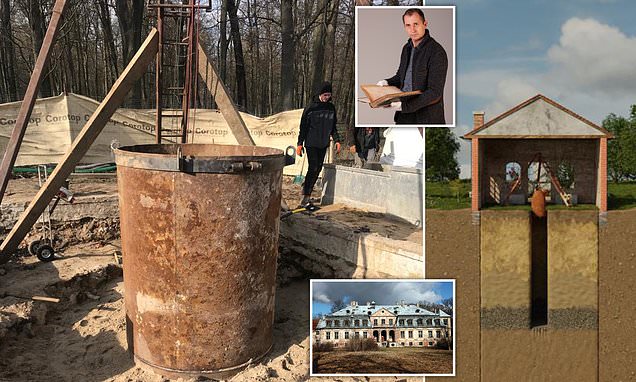 EXCLUSIVE: The discovery was made using a geo radar search of an abandoned conservatory at an 18th century palace in the village of Minkowskie in southern Poland.

„Denn man Hals- und Bein-“ as we say over here.

Especially we Thuringians laugh about all the crap since thirty years!
And especially all we folks in the "hobby historians-scene" know exactly, that the whole topic is DEAD since the late 90s (!). There was never anything new.
Last edited: May 15, 2022

And it’s not even early summer…

This video Was released on July 30th 2022. At about minute 3 they show documentation that they have been given permission to proceed with the dig. At about minute 4, they go out to the site, which looks interesting. At about minute 6 they announce that the actual digging will start September 1st. They also call for donations and also for volunteers who want to help with the dig. (Perfect job for Agents of F.L.A.S.K!). Towards the end of the video, they start talking about some stuff that I can’t quite follow.*

Anyway, mark your calendar. Raiders of the Lost Loot starts on September 1.

Latest twist: the famous SS Diary, which started the latest Polish treasure hunting frenzy, has been judged to be a FAKE.

Here is the quote from the above article than links the Masons to the diary:

"According to the Silesian Bridge Foundation, they received the diary from a man claiming to be the son of a SS officer and represented a Masonic Lodge made up of the descendants of Nazi officials seeking atonement."
F

Treasure seekers here found a pot of Viking gold with bits and bobs. Site overlooked the sea.
Wherever soldiers camped or garrisoned there lie chance find. While on NATO xcer Germany
twenty yrs past a pvt soldier under my command took a metal detector out to nearby wood all excited.
He told tale of some Yank squaddies having taken diamonds, gold from Nazis and buried but never got.
Lads bought the farm probably.

As every Lounger knows, “X” never marks the spot.

^ My pvt had given a fairly decent brief, made a proper job of it. Plausible tale and a good thriller.
I do believe his tale that somewhere buried in Germany is a captured cache Nazi gold and diamonds.
You must log in or register to reply here.

N
The Flat Head for Posterity
2