To patch or not to patch

I acquired an original A2 jacket some time ago, managed also to trace down the original owner and researched his past - a pilot with 15th fighter squadron in Panama. Took it a little further and got in touch with his remaining family in the states, a truly fantastic story - and it’s still worn (with great care) regularly in a Piper Cub. Here’s the conundrum, I’d like to add a patch to my Eastman replica and after racking my brains for some time thought it might be nice to apply his squadron colours to my Eastman. I’ve spent all tonight painting up a leather patch but before sewing it on, wondered what you fine folks thought?

Here’s a photo of an original - and the one I painted up tonight placed on my Eastman...

What's not to like, highhope?! Beautiful work! Really, very nice indeed!
If it was me, I'd "age" it with a bit of tea just to tone it down a shade and advance the natural ageing process, but other than that, it's great! Thanks for posting!

I say go for it. It'd obviously make you happy. The patch is super nice!

I have a GW repro patched and an original M422 patched as well as a number of other original A-2's and G-1's that don't have patches. I find the patched jackets never get worn. Patches are really cool but they can make the jacket look a bit like a costume vs. a jacket one can simply wear. My 2 cents

Patched jackets, I consider them to be
an homage to our heroes of yesteryear.

Patched don’t do it for me,,I think they make a jacket unwearable for someone my age,,I won’t be allowed out the house in one,,
D

I have this on my Avirex A2. WW2 patch from a USAAF squadron " The Crusaders".

I like it but it was on the jacket when I bought it. ( Not for even close to Eastman prices I must say !)

They operated over Europe out of RAF Wendling

It's your jacket and your choice . Nice patch you have by the way ! 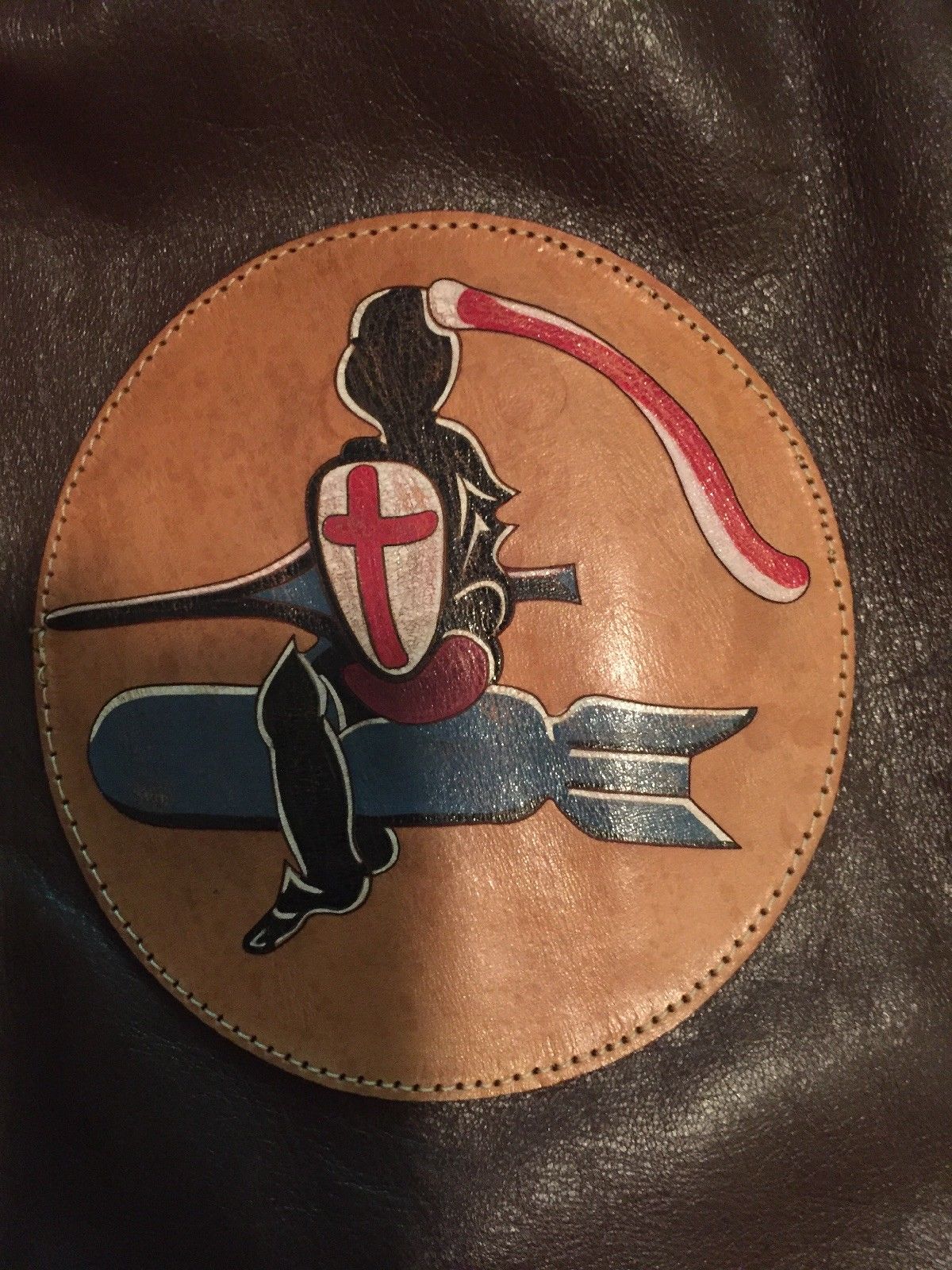 Nice job on the paint work. I’d vote that since you already have a patched jacket leave this one alone. I think they look cool but agree with the sentiment that it’s a bit costumey.

I can see the "costume" argument - my girlfriend cites it from time-to-time with me.
But really, it all depends on what you pair the jacket with. A patched USAAF jacket with a plain ball cap and jeans isn't "costumey" to me. Not at all. I think it's a nice remembrance to an individual or the generation where all gave some and some gave all, and gave us the freedom we all enjoy/take for granted today. And a patched jacket can be so cool as the patches and jacket art can look amazing if done well as it has a certain class and quality of that 40s era, which predates fashion and was all just style.
But pair it with the wrong/patched cap or a pair of chinos and a tan shirt, and, well, one can expect flak from the girlfriend and general mockery. Fair do's.
But then again, I sometimes take the underground in the city and witness what everyone else is wearing and am frequently agog. So who cares? If it makes you feel good in a crazy, modern world that seems to have lost its marbles (and sense of history), wear what you like. I have never regretted patching my Aero ANJ-3 and it easily gets the most compliments from strangers of all my jackets (mostly ELC) and I think much of that has to do with the patches and jacket art. The fact that it's a superb design and so well made helps too!
Last edited: Jul 31, 2019

I’d do it. I don’t think it’s too costumey, unless you’re wearing military dress and boots throughout.

Nice artwork, but it’s a no from me too.

Stand By said:
But then again, I sometimes take the underground in the city and witness what everyone else is wearing and am frequently agog. So who cares?
Click to expand...

Exactly. Wear what you want the way it makes you happy. People literally physically become who (or what) they want to be nowadays, what's a couple of leather patches compared to that.

Monitor said:
Exactly. Wear what you want the way it makes you happy. People literally physically become who (or what) they want to be nowadays, what's a couple of leather patches compared to that.
Click to expand...

great painting on the patch, but since you already have a similar jacket with that patch why would you want to have a clone of it?
H

Thanks for your comments - I guess it’s just different tastes.

I wasn’t very clear on my first post but the original jacket I have doesn’t have any patches on - only the name of the chap who owned it - Fred Handley Porter (and who’s history and family I traced when I acquired the jacket). I found a photo of the patch associated with his unit on the internet so I decided to have a go at painting a copy of it for my Eastman A2...I just figured it’s nice to put a little touch of remembrance to Fred when me and my friend do our early Saturday morning flights - not really for show, just a personal tip of the hat I suppose to a chap who’s past fascinates me - and who’s own A2, is now in my care.

Anyway, thanks for the comments all - much appreciated!

Did his family not want to acquire the jacket from you?
H

casterfield said:
Did his family not want to acquire the jacket from you?
Click to expand...

Sadly only distant relatives now remain as he had no children. Those that remain never knew him, they knew nothing of his past or even that he served in the army air forces during the war. To be honest, I had expected to part with his jacket once I’d got in touch with them - but they didn’t seem particularly interested beyond filling in the blanks in their family tree and thanking me for my research - it’s not everyone’s cup of tea I guess, one man’s treasure and all that...

I’m only a custodian, it’s still very much his jacket - I just care for it.

If it were me, I’d have moved absolute mountains to reunite!

Thanks for responding. That’s a lovely story and I think it’s amazing that you’re honoring his memory with the patch!

I'd go for it myself. As a rule, I do find plain jackets more 'flexible'. That said, I have in my time owned two A2s, both seal - one ELC horse, one Aero goat. The ELC had only the AAF roundel transfer; the Aero had that plus a 'Lucky Sevens' painted leather patch. The Aero got worn vastly more often, the the point where I decided just to sell the ELC. Just a nicer jacket all round (and I also realised I preferred how the goat looked of the two). I don't personally find one of these patches alone costumey - it's not like you're going for one of those Top Gun jackets, or an AVG tribute with extensive patching and artwork front and back. As I understand it, this would make it one of the more common 'decorated A2' styles that appeared during the war (the vast majority were left plain), at least until the AAF started discouraging any form of jacket decoration after Goebbel's propaganda shots of the 'Murder Inc' boys. I don't believe that a patch like the one you have painted so beautifully is out of place or necessarily costumey looking in a day and age where logos and prints on everything are now so common. As other have noted, in any case, why care what the herd think?
H

Thanks for your comments everyone - I took the plunge in the end had to re-do the patch though as the paint didn't adhere to leather finish on my first attempt. Spent a night with a piece of sandpaper, some humbrol paints and the tongue out - and much happier with the result. No flaking or cracking at all, the thinner paint soaked properly into the leather. I know patches aren't everyone's cup of tea but there's a personal story behind this one and I'd hope that Freddie - without kids - would be happy that 50 years after his death and 77 years after he bailed out of his Airacobra over Chame Point in Panama, there's some 35 year old who's keeping his memory alive