I'm looking for a cap. The style is an old one. If I knew the name I could find a picture to illustrate, sorry, a description is the best I can do.

Imagine a cap with a barrel-shaped crown and a brim like a baseball cap. Where a baseball cap's crown is composed of triangular panels with the bases sewn at the sweatband and the points sewn together at the top, the hat I'm trying to identify has a crown with a cylindrical shape and a circular panel closing the top. It was a style seen on factory workers in the late 19th century.

Thanks for your attention.
W

This doesn't quite look right, but I think I see where you're going. 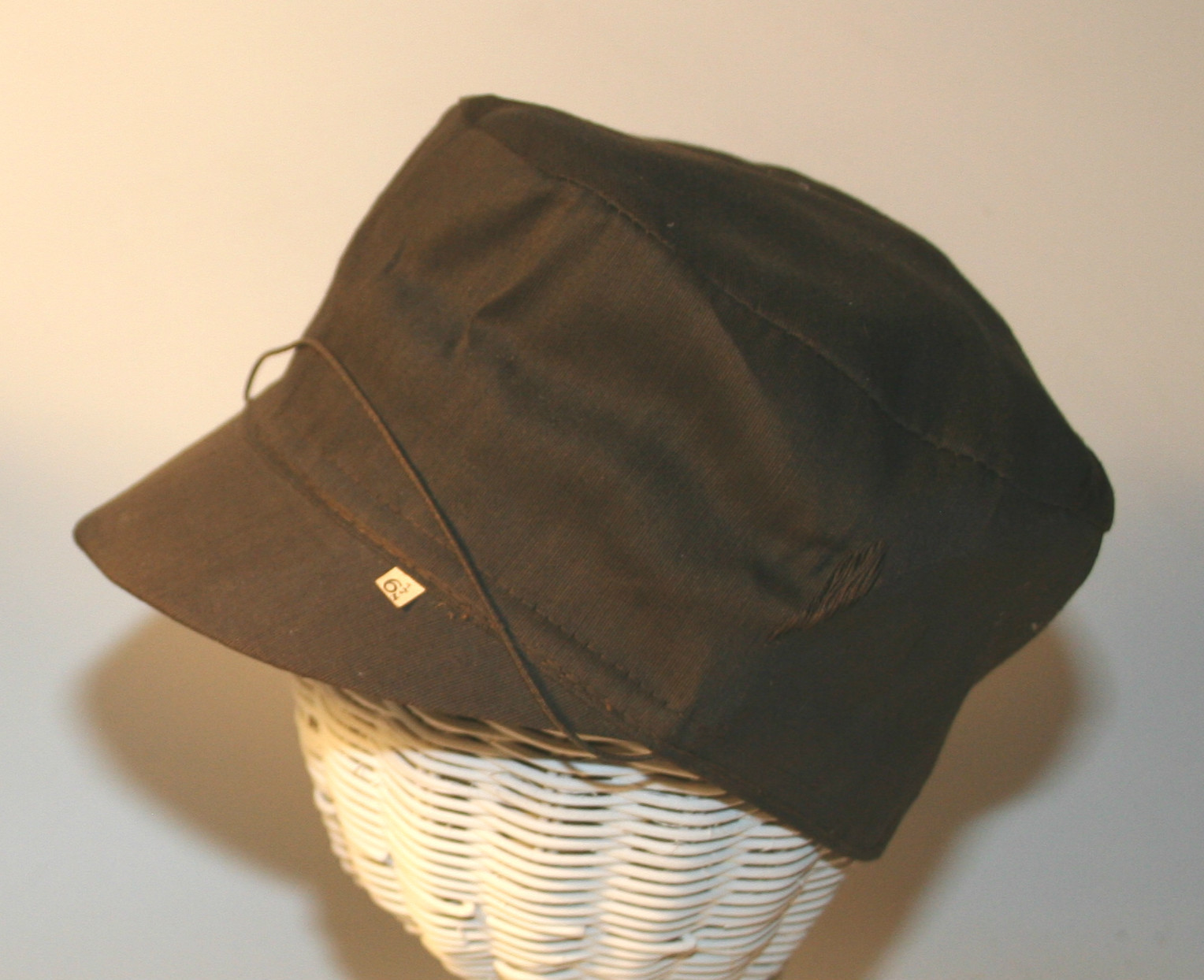 and sort of the top left, without the pom.

Thanks, all. "Painter's cap" is close, but the shape I had in mind has a taller crown, but like a painter's cap, has straight sides. The two fellows in the center have well-worn caps like what I had in mind. It dawned on me that I had this picture from my grandmother's estate showing a group of men and boys, no doubt workers at the business pictured, and that there may be one or more similar caps in it. The full image shows perhaps 40 men and boys posing along the front of the building.

The 1900 census showed my grandmother's father was a blacksmith's helper. The scene pictured here looks like one in my home town. The company, Ingall's Iron Works, was still operating in the late 1960's. It is located on the same street where the census showed my grandmother living with her father, mother, and sisters in the census records of 1900.
Last edited: Feb 2, 2013

I was thinking it was an early version of a welder's cap....
D

http://idealcapco.com/French-Seam-Box-Cap.html Kinda what you are looking for, but, not quite.
D

Maybe this is closer? http://idealcapco.com/EBCH006.html By the way-I have no idea whether Ideal Cap Co. makes a quality cap.

Yes, Doug, the 19th Century baseball cap is the thing. It's hard to imagine that someone sat down one afternoon thinking, "This baseball thing is really taking off. I ought to invent a new style of cap for the players to wear!"

I wonder where it originated? It looks like an adaptation of the caps worn by Civil War soldiers, whose ancestor was the French "kepi" from the 1830's.

Actually, what you are describing sounds a lot like the US Army patrol cap.

You can find "civilian" versions in a variety of colors on ebay.

The Army finally got smart and did away with that dorky beret, and replaced it with the patrol cap. Good move, IMHO!

Cool photo. The dude's hat on the right has a KILLER brim. :thumb:

Grizzly Adams said:
The Army finally got smart and did away with that dorky beret, and replaced it with the patrol cap. Good move, IMHO!
Click to expand...

Amen! I work in the Pentagon's suburb, and I see a lot of uniformed persons. I will be glad to see the last of that black beret. It's OK if you're French or Basque, but not on a US military uniform.

Alive'n'Amplified said:
Cool photo. The dude's hat on the right has a KILLER brim. :thumb:
Click to expand...

Yeah. I originally selected only the three on the left, but when I noticed the derby with the tilted brim, I had to expand the selection to the right, especially for this audience.

I'm pulling the trigger on a gray french seam cap tomorrow from Ideal Cap. I'll report when I get my hands on it.

So...does it meet your expectations? Gotta say, that cap looks pretty great in the pic.

DougC said:
So...does it meet your expectations? ...
Click to expand...

It's well made, of a light-weight wool. The sewing is very good, with close-spaced stitches and straight, even seams. The sweatband is 1-inch leather. The underside of the bill is dark green. While I would have liked a heavier-weight fabric, it is, after all, based on a cap worn in high summer in the mid-Atlantic states (we are famous for our hot and humid summers), and it is what I expected. At first I thought that $50 was a lot to pay for it, but I recently saw some mass-produced, off-shore, synthetic "ball caps" with team logos stitched on offered at $25. Considering that this is of natural materials and from a low-volume, domestic maker, I rethought my opinion.