What are your most inspirational, memorable, or just favorite movie quotes; new or old?

Old Lodge Skins [played by Chief Dan George]: "Come out and fight! It is a good day to die! Thank You for making me a Human Being! Thank You for helpin' me to become a warrior! Thank You for my victories, and for my defeats! Thank You for my vision, and the blindness in which I saw further! You make all things and direct them in their ways, O Grandfather. And now You have decided the Human Beings will soon walk a road that leads nowhere. I am gonna die now, unless death wants to fight. And I ask You for the last time to grant me my old power to make things happen. Take care of my son here. See that he doesn't go crazy." - "Little Big Man" (1970)

Walsh: "Forget it, Jake. It's Chinatown."

Marion: "You're not the man I knew ten years ago."
Indiana: "It's not the years, honey, it's the mileage."

-Raiders of the Lost Ark


Vivian: You go too far, Marlowe.
Marlowe: Those are harsh words to throw at a man, especially when he's walking out of your bedroom.

Philip Marlowe: "My, my, my! Such a lot of guns around town and so few brains! You know, you're the second guy I've met today that seems to think a gat in the hand means the world by the tail."

Philip Marlowe: "Get up angel, you look like a Pekingese."

Location
California, where you live for money and die for a

"Money. You know what that is, the stuff you never have enough of. Little green things with George Washington's picture that men slave for, commit crimes for, die for. It's the stuff that has caused more trouble in the world than anything else we ever invented, simply because there's too little of it."
-Detour

"Do you look down on all women or just the ones you know?"
"I was pretty nice to you."
"No, not to me. But you were pretty nice."
-In a Lonely Place

"Who'd you think I was anyway? The guy that walks into a good looking dame's front parlor and says: 'Good afternoon, I sell accident insurance on husbands; you got one that's been around too long? One you'd like to turn into a little hard cash?'"
-Double Indemnity

"I don't go to church; kneeling bags my nylons."
-Ace in the Hole

"Victims? Don't be melodramatic. Look down there. Tell me, would you really feel any pity if one of those dots stopped moving forever? If I offered you twenty thousand pounds for every dot that stopped, would you really, old man, tell me to keep my money, or would you calculate how many dots you could afford to spare? Free of income tax, old man. Free of income tax--the only way you can save money nowadays."
-The Third Man

"How much time has he got?"
"He's behind schedule now."
-The Killers

"There's too many of them. I can't kill the world."
-Night of the Hunter

Knew there had to be thread like this I was overlooking. Thanks.

Michael:
"I will always love you. That is the only truth that remains. Life is neither right nor wrong, good or bad. But I love you. That's all I know."

Probably one of the most powerful movies I've ever seen in the theater.

A League of Their Own:

Doogan: Well, I hurt my knee
Harvey: You fell outta a hotel window!
Doogan: There was a fire!
Harvey: Which you started, which I had to pay for.
Doogan: And I was going to send you a thank you note Mr. Harvey, but the hospital staff wouldn't let me have anything sharp to write with.

The life of Brian:

Queen Carlotta: [giving one of her nude guards a spanking] This will teach you to arouse royalty! 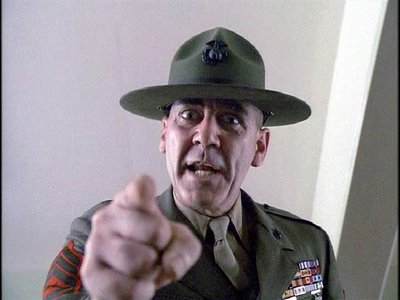 Newman and other passengers of the stagecoach are barricaded at the top of a hill from Richard Boone and other bandits. The wife of one of the passengers, held hostage by Boone, is at the foot of the hill. Boone leaves his cover at hill's bottom to negotiate ransom (obtaining a fortune embezzled by wife's husband from his bank). At the conclusion of the negotiations, during which Newman has been silent, . . .

Newman: Hey, I got a question. How you gonna get back down that hill?

After a running battle with Mexican revolutionaries where Cooper saved Lancaster's life, . . .

Lancaster: You saved my bacon back there. If you hadn't, you'd've stood to be a whole lot richer.

Cooper: Maybe I wasn't thinking of that.

Lancaster: Too bad you didn't know Ace Hannah. Shot my old man in a stud poker game when I was just a kid. Ace felt so bad, he give me a home. Ace used to say three things: Never trust anybody you don't have to trust; never do any favors you don't have to do; and never take any chances you don't have to take. . . . Ace lived long enough to know he was right. He lived 30 seconds after I shot him.
*****
From "The Professionals," starring Burt Lancaster and Lee Marvin.

Robert Ryan: (rhetorically) What were Americans doing in a Mexican revolution, anyway?

Lancaster: Maybe there's only one revolution, . . . from the beginning - the good guys against the bad guys. Question is: Who are the good guys?

'Nobody ever loved me that much.' -- 'Rick', Casablanca

What makes that a great line is that it conveys so much in the context of the scene. (And that I can relate to it has nothing to do with it!)

I use that one a lot.

That one always makes me crack up.

Chas - brilliant clip from Full Metal Jacket! Brings back fond memories - I became a fan of Mr. Ermey because of that speech! lol

One of my faves from National Lampoon's Christmas Vacation, I used to play regularily when my old boss came to mind...quoted this once to a co-worker, they almost cried they laughed so hard


Chevy at his best!

Location
L.A., where all waiters are aspiring thespians.

Insurance Agent, speaking to John Rolfe, accused of being part of a bank heist:

Rolfe: Try buying a cup of coffee with 'em.

You will have to do it yourself, Emma - Joan Crawford to Mercedes McCambridge in Johnny Guitar
You are something for the birds, Rosa & The only one who does anybody a favor in this town is the undertaker because he takes them out - Beyond the Forest
M

Dirty Harry: I know what you're thinking. "Did he fire six shots or only five?" Well, to tell you the truth, in all this excitement I kind of lost track myself. But being as this is a .44 Magnum, the most powerful handgun in the world, and would blow your head clean off, you've got to ask yourself one question: Do I feel lucky? Well, do ya, punk?

Tombstone...The last part of the end narration by Robert Mitchum...

Johnny Tyler: Is something on your mind?

Wyatt Earp: Just want to let you know you're sittin' in my chair.

Johnny Tyler: Is that a fact ?

Wyatt Earp: Yeah, it's a fact.

Johnny Tyler: Well, for a man who don't go heeled you run your mouth kinda reckless, don't you ?

Wyatt Earp: No need to go heeled to get the bulge on a tub like you.

Johnny Tyler: Is that a fact ?

Wyatt Earp: Damn right, you're scared. I can see that in your eyes.

[Wyatt walks up to Johnny as Johnny reaches for his gun.]

Wyatt Earp: Go ahead. Go ahead, skin it. Skin that smoke wagon and see what happens.

[Johnny doesn't do anything and Wyatt slaps him in the face again.]

[Wyatt slaps Johnny harder and when Johnny turns to look at Wyatt his mouth is bleeding.]

Wyatt Earp: You gonna do somethin' or just stand there and bleed ?

[Johnny still doesn't do anything.]

Out of context it doesn't sound like much...but in the beginning of Samuel Fuller's The Steel Helmet, "Sgt. Zack" (Gene Evans) is having a conversation with a Lieutenant (who has considerably less combat experience than he does) about how they're going to go about getting their patrol back to safety. The Lieutenant explains his strategy. Sgt. Zack counters with his. The Lieutenant asks Zack to justify himself and the latter retorts,

"Look. I just want to come out of this thing, ok?"

It becomes Sgt. Zack's refrain for the rest of the movie. Here in type, it looks a little weak. But when Gene Evans delivers it...it's the ultimate tough guy line.

Location
L.A., where all waiters are aspiring thespians.

^^Yeah, the Steel Helmet is quite a good film, and features something unique for a war moive of that time: an integrated squad. Probably the best film that Lippert ever produced...

Widebrim said:
^^Yeah, the Steel Helmet is quite a good film, and features something unique for a war moive of that time: an integrated squad. Probably the best film that Lippert ever produced...
Click to expand...


Sam Fuller was definitely not afraid to confront race in his movies. Compare the way he utilizes African American characters in movies like "The Steel Helmet" (1951) and China Gate (starring Nat "King" Cole) with other films shot in the same era (or even later). Definitely ahead of his time.
You must log in or register to reply here.
Share:
Facebook Twitter Reddit Pinterest Tumblr WhatsApp Email Share Link