I’ve been reading so many TFL threads over the past several weeks that I feel I almost know some of you. I've learned a lot about buying leather jackets. I own no leather jackets now, I’ve never owned a good one, and I haven’t owned a motorcycle for many years. I favor worn-in vintage over new outerwear and love the fabulous old jackets many of you post photos of, but based on what I read here I decided to start by buying a new Aero through Carrie. Apart from the usual TFL reasons for a beginner to do so, I’m a golfer who loves quirky old links and the UK, and I recently (pre-pandemic) took my first trip to Scotland and had a blast, so I’m happy to support good Scottish businesses. And as a former clothing retailer I was impressed by what many of you were saying about Carrie so I'm happy to support Thurston Bros.

Carrie took the initial information I gave her, suggested the Premier Highwayman and Vicenza, and sent me a fit jacket. Now, having tried on that one and a second fit jacket, I think I'm too big in the upper body for a 44 Premier Highwayman -- I’m 6’2” 180 and I want to be able to wear more than a tee shirt underneath -- and fit pretty well into a size 40 Highwayman, although it's boxy of course. Also I know that I like the look and feel of FQHH better than Vicenza, at least based on those two fit jackets. I am a bit concerned about how long it will take to break in the FQHH so I'm thinking about ordering a standard Highwayman in tumbled brown. Maybe with zip sleeves added, or the Zip Sleeve Highwayman, because I think zip sleeves look cool.

I trust Carrie on fit based on what you folks say, but in hopes of getting additional expert feedback I've pasted in below some fit jacket photos, in case anyone is willing to comment. On top are photos of the standard Highwayman in Brown FQHH (taken in a huge rush unfortunately), followed by the Premier Highwayman in Dark Seal Vincenza. What do you think about how they fit me?

I wish I could look like those of you who have the bodies (and in some cases beards) to look fabulous in everything -- like ton312, MrProper (I stumbled on his Instagram and I definitely don’t look like that with my shirt off), technovox (after the Premier fit jacket didn’t seem perfect I suggested to Carrie that maybe I should get the technovox Sheene - Highwayman hybrid, and she gently told me that I’m not built like technovox and that "Fellows with an average athletic build won't fill out the shoulders on the Sheene unless they choose to wear the jacket very tight"), Marc mndt, and others too numerous to mention.

Final comment -- based on my history with clothing and my desire to avoid divorce, I think that I will end up with no more than a couple of good leather jackets, first this upcoming Aero, which I'm already financially committed to by going through the fit jacket process, and probably a really nice vintage one bought from one of you. I will wear them and eventually pass them on to my sons, who both are about my size and can wear my clothes.

Unfortunately I can't see the pics...they appear as broken jpeg's:

Rookie mistake of some sort. I will try to fix.
L 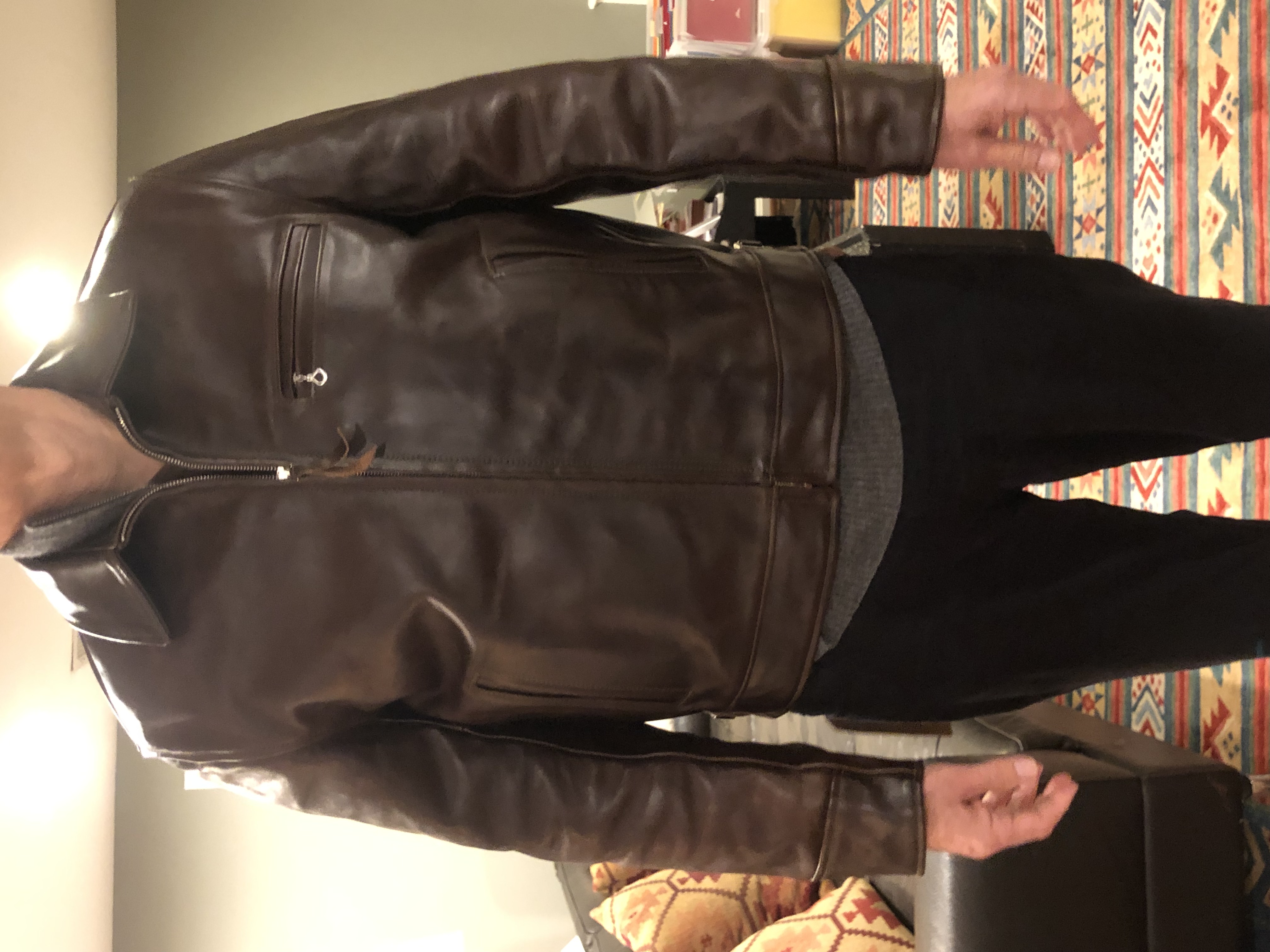 Sorry for the duplicates. Still trying to figure this out. 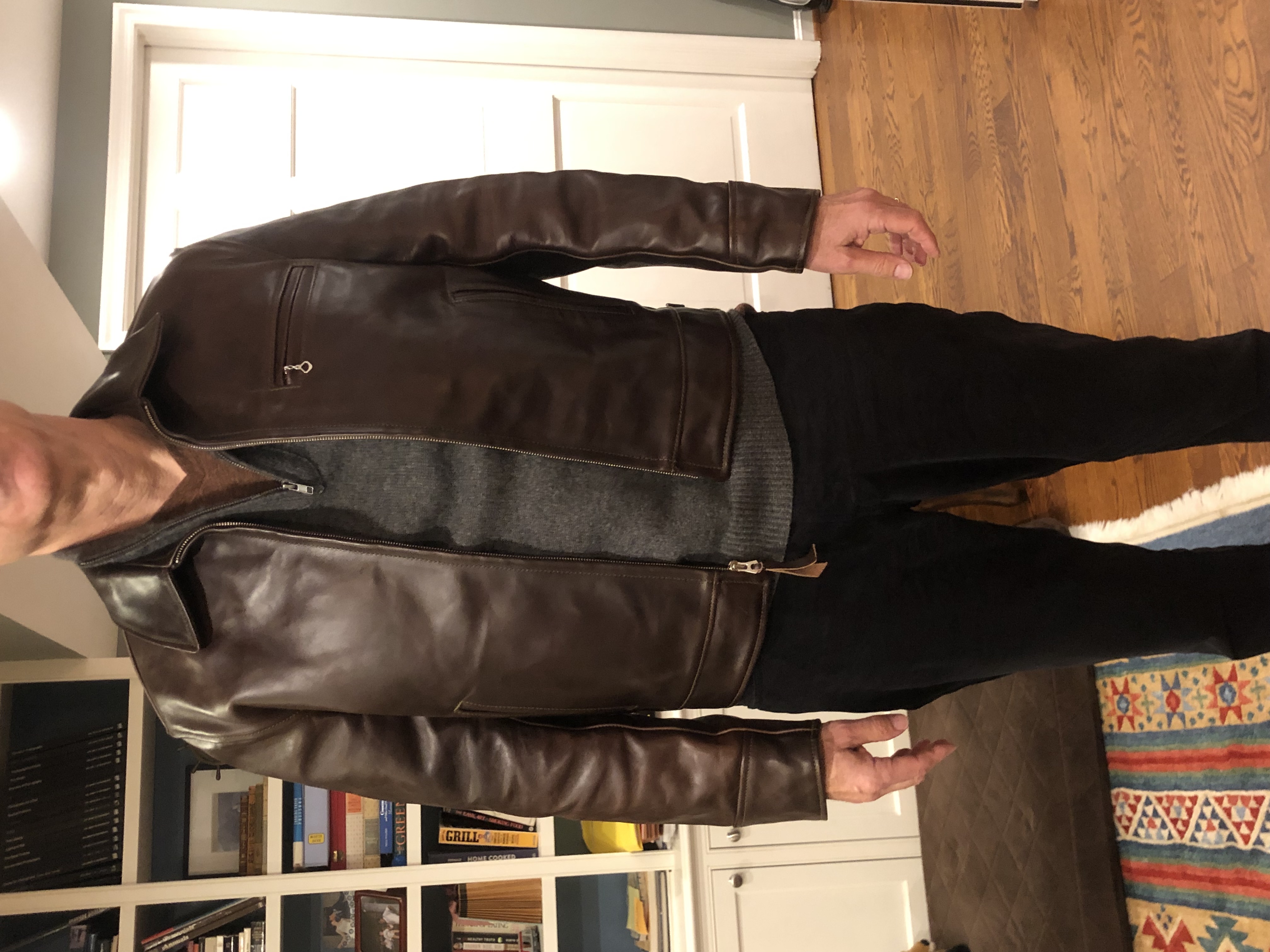 Back of FQHH Highwayman I hope. 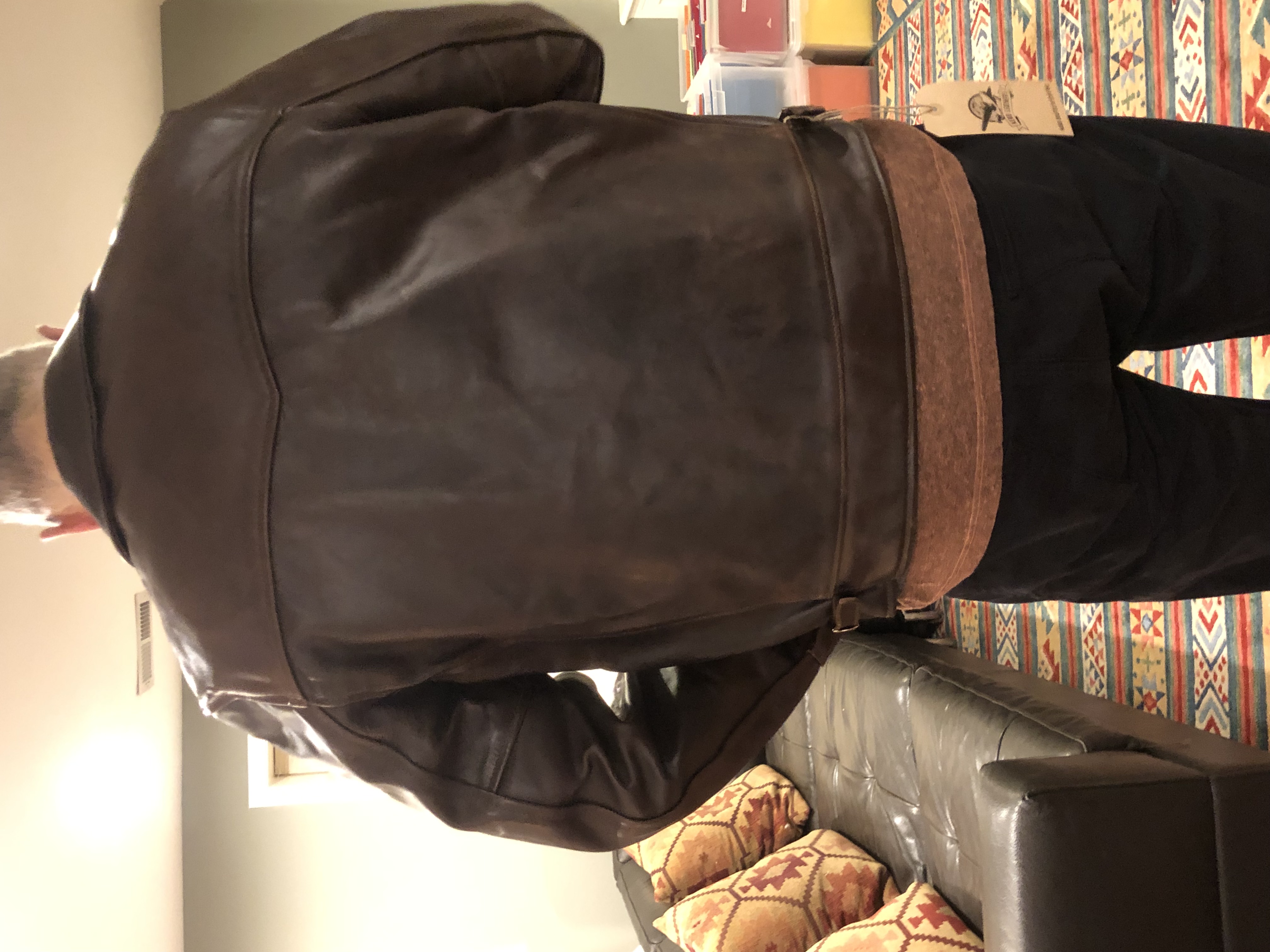 Looks great! As it breaks in and softens the drape will help it relax through the body!
L

For me, getting a fit comment from Ton312 is like getting batting advice from [insert your favorite Cubs or White Sox hitter].

LAW7 said:
For me, getting a fit comment from Ton312 is like getting batting advice from [insert your favorite Cubs or White Sox hitter].
Click to expand...

LOL, I appreciate the compliment. Both jackets look great. You've got a nice trim fit in the PHWM and a perfect winter weight, layering piece with the standard. Well done sir!

It needs some wearing to break in the leather, so get on it.

So, if you like the brown FQHH "40" Highwayman - just tell Carrie I'm all in on this one and send the Vicenza one back, and enjoy the break-in. It looks great to me...

I understand Aero has a shortage of Horween FQHH presently, so you may save yourself a lot of time & headache that way, and by mid-winter have a well-broken in Highwayman!

I think the front looks ok, but the back shows sign of the jacket being too big.
IMO once the back folds on itself like it does in your pic the jacket is too large. Especially considering you are already wearing a jumper underneath it.

Edit: i mean it doesn't look bad, but that's a fit i would tolerate for a used jacket i got for a good deal. If i was paying new price i would want a better fitting jacket. 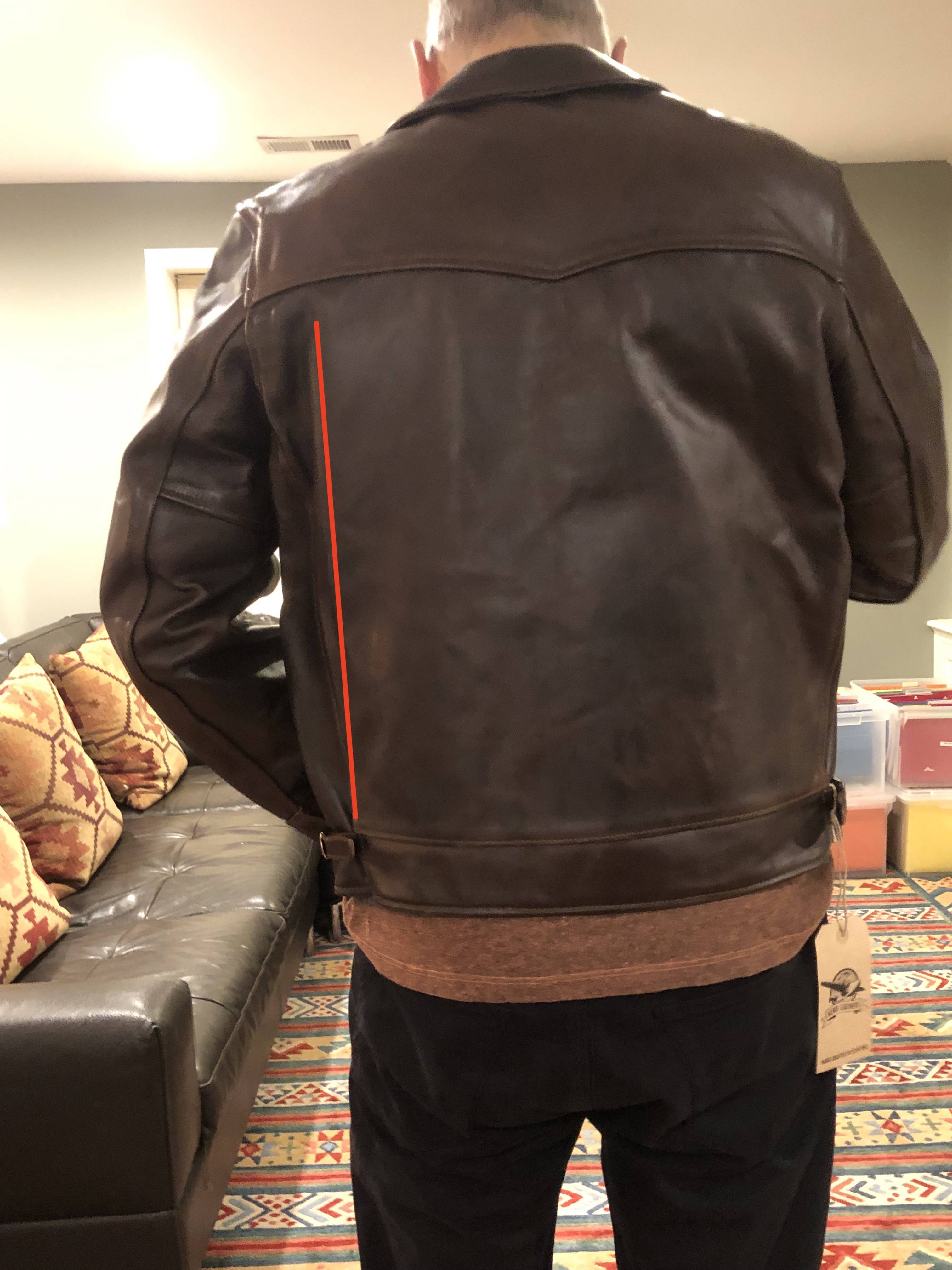 Thanks guys. I was definitely considering keeping this Horween 40 standard. And more so now that I’m getting positive reinforcement on the fit.
L

LAW7 said:
Thanks guys. I was definitely considering keeping this Horween 40 standard. And more so now that I’m getting positive reinforcement on the fit.
Click to expand...

Wrote that last one before Carlos840 jumped in. Carlos840, I know your fit preferences - as I said, I read a lot of TFL threads - I know you like them close-fitting. And I agree with you on this point.

LAW7 said:
Wrote that last one before Carlos840 jumped in. Carlos840, I know your fit preferences - as I said, I read a lot of TFL threads - I know you like them close-fitting. And I agree with you on this point.
Click to expand...

Don't get me wrong, it doesn't look bad, but IMO it doesn't look great either.
I would be happy with that fit if that was a used jacket i got for a great deal, if i was paying full new price i would want a better fitting jacket than that.

I would also think that the jacket is a tad too wide. Even though the HWM is rather boxy, I would prefer less boxy. But also likes it rather tight.
L

Yes, MrProper and Carlos840, maybe I don't want my jackets as tight as you two, and more important perhaps I am not super fit and v-shaped like both of you, but I agree that the back of the 40 HWM could be better. Carrie was in between sending me a 38 and a 40. I chose the 40 fit jacket and it seems to fit well everywhere but the back, although I also am cinching in the bottom just about all the way in the photos.

In Carlos840's "My leather jacket database" post from 2018 I do see some minor back folding on some of the jackets, but none of them has this much extra material/boxiness in back.

I will of course talk with Carrie about this. She must have the most experience with this, apart maybe from someone at Aero.

Has anyone out there tried to get Aero to make an adjustment to reduce some of the wideness in the back of the Highwayman? Any success? Any other specific suggestions about how to deal with this one issue?

Do whatever @Mrfrown did. Best fitting Highwayman I’ve seen.
L

Mrfrown can correct me if I'm wrong but I think his much-admired Highwayman is a Premier. I posted photos above in this thread of me in a Premier 44 fit jacket in Vicenza. I found it too tight on top even with just a tee shirt on, and it looked very tubular I thought, perhaps because of the cut or perhaps because I have larger than a 33 inch waist these days.
You must log in or register to reply here.
Share:
Facebook Twitter Reddit Pinterest Tumblr WhatsApp Email Share Link