I just bought a pair of Red Wing Heritage 2936 Lineman boots of The Clymb for $163. They have several moc toe styles on sale for ~47% off and I rarely see Red Wing Heritage on sale. Actually thinking about ordering the Wabasha 9186 style because the price is so reasonable. Anyone own a pair and can comment on what they think of them?

Shameless plug - use my invite here and if you order a pair I get a $25 credit - http://www.theclymb.com/invite-from/ColoradoRider.

Here's what I bought. I'll let you know what I think about them when they come in: 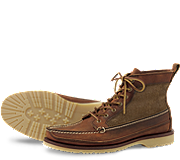 Good looking boots and right in style. Have a pair of RW loggers and they are great, I believe you will be very happy in these. Coming to your fair city for a big meeting next month. Never before in the city of Denver so looking forward to it. You got these boots for a very good price. Enjoy!
B

seabass said:
Colorado
Thanks for the link
I bought the round toe heritage with the white wedge sole
I need something comfy
Make sure you get your credit
Gracias che
Click to expand...


Thanks - I got the credit and appreciate it. The Clymb added some Red Wings I'd never seen before the Red Wing flash sale ended. They also have some Filson on sale including their boots. The best Filson deals "IMO" are the midweight sweater and moleskin shirts for $69.

Here's some of the more interesting Red Wing Heritage's they had:

I checked out the Red wings. Unfortunately their size selection was very limited. Price is good though.

Sigh. Red Wing used to be the place to go if you needed an unusual size.
It appears they have abandoned that niche. I recommend Wesco.
C

feltfan said:
Sigh. Red Wing used to be the place to go if you needed an unusual size. It appears they have abandoned that niche. I recommend Wesco.
Click to expand...

Red Wing still makes a large variety of widths in their more popular work boots but in the Heritage collection I think they've gone to only D widths (and it's a slightly narrow D in my opinion). If you're looking for a serious workboot there's also White's boots for unusual sizes in addition to Wesco.

White's are much better in my opinion if you're looking for a work boot you can dress up. White's semi dress is my favorite in this niche. If you're going straight dress boot then Alden and Allen Edmonds can also address unusual sizes in the US. As far as Red Wings go some of their boots fit narrower than others (logger and Iron Rangers especially) and it looks like they abandoned the E width in the Heritage line.

The Red Wing flash sale ended that I scored the Lineman's on but they still have some Filson/Wolverine collaboration boots on TheClymb.com like this one discounted from $440!!! to $179:

They've also got this boot from Filson/Sebago collaboration for $59 discounted from $185. Anyone have feedback on this boot?