I'm noticing in these photos that a lot of the more conservative "middle aged man" suits are cut very similar to modern classic fit suits sold today. The length of the vest and the rise of the trousers are the most obvious traits to me.

There are so many different styles nowdays so really depends on which you refer to but I'd say the most obvious differences are:
- trouser rise much higher back then
- trousers today usually more trim fitting
- trouser break today is often ridiculous (too much break)
- coat length (much shorter today)
- lapels
- shoulder and drape

ALthough I do see some pictures here that look very 'modern', most of them in my opinion or quite different to todays norm

@herringbonekid, the scans you have inserted of the youngmen wearing the belted suit with the buttoned pockets. Where on earth can I find such a suit?
Personally I would like to try the reproduction area (given that I'd rather leave the originals to the collecters who can take proper care of old garments). I've talked to local suit tailors and searched the internet for quite a long time now, but all I seem to get is these old illustrations of this particular suit. So if anyone has any leads.
There was one tailor who could reproduce it, but the cost was quite significant (1500+ range). Though I understand, that's just above budget.

Kabel, not sure which scans you're referring to, but i know that small Japanese companies like Django Atour and Adjustable Costume have made early 20s inspired jackets and suits in the recent past, but i don't know what is currently available from either, and they're not easy to order from due to their sites being in Japanese.

SJC is offering a late teens-early 20s style suit soon, but i don't think it has buttoning pockets or all around belt.

herringbonekid said:
SJC is offering a late teens-early 20s style suit soon, but i don't think it has buttoning pockets or all around belt.
Click to expand...

Actually the SJC teens/20s style suit WILL feature an all-around belt, but it will be sewn-in.

Who or what is SJC?

herringbonekid said:
Kabel, not sure which scans you're referring to, but i know that small Japanese companies like Django Atour and Adjustable Costume have made early 20s inspired jackets and suits in the recent past, but i don't know what is currently available from either, and they're not easy to order from due to their sites being in Japanese.

SJC is offering a late teens-early 20s style suit soon, but i don't think it has buttoning pockets or all around belt.
Click to expand...

I believe one of the swedish stores (I think it's unionville) is starting to bring a few items from Adjustable Costume with a very limited stock of items though.

Dirk Wainscotting said:
Who or what is SJC?
Click to expand...

He is Simon James Cathcart which short is SJC. A fellow lounger who built his brand and this is the store: http://www.simonjamescathcart.com/

Check out the forum for the suits discussion and other items.

I see. I like some of the things on offer there, but this from the 'about' page puts me off a bit:

SJC is an apparel (and soon to be lifestyle) brand
Click to expand...

Really? A lifestyle? I don't know, maybe it's because I'm a maker and not a retail entrepreneur that I find the whole 'lifestyle' angle unappealing and false. Having a lifestyle is one thing, it's just how you are; buying and selling it is a spurious concept. Though I'm aware that's the origin of most 'lifestyles' now (and to some extent always has been for various groups throughout history).

I also like the idea of a brand that appeals to a whole lifestyle. To me, retro/vintage is not just about clothes, but everything in life. To satisfy this insatiable urge, I have to go seeking out all different sources for different aspects of life; apparel, accessories, hair product, music, movies, dining, recreation, etc. While there is some thrill in seeking out and finding these esoteric things, it would be nice if some of it was more cohesive.
Last edited: Mar 1, 2017

Isn't the joy that it isn't in one cohesive, easy package? That would be like a shopping mall or getting everything in your life from Amazon. That sort of thing causes people to narrow their view by not encountering things outside their tastes. It's weird.
I'm also a long-time aficionado of the 'golden era', but life is bigger than just that. I'm a big G.F. Handel fan, but I don't go about in a powdered wig and breeches. Is having these things invade your entire life a good thing?

Not to mention the niche marketers who love having groups to sell things to.

A truth: were you to be a guest in my house, by the time you made it to my closet, you wouldn't be shocked to find a bunch of vintage suits living there. For Simon, I think "lifestyle brand" is simply a recognition of this fact. Our tastes tend to encompass more than one kind of item. People who enjoy the current leisurewear that Simon is selling - the melton waistcoats, the knitwear, the specs, will probably be excited about the rigorously authentic tailoring coming down the pike.

I don't think there is an insidious, colonizing spirit behind the term, for Simon. He's not Apple, and he doesn't want to control anyone's life. He just recognizes that people who are into the vintage aesthetic in one area of their consuming, may appreciate being offered authentic reproductions that meet other needs.

The way I read the concept, SJC is ultimately aiming towards something like an old style gentlemen's one-stop outfitters, which was very much something that existed during that period. Searching bits out can be fun, but I've no aversion at all to making life easier if I can get it all in one place!

Okay, I acknowledge the points of you two fellows above me. I have no real axe to grind with SJC - and I'm sure he couldn't give a hoot what some random twit on a forum (that's me) thinks about his enterprises.

It's perhaps a knee-jerk reaction to the ever-encroaching 'lifestyle' marketing going on, with little respite. I'll cash in my chips and go to the bar to relax...
Last edited: Mar 6, 2017

I get what you mean, though. "Lifestyle marketing" is a loaded concept. It's one of several reasons I won't buy an Apple product again.

The only apples I buy have a single core and minimalistic design. One of them a day keeps the doctor away.

From the 1920's volume of the Decades of the 20th Century series, by Nick Yapp.* One of my go-to references for 20s clothing.

A typically well turned-out male of 1926 in hat, tie, suit, cricket sweater and…roller skates. His jacket seems to have either a linked button, or one of those interior buttons to create the kissing lapel look, which is coming undone. Louis B. Mayer, 1928, seen here with a young Jackie Cooper, who is unwittingly signing an agreement to become his final horcrux. Note the narrow, low-gorge and very open-notched lapels. If I saw a jacket with lapels like that in my thrift store junkets, I would imediately think '1980s.' 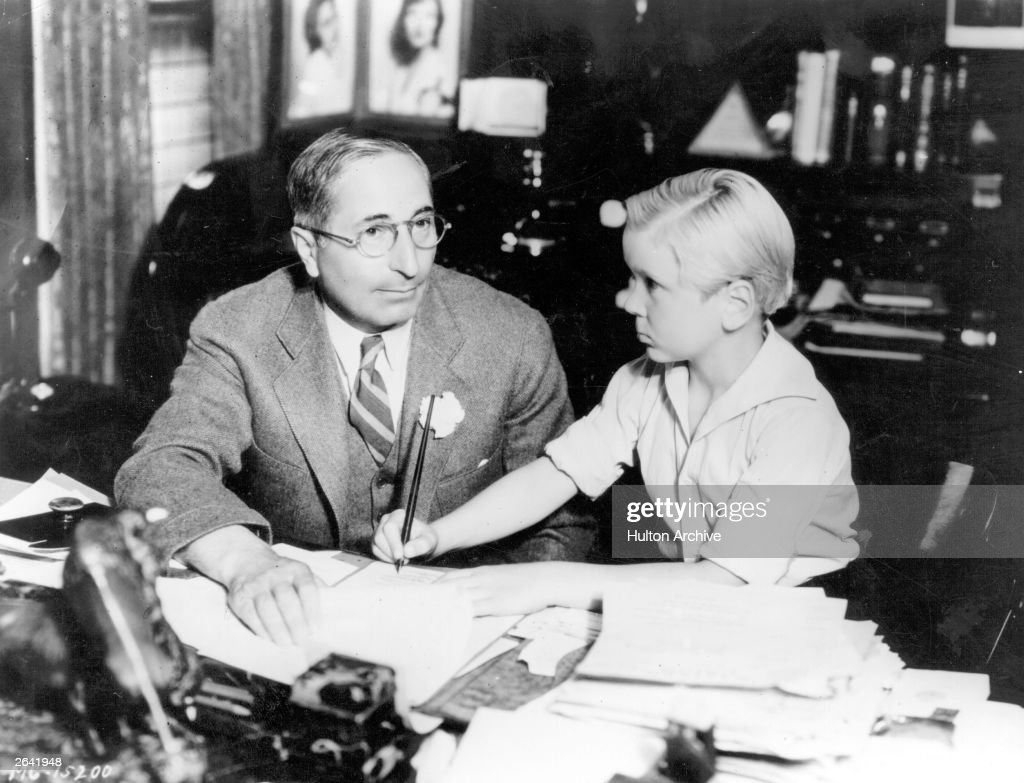 Family at the beach in Essex, 1922, belt-backed or Norfolk jacket. I can't tell from the picture if this jacket has a yoke, or if the fabric at the belt is pleated or just gathered. I do notice that, although the shoulders are narrow, the sleeve insertion looks fairly square and the sleeveheads well stuffed. Or, maybe this gentleman just has square, well-stuffed shoulders.

I like this picture because the raised arms of the gun-toting fellows gives an idea of the cut and drape that you can't always see in a photo with arms down at the sides. Two- and three-button models, Petersham, England, 1922. 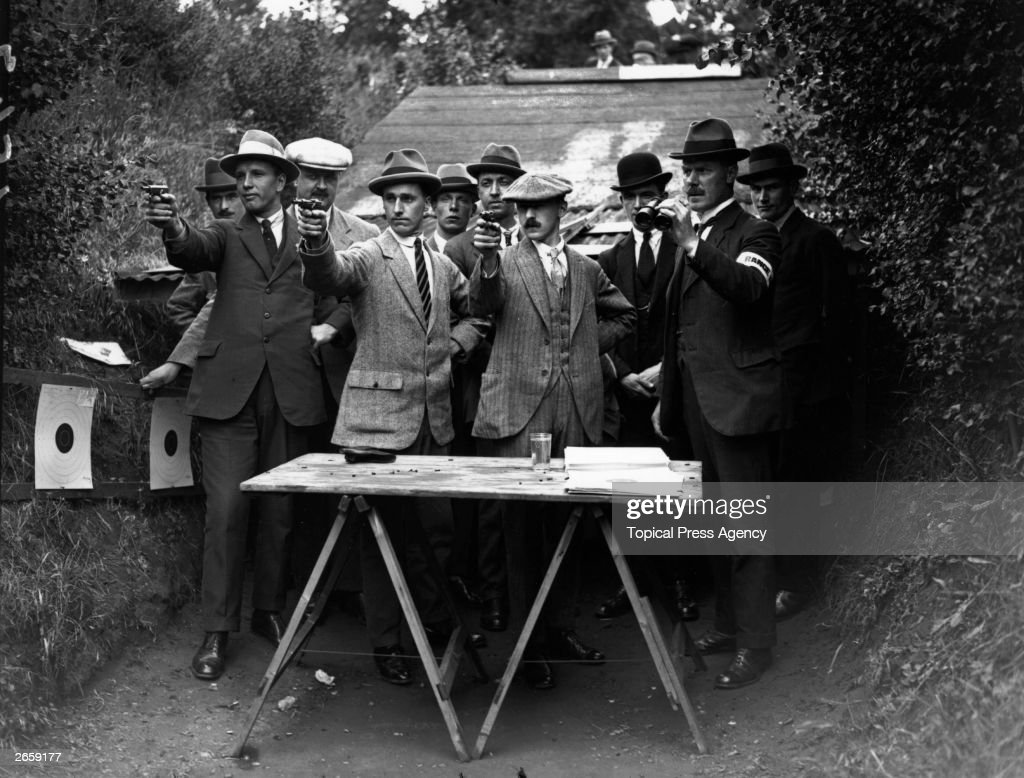 *Yes, these are images from the Getty archive, from which this book is printed. Being aware of their reputation, I did some research on linking to Getty images, and it's apparently okay nowadays. I wouldn't wish to put myself or the forum within striking range of legal headaches, so if this is not as kosher as I think it is, I won't get in a snit if the post is deleted.

Dirk Wainscotting said:
Who or what is SJC?
Click to expand...

Here is one of mine. 1920s British city suit with bowler. 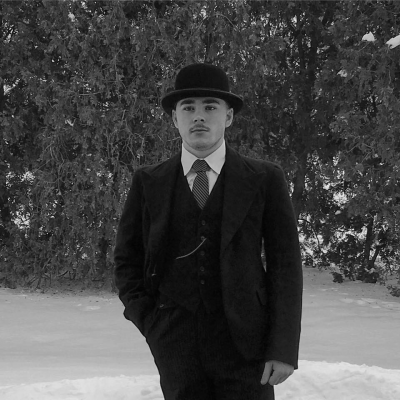 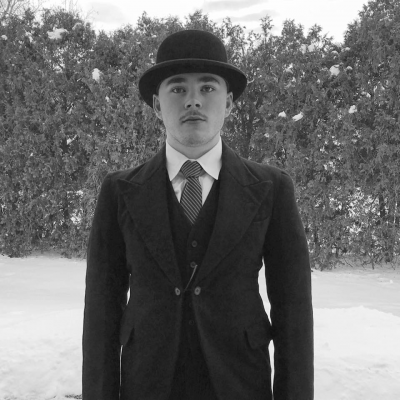 Nice!
Any labels? Is it dated?
P