From 1985 through 2015 I produced, directed and wrote a series of about sixty Audio Dramas for Random House Audio Publishing. These productions had run times stretching from one to three hours, casts of four or five up to over twenty actors, and sound effects created both live in studio and, later, in the field and on realistic locations. Here is another important lesson I learned over the years: 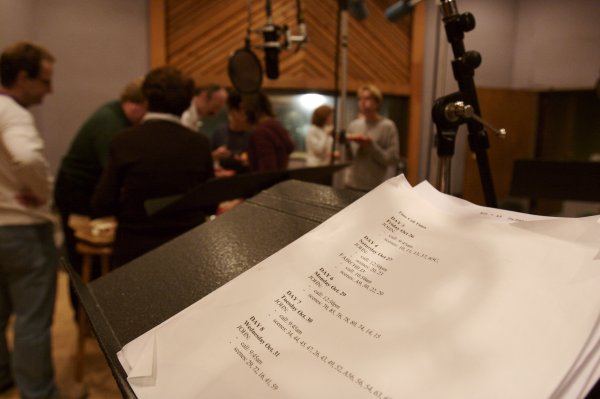 When I first started in the business, we were producing 60-minute episodes with a limited cast, often less than six actors. These were done in a style much like “live” Radio Drama. There would be a cast read through in an office a day or two before we went into the studio. The sessions were usually limited to one day of production. Later productions were considerably longer. The last one, in 2015, ran 180 minutes. The casts were larger and the recording sessions were done over a period of days and were recorded out of sequence. Each actor had a discrete track and there was LOTS of editing. The following observations relate to this later style of production:

The actors were AFTRA union members. This meant that they were paid by the hour with a 2-hour minimum. A day’s work at AFTRA Phono Code paid about twice the basic SAG rate. Easily half of the budget for our shows was spent on cast. The rates are different now, but in those days financial considerations made carefully scheduling the actors EXTREMELY important.

The script was broken down into scenes and the actors in those scenes were placed in a graph. Recording days were arraigned so that we would have the least number of days and then the least number of hours with each actor. Within that system we would then try to organize the work so that it was as much in the order of the story as possible. The economics of this were balanced against what we were paying for the studio. Sometimes the cost of calling in a certain group of actors was so great that it was worth recording for fewer hours and just paying to hold the studio.

Before I get into my formula for getting the most out of a scene, you’ll have to understand a few more realities about these productions and the specific way I work.

I tried on one show to get the actors to memorize their parts which, in the best of worlds, would have led to capturing better performances more quickly. Realize, however, an actor in a TV show memorizes 4 to 8 pages a day, in features it’s around 2 pages. We tended to record around 20 pages a day. Financially, the idea of rehearsal, which is where the memorization gets solidified, was a mixed bag. AFTRA required it to be paid at the same rate as recording so, eventually, we decided rehearsal was a waste of money. We couldn’t afford enough of it to make a difference.

Audio Drama, as opposed to movies, leaves a lot of room for editing dialog. With no picture continuity to worry about you can cut together any performance that works. Because of this I do a LOT of editing. I consider the recording process to simply be the collection of raw material. I like a lot of raw material.

So, here’s the formula I used: Each scene was allotted 30 minutes plus 10 additional minutes per page. This means a four page scene would be scheduled an hour and ten minutes. That includes time for the actors to enter the studio, it allows for adjusting mics, saying hello, and a certain amount of kidding around. After that I’ll usually record 4 to 8 takes of the entire scene.

I always used professional actors working, or trying to work, in Hollywood, but I like to write scenes with more than 2 people so there’s a certain amount of “who’s doing what and when” that has to be figured out. So, 2 to 3 for these takes are “rehearsal.” Once everyone knows what they are doing and we’ve recorded a few, I’ll break it into smaller chunks, each straddling a “beat” within the scene. Then I may work to get specific lines, or with a particular actor. What I need to hear to know that I’m done with a scene is an honest and heartfelt portrayal of every line, if I have time, I’ll try to get more than one version of that. If I hear something particularly good or interestingly different, I may take some time to pursue that.

I don’t give a lot of direction because often you get too much of what you asked for. More likely, I’ll take over one of the other actor’s roles and perform my lines in a way that pushes the actor I’m working with to do something different. Once we have a scene nailed, we often improvise, but that means changing the lines in the script and then performing it the new way, not making in up in the midst of a take. We discuss the change, and what we are trying to accomplish, first.

Unlike film, where resetting everything and everyone to do another take is time consuming and the actor has time to relax and fall out of character and out of the moment, doing a lot of takes in audio can go very quickly. It is therefore nowhere near as exhausting as multiple takes in film. We’ve occasionally recorded complex scenes, like with 4 to 7 people, and run to 70 takes. The actors barely notice. Sometimes I’ll just say, “go for three,” meaning do three takes back to back without a break. It’s very common that it just gets better and better because it’s easy for them to remember what happened the last time and to build on that or change it. What I’m always looking for is subtly different takes, as I said I’m recording raw material … I really won’t hear the finished product until we create it in editing.

This way of working and scheduling was particular to the way we worked at the end of our run. It won’t be appropriate for most other people. But it was the result of trial and error and finding what worked the best under changing circumstances. I encourage everyone to evolve your own best way of working.
You must log in or register to reply here.
Share:
Facebook Twitter Reddit Pinterest Tumblr WhatsApp Email Share Link