Blare said:
I believe That meme is (memes in general really) made by, used and targeted at a younger crowd. The idea being that some younger millennial and gen Z cusp guys throw on a cheap hat will make them look cool but instead in their eyes it makes them a “tool”... or whatever word they choose.

I’m gonna step out on a limb here a bit. I think for the most part us folks that frequent this lounge tend to be of a bit more mature crowd… and those of us who are not of middle age or older do tend to be a bit older souls.

Those throwing around this meme or the “fedoras make you look a certain (bad) way” crowd… I think for the most part mean to target those among their own age group.

Now that is not to say that in their eyes WE are doing it “right” … it is just that to 20 somethings. We are off their radar... as “old guys… who probably wore fedoras back in their day”. Like somehow we were all around and wearing these vintage hats when they were new and in style in the 1930s to 1960s.


THEN as a result of that.. came the “Trilby“ is a cheap crappy alternative to a “real” Fedora worked its way into the consciousness of even lounge folks mostly because of cheap modern target/Walmart sewn together hats. Which creates a sort of “brim snob“ society peering down on even very well made short brim hats from the 60s and even 1930s styles.


so long for now…

That GIF gave me a seizure. 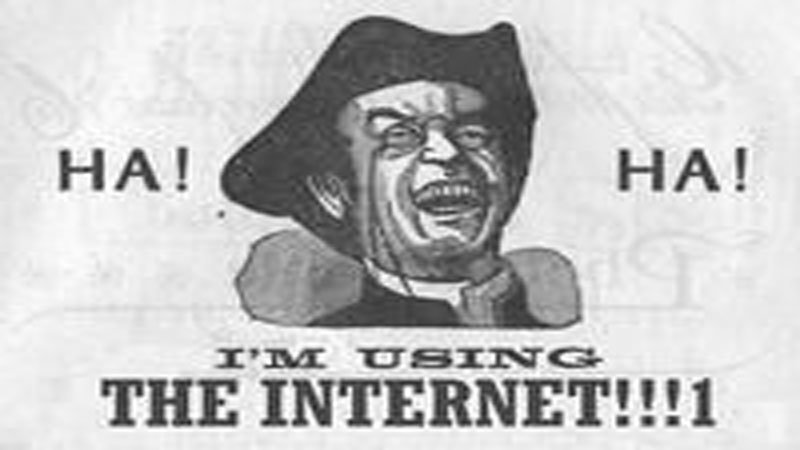 GHT said:
View attachment 437277
It's called Guatemalan Patchwork. Well that's the official name, I can think of others.
Click to expand...

GHT said:
View attachment 437277
It's called Guatemalan Patchwork. Well that's the official name, I can think of others.
Click to expand...

Thought it might be a prop from Joseph and the Amazing Technicolor Dreamcoat. 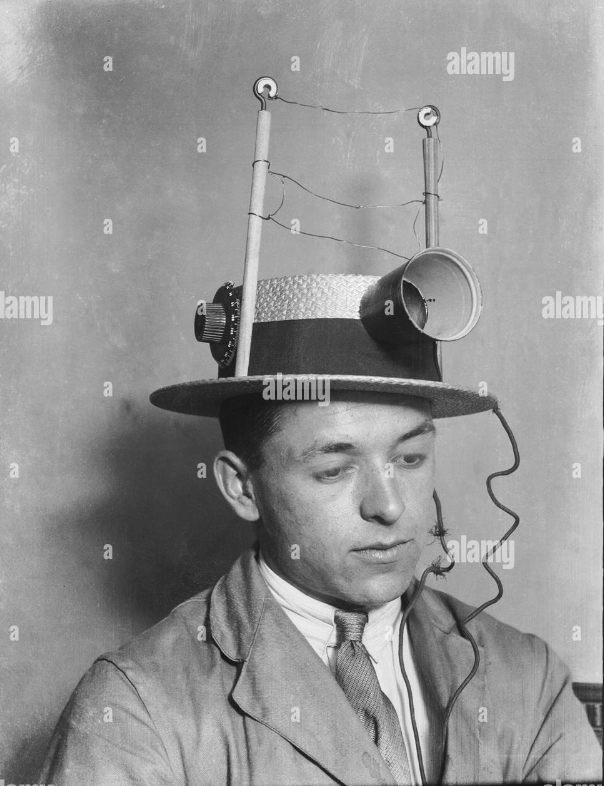 What is old is new again

I really like long hair finishes, but this Huggy Bear is too much for me 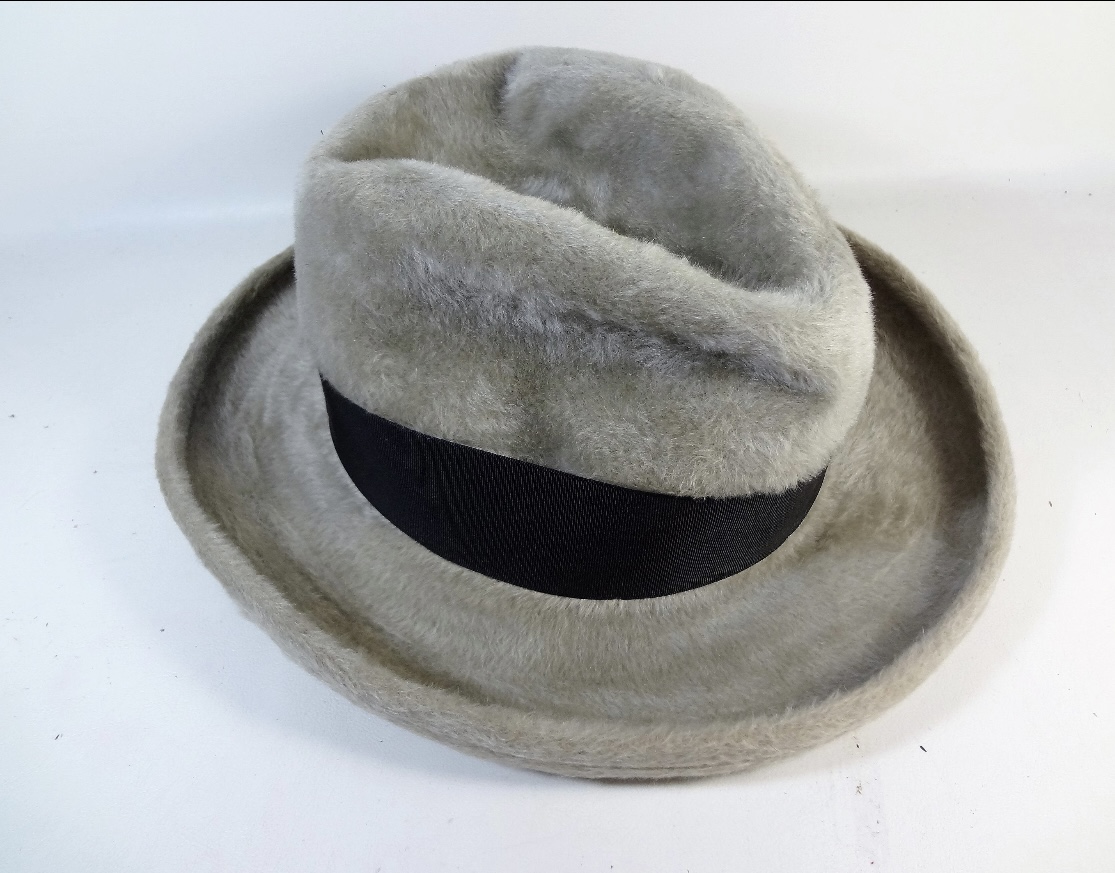 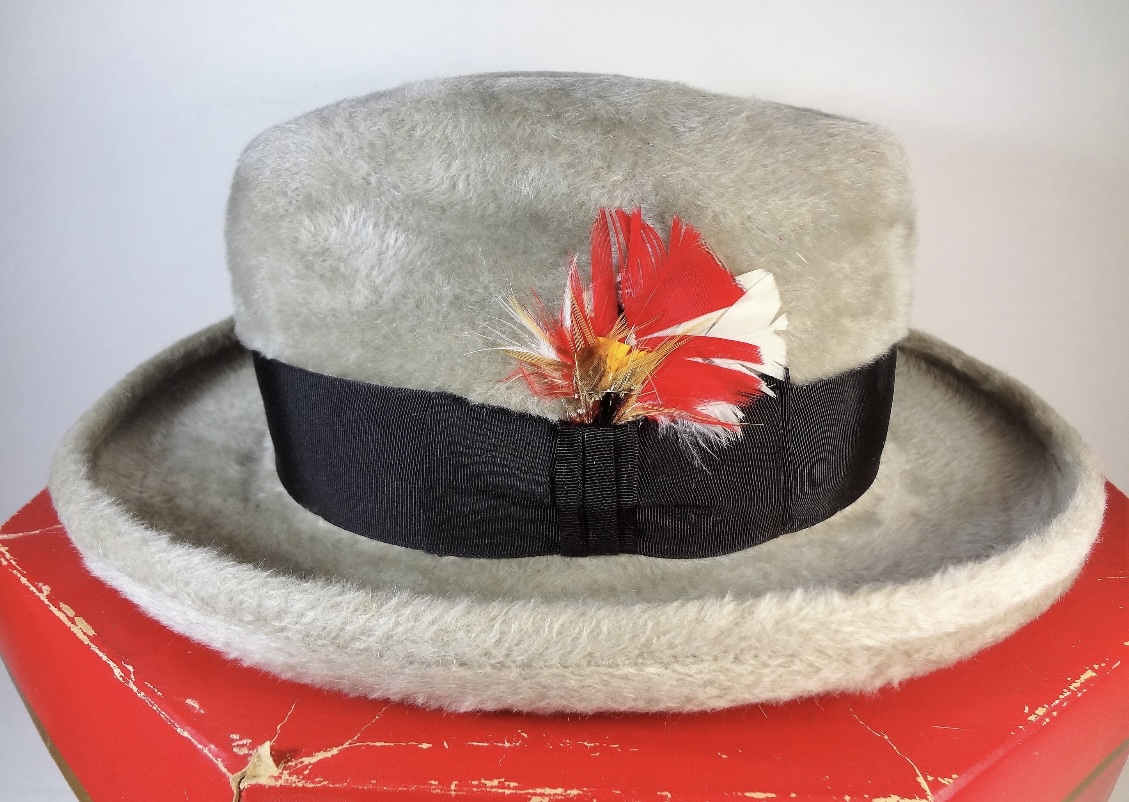 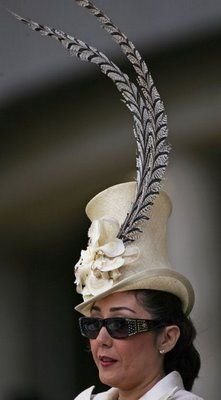 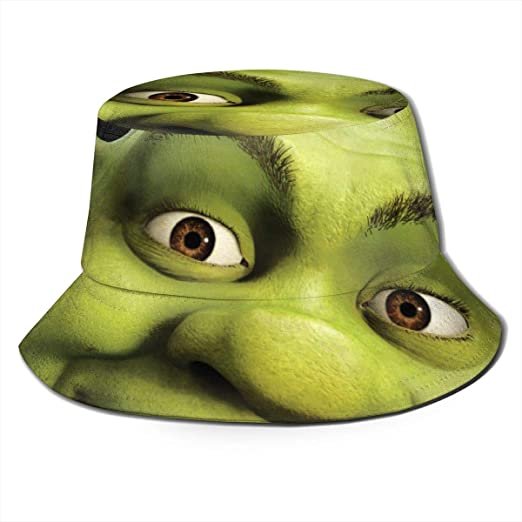 The first one is from Ladies Day at Royal Ascot, the second, words fail me.

I would wear that hat simply because it would annoy all of the right people.

Puts me in mind of a costume piece for a Comiccon type thing. Something approximating an animated character's hat, with a stylised low-resolution look.


HANDS_OFF_THE_HAT said:
They probably meant those ghastly trilbys which were recently so popular among a certain crowd. I just don't think most people know the difference in hats, and the "Tips Fedora" meme is not helping.
Click to expand...

It's interesting how the terminology varies - though if course it's been discussed at length over the years on TFL. Suffice it here to say that it still interests me how the same thing means something different elsewhere. Here in the UK, 'Trilby' would, at least to anyone much over 45, mean a soft felt hat with a middle-height crown and a brim of 2-2.25" or so. Sort of thing that was a very common hat in the 50s / 60s, what you'd see Roger Sterling wearing in Mad Men. For younger people that has now been supplanted (largely through a somewhat Americanisation of popular culture on the English-speaking internet) by the notion of the cheaper, textile hats. For older folks, particularly those of 65ish and above over here now, 'trilby' means to them what 'fedora' typically means to an American. Some hat folks here differentiate between a wider-brimmed, American style fedora and a narrower brimmed trilby, trilby being what you might call a 'stingy brimmed fedora' in the US.

Who? said:
Thank you. I'm still not sure I really "get it" but that's just me I guess.
Click to expand...

It is an odd meme. I've seen it associated also with the term "iGent", used as an insult. As best as I can make out, the general sense of it is that these "iGents" in their "trilbies" or "fedoras" are a sort of hipster type who obsess over details on line. Geeky, but over things like manners, when to hold a door for a lady and such. The defining characteristic seems to be that they want to be seen to be doing What Is Correct, following a set of rules, as distinct from being interested in social contexts and mores as a cultural phenomenon, or because they regard those "rules" as simply polite or nice. Usually carries an implication that the individuals involved are somewhat socially inadequate, fantasists who only really "exist" online. Like all stereo and archetypes, I'm sure some of them really exist, even if far fewer than believed, and certainly not everyone in a hat.

FWIW, I've always found the only people who seem threatened by a hat or a suit or whatever are desperately afraid of anything different than the norm. The most positive reactions I've ever had for what I wear have almost exclusively come from hip hop kids, goths, punks - people who know what it is to put together a look, and appreciate someone doing their own thing for itself.

On the matter of those cheap, textile trilbies.... in all truth, I'm reluctant to criticise them. They're not all that dissimilar to the first wool trilby I bought myself at seventeen - a significant investment then of all of twelve pounds in a Debenhams sale. That hat put me on the road to what I wear now. It's not a hat I'd buy now (I've even half-heartedly listed it on eBay as I am trying not to hang on to so much sentimental baggage, being a recovering hoarder), but it got me into brimmed hats in a way that I doubt I might have done so well had it been a case of making the jump straight to a £100 furfelt.... I like to hope the kid who buys one of these and enjoys the hell out of it will maybe one day graduate to something we'd regard as better, and they can function as a gateway. And even if they don't, if it helps to normalise and popularise hat-wearing again by making the idea of wearing any sort of hat seem less, well, odd, than that's all to the good....


GHT said:
View attachment 437277
It's called Guatemalan Patchwork. Well that's the official name, I can think of others.
Click to expand...

I can well imagine I'd have enjoyed one of these twenty-five odd years ago when I was still going to festivals... Puts me in mind of a sort of psychadelic boonie hat. The boonie hat being, if memory serves, a 'Nam era successor to the Daisy Mae... I had a few boonie back around twenty years ago (might still have one somewhere), including one I bought in a surplus place in downtown Warsaw that went by the glorious name of "Rambo Demobil". This Summer, I've been halfway tempted to try a cheap repop of a denim Daisy Mae some time... Not so ideal with linen obviously, but with a pair of jeans and a loose polo shirt, might be just the thing...

deadlyhandsome said:
I really like long hair finishes, but this Huggy Bear is too much for me

If baseball caps can be worn backwards, why not fedoras?

I wonder if that’s intentional, or an accident from not knowing any better.

I think you've answered your own question.
I

Maybe this is a Kid Rock fan?

Maybe it’s not on backwards. Cousin Itt with a trim: 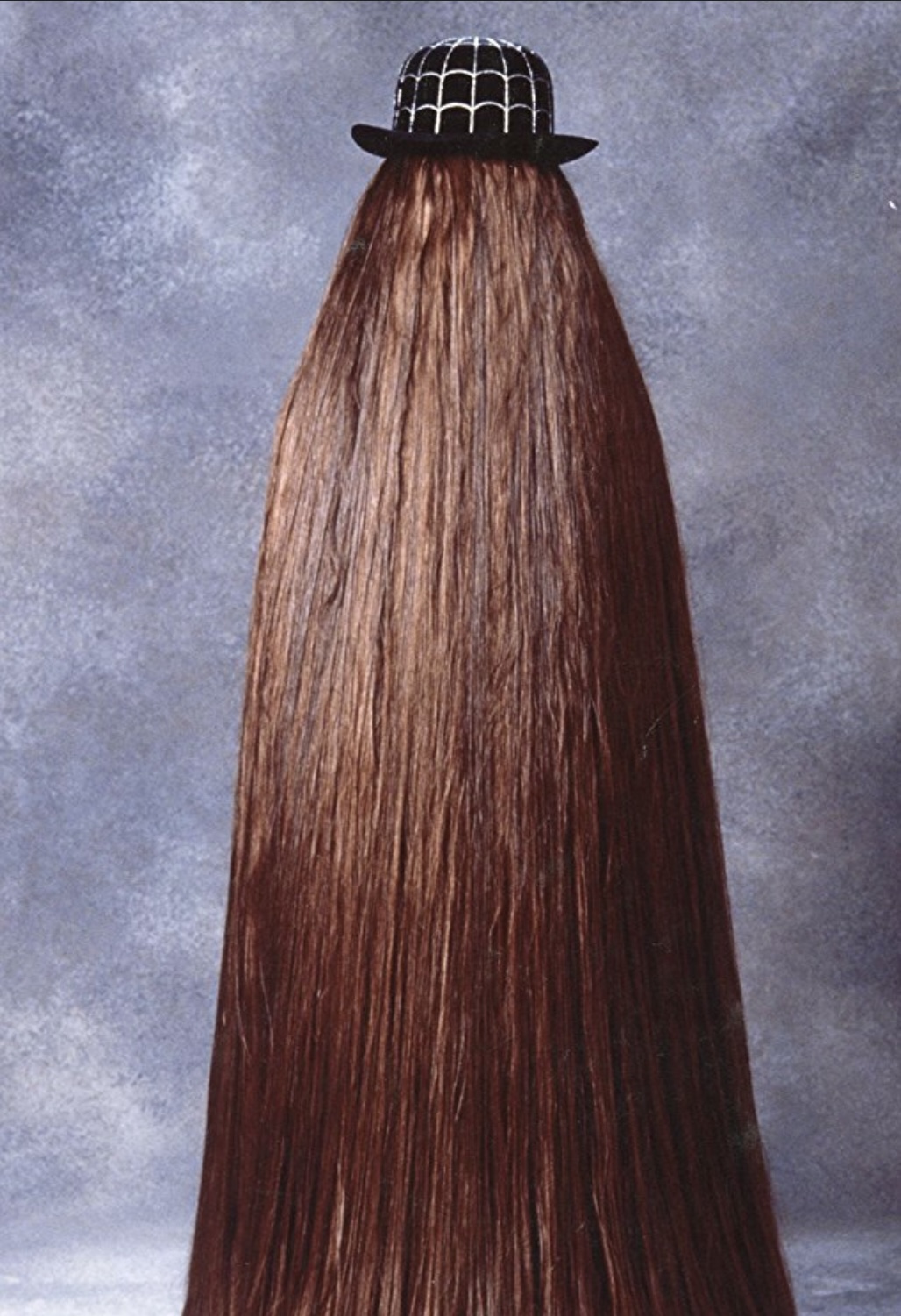 Are you ready to see some "Fashion News"? (I'll post the WTF in the post below this one) 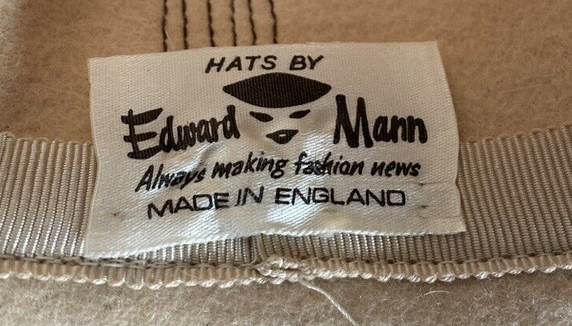 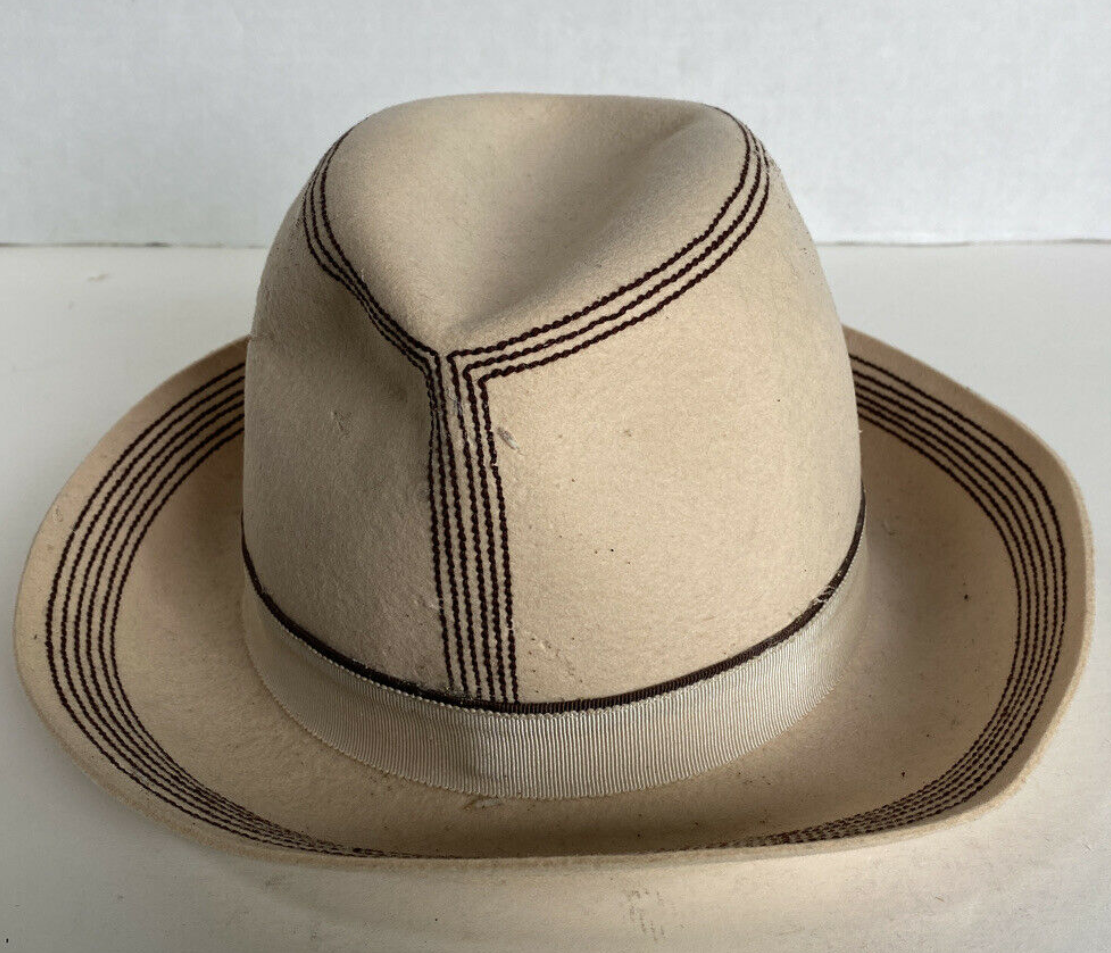 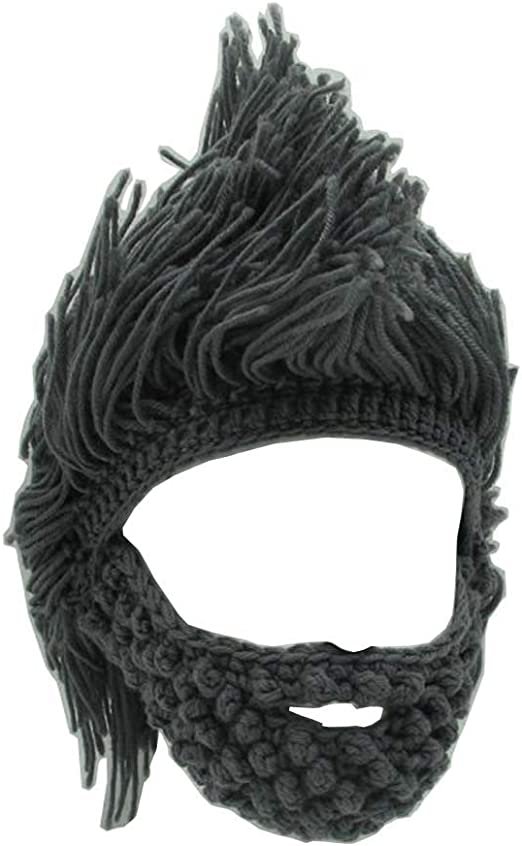 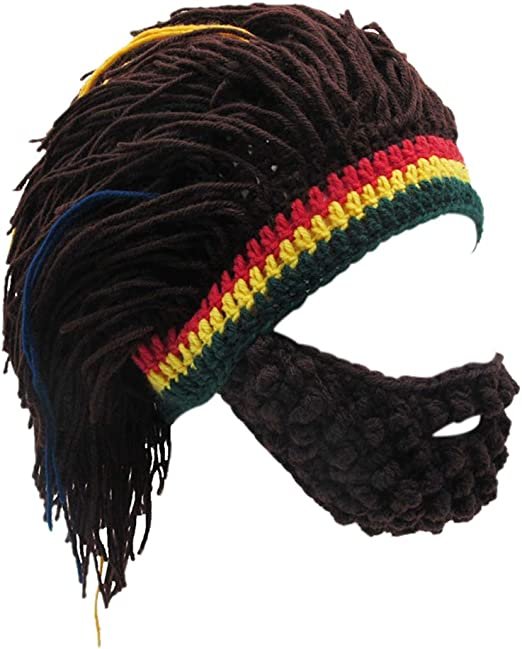 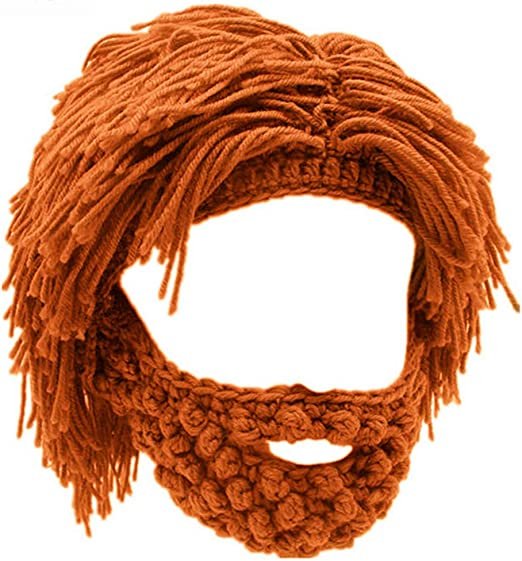 Marketed as a place to keep a pack of cigarettes: 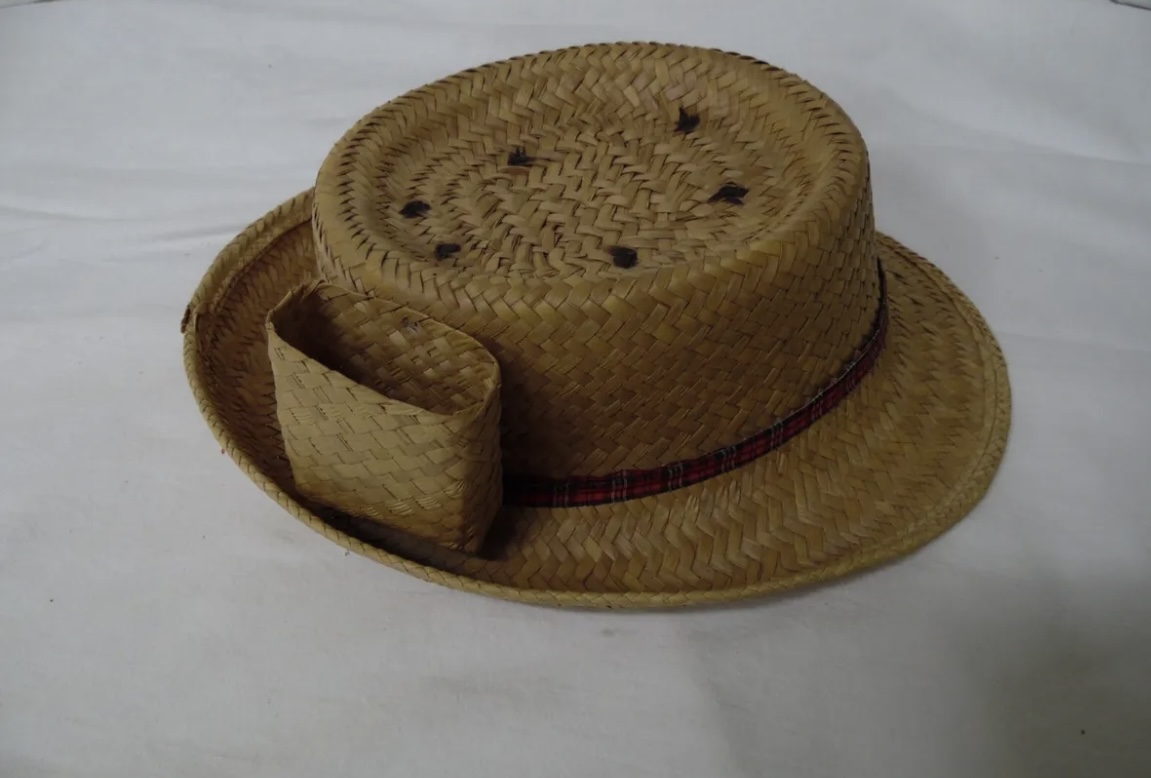 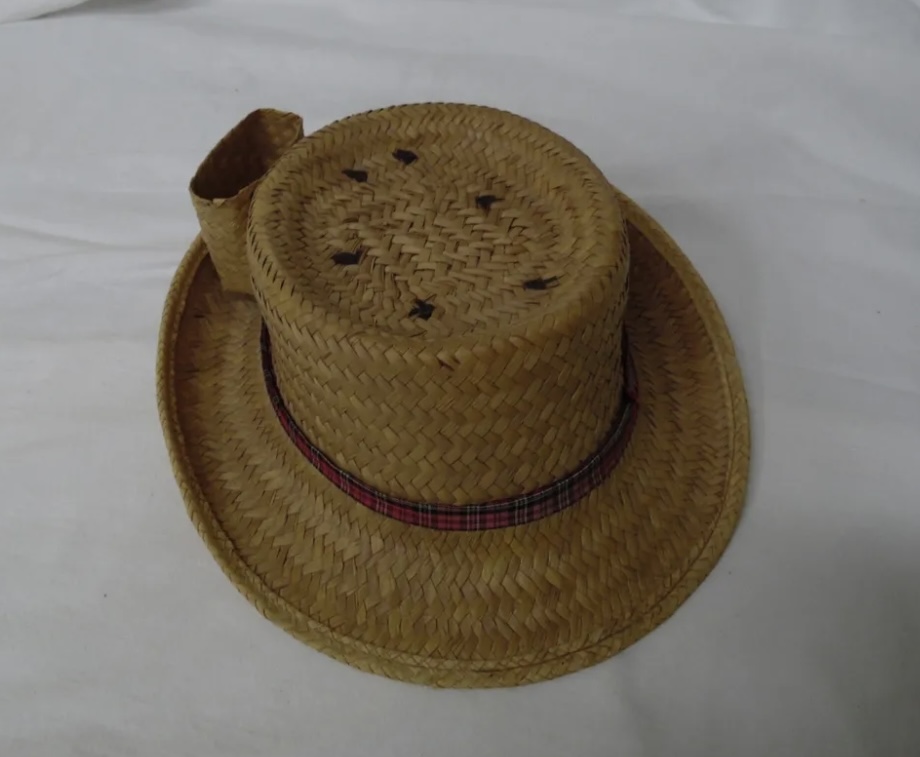 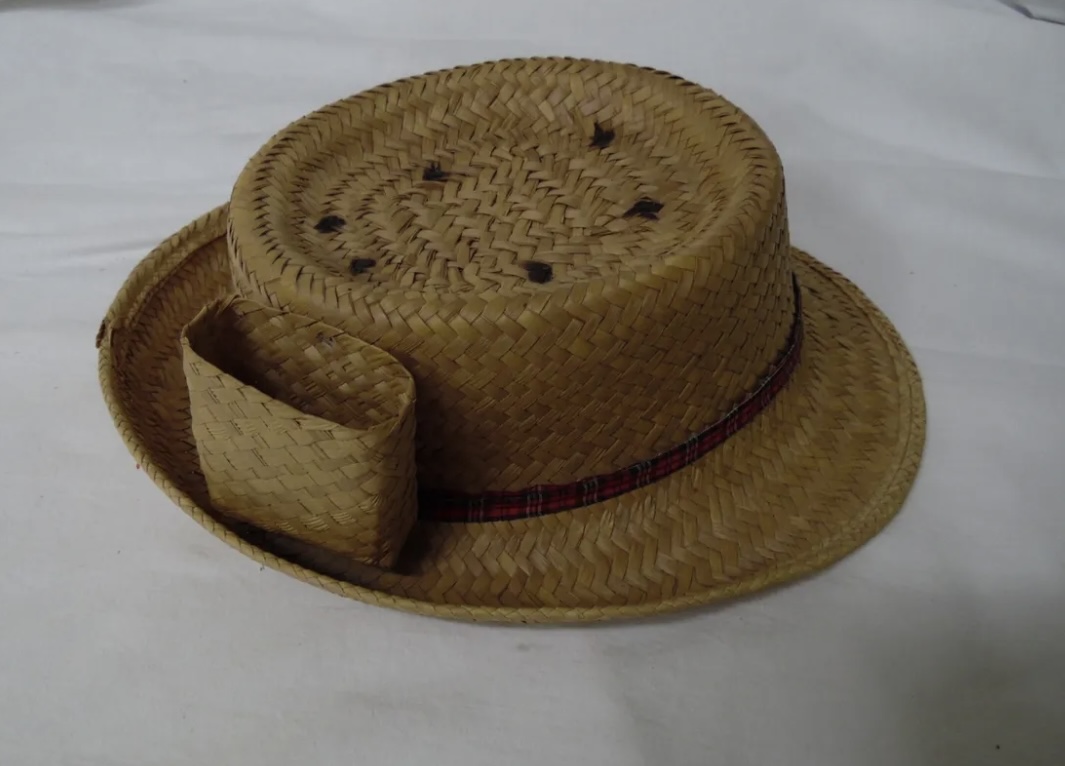