If I had to pick one girl from the golden era 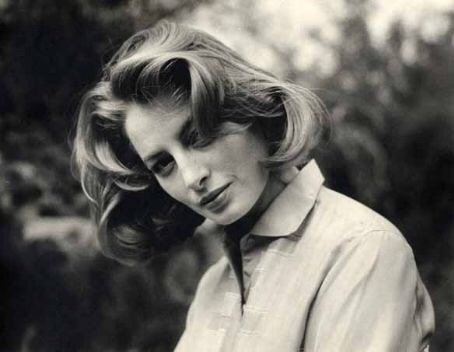 STUNNING!
Gosh, that is like a dream isn't it...

This thread got me to thinking about some actresses (I'm sure the same is true for men, this thread just has a female theme) that had one roll / one movie / one part where they shined like they never shined before or after. For example, IMHO, Rita Hayworth never sparkled more, never lifted off the screen with more life than in "Glida."

It's not that she was "prettier" in "Gilda" - maybe she was prettier in one of her other movies - but that she coruscated in "Gilda." You could feel her energy, her joy, her power in that role - her beauty augmented that (or maybe that augmented her beauty), but she was all of it. This presence - this force of will - made Rita Hayworth in "Gllda" stand above Rita Hayworth in all her other movies.

I feel the same way about Julie Christie in "Dr Zhivago." She owned the role, was Lara, lit up the movie and forced the movie to be about her whether this was intended or not. I've seen her in several of her other movies and, of course she is a beautiful woman and talented actress, but in none of those did, IMHO, she ever so own a role and drive a movie they way she did in "Dr. Zhivago."

Without hijacking this enjoyable thread - hopefully, just adding to it - do others have examples like these?

N.B. I feel the same way about Catherine Deneuve in "Belle de Jour."

Location
The Heights in Houston TX

For me, still Mabel Normand. Hears a early picture I found of her
D

Joan Bennett is an interesting case. It might seem as though she isn't much of an actor. Objectively she doesn't have much going for her other than being pretty, standing up straight, and saying the lines clearly. But I can't deny that she is in some of my favorite movies.

Fritz Lang uses her face to create a special effect of dream and glamor in The Woman in the Window above. In Suspiria, a great horror movie, she is equally frightening as a dance instructor and as a witch. (And, in the 1970s, she still has perfect posture!) For my money, her best, most unselfconscious performance is in Me and My Gal (1932). Here is the "Strange Innertube" scene:


Given her limited resources as an actor, the range of her performances argues for some kind of genius.
S

I wanted to like this movie - Robinson is one of my favorites, but (and it's been a long time since I saw it) it seemed to drag and I wasn't convinced of anyone passion.
S

These days I find myself watching old movies to enjoy just the clothing and nuances.

SurfGent said:
These days I find myself watching old movies to enjoy just the clothing and nuances.
Click to expand...

God yes. I stay with many of them for that reason even if the plot, story, characters are only marginally interesting. Recently, I watched "It's Love I'm After" a 1937 movie that was, basically, boring, but the clothes, cars and sets were time-travel joy and the social customs and cultural references were interesting enough to keep me engaged as the plot limped along.
S

Then once in awhile you come across a gem
D

Woman in the Window has one of the lamest endings in the history of cinema. (Possibly rivaled by another Lang film, Ministry of Fear, where Ray Milland has a fit when someone offers him cake.) The truly great Lang / Joan Bennett / Edward G. Robinson / Dan Duryea collaboration is Scarlet Street. The ending of that movie doesn't pull its punches.

One of my favorite details in Scarlet Street is the idea that Joan Bennett's character isn't actively conniving and manipulative. She's more low energy. She drifts along and takes advantage of Edward G. Robinson's obsessive love by accident. Her character has a silly nickname, something like "Lazy Legs."
D

It occurs to me that I have not addressed the topic of this thread. I have obviously given some thought to Joan Bennett, but my heart belongs to Paulette Goddard. I admit it. I have a thing for redheads. It's a lot like Prometheus seeking fire and Icarus having his wax wings melt. At this stage of life I consider red hair a warning.

So I have a poster of Rita over my desk at the office.

Lots of people ask me if I'm tunneling out of the office. Of course if I did that; I'd be in the lobby. Not exactly a great escape plan.

I was thinking about this thread yesterday and know that most names have already been mentioned - some by me - but wanted to bring up Hedy Lamarr again as I've been coming around to the belief that she was everything: brains, independence, courage, talent and beauty.

Many, myself included, have great respect for Katheryn Hepburn, but Hepburn started a few steps up the ladder with a wealthy and supportive family - not her fault, but it's easier to be independent and courageous with a safety net below. Lamar, had to escape a domineering Austrian (in that day, probably a redundancy) husband to restart her career in Hollywood - no wealthy Connecticut family to run back to if things got tough.

She also did nudity well before it was common and, and this is the cool part, didn't seem to sweat about it one way or the other. She didn't see herself at the vanguard of feminism or as a fallen woman, just took it in stride - that's cool. And then, of course, we have the not-believable-but-true story of her inventing, with a partner, a radio guidance system for torpedoes in WWII that is at the core of today's cell phone industry technology. All while being a tier-one Hollywood star and one of the Golden Era's arresting beauties.

If it's just a evening, any one of a dozen or more - Lombard, Loy, Hopkins, Rogers, Garbo, (not Crawford, she scares me) - would be outstanding company, I'm sure, but for the real deal - for the long road of life - Lamar might lead the pack.

Location
Aboard a B-17 Flying Fortress