I found this nice Vietnam War era GI holster set with web pistol belt & mag pouch to carry my home defense M1911A1 at home or while at the range for my side arm. 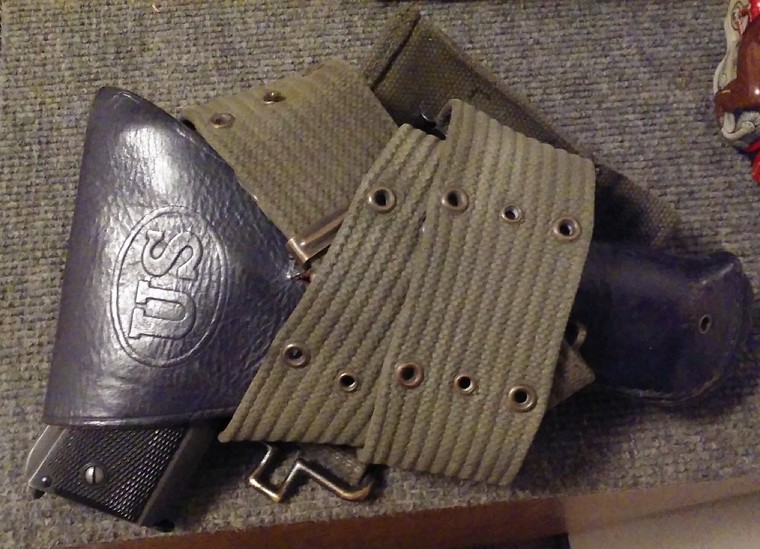 GreatWhiteHunter said:
OK, went to the gun store last night, the guy there was a jerk. Told him right away I was left handed, had never owned an automatic but had shot revolvers for a number of years. First one he pulled out was the New Ruger American Compact. I liked the gun right away, except it was a pro model (no manual safety). So I asked him about accidental discharge and trigger pull of a revolver verses the automatic. Based on his reaction, you would have thought I just called his daughter a prostitute. Proceeded to get a lecture that I didn't know what I was talking about (duh, that's why I asked the question to see if it should be a concern). I handed the pistol back to him and he immediately went to selling another person a full size one. I would have gladly waited until he was done to ask my questions but there were two other guys farther down behind the counter that were just standing there talking to each other (place was empty except for me and the other guy buying a pistol). You would have thought he would have called one of them down to answer questions for me. Nope. Treated me like I had the plague. So I just left. Later I found out via the internet that they make a version with a manual safety, he just didn't have one I guess. If he had just told me that and said he would have to order it for me, I would of said great and bought it on the spot. What he didn't know was I was carrying $1000 in cash and was ready to buy. So instead of selling 2 guns last night, he sold one. I guess I won't buying anything there in the future either. What really bothers me about it is: Does he treat people buying their very first gun this way too? Not good for our sport. Anyway, now that I'm done venting, have any of you all had any experience with the Ruger American Compact yet? After my experience last night, the Ruger SP101 is looking pretty good.
Click to expand...

Have you looked at the CZ RAMI. It's the small version of the cz 75 which they do make in compact. But the RAMI is ultra compact concealed carry. All steel gun internal slide rails. If you seen any of my other way older post about it. It's my new favorite pistol. its got the old Sig sauer quality for 1/2 the price. There a little less common in finding a dealer but there a excellent firearm. I didn't say anything before cause I thought you were dead set on a ambidextrous weapon which the cz 85 is, ambidextrous version of the cz 75. But before you buy. Look at one. Feel it in your hand. You'll know what you are looking at when you see one. I'm a Sig Sauer armorer, grew up on a Sig shop with my Dad. But I no longer recommend them. When they moved the production from Germany to new Hampshire the price went way way high and quality dropped significantly. Pains me to say it. But it's true.
Last edited: Oct 29, 2016
S 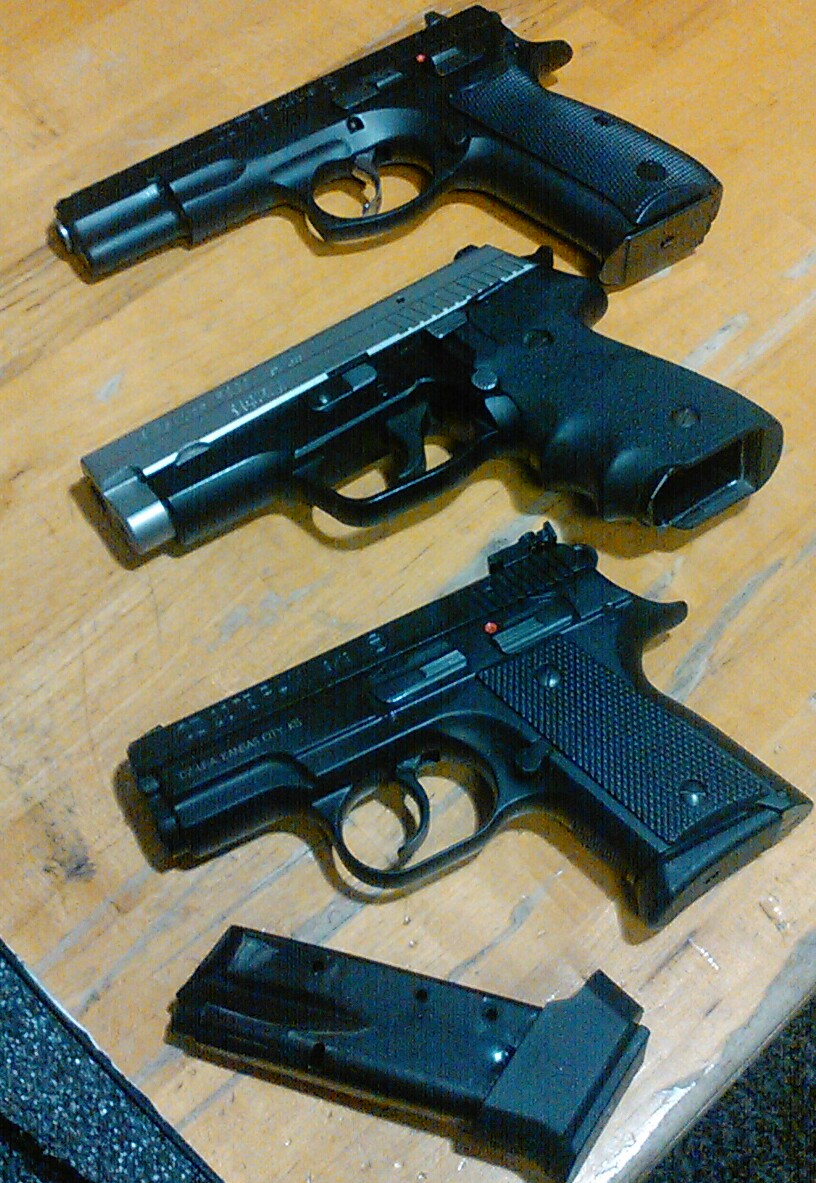 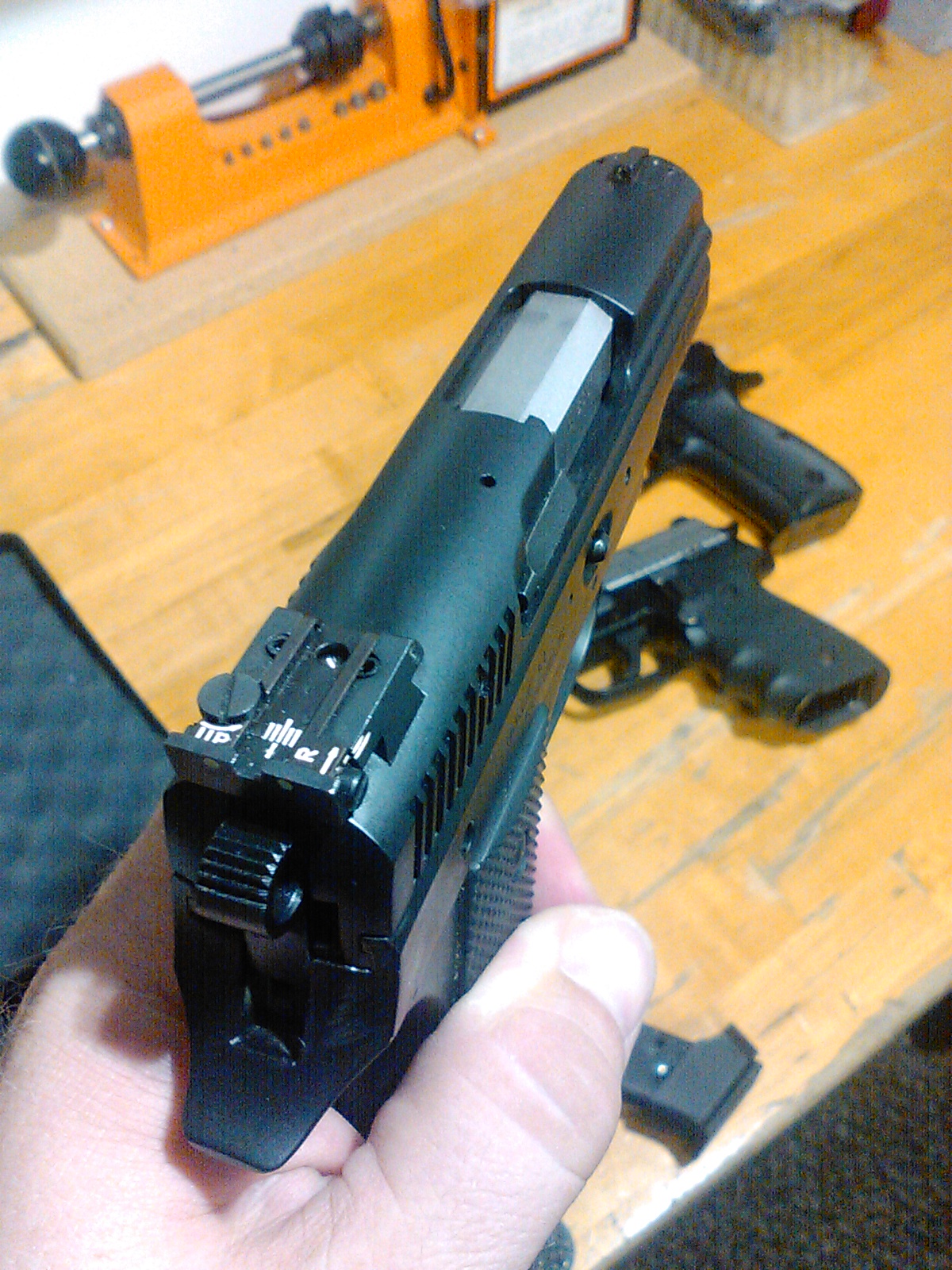 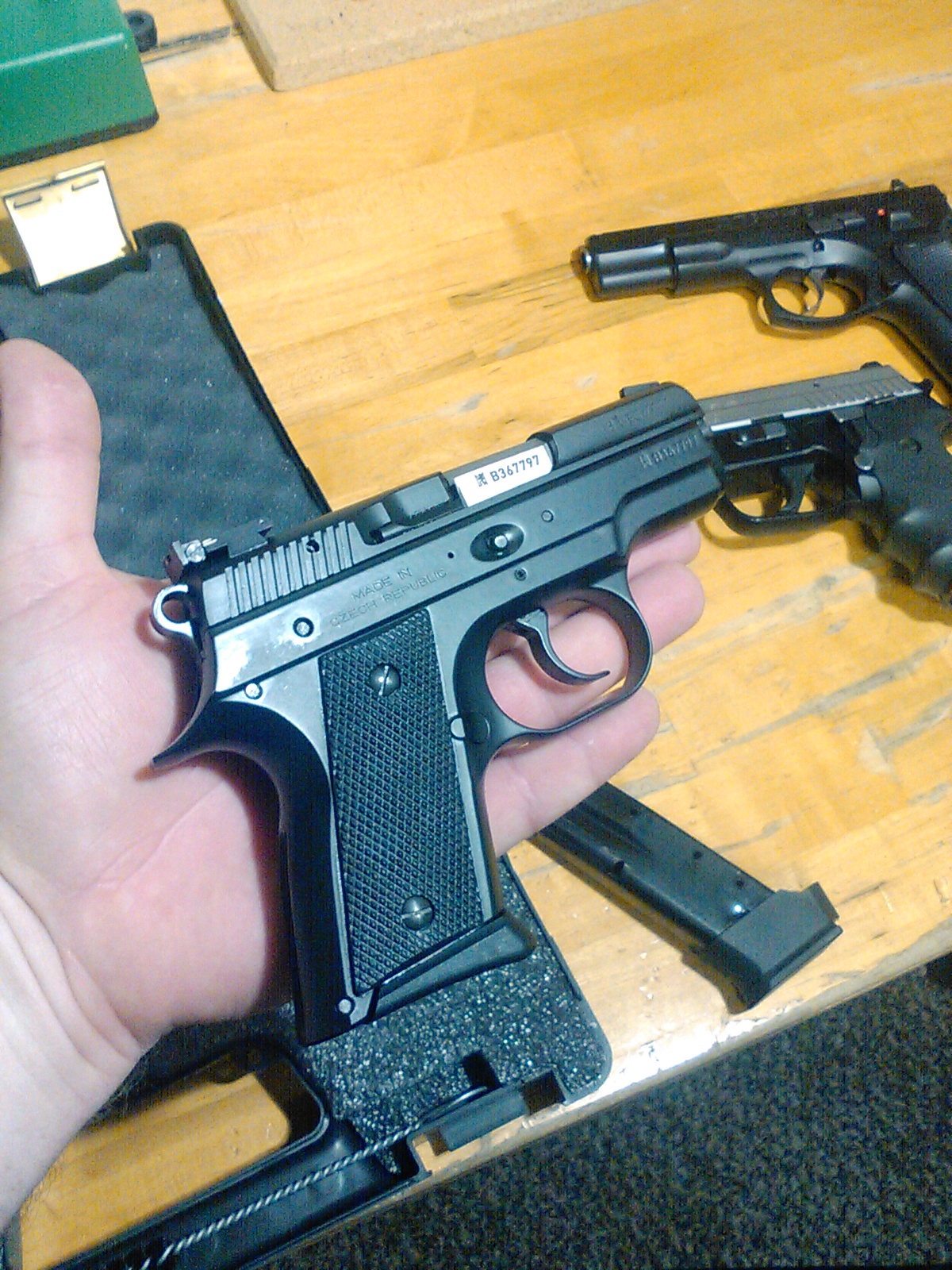 green papaya said:
I found this nice Vietnam War era GI holster set with web pistol belt & mag pouch to carry my home defense M1911A1 at home or while at the range for my side arm.

Really cool by the way
S

So I had a very interesting day. Went to go see a cz52 at 8am after I dropped my wife off at work. I get to the house and the guys a 86 year old German machinist who was a Hitler youth and spent 2 years in a Russian gulag after the war he immigrated to the US and enlisted in the army and was a tank engineer. Then was head engineer for Westinghouse in Chicago in there circuit board division. I stayed there all day till 5 o'clock till I had to go pick my wife back up. I made a very dear new friend today and had a magical experience. He has 6 no good sons and said he ain't leaving them nothing. We also made a deal on his lathe. Check out the box he made for these guns. I will treasure this stuff forever. Just wanted to share this with you guys 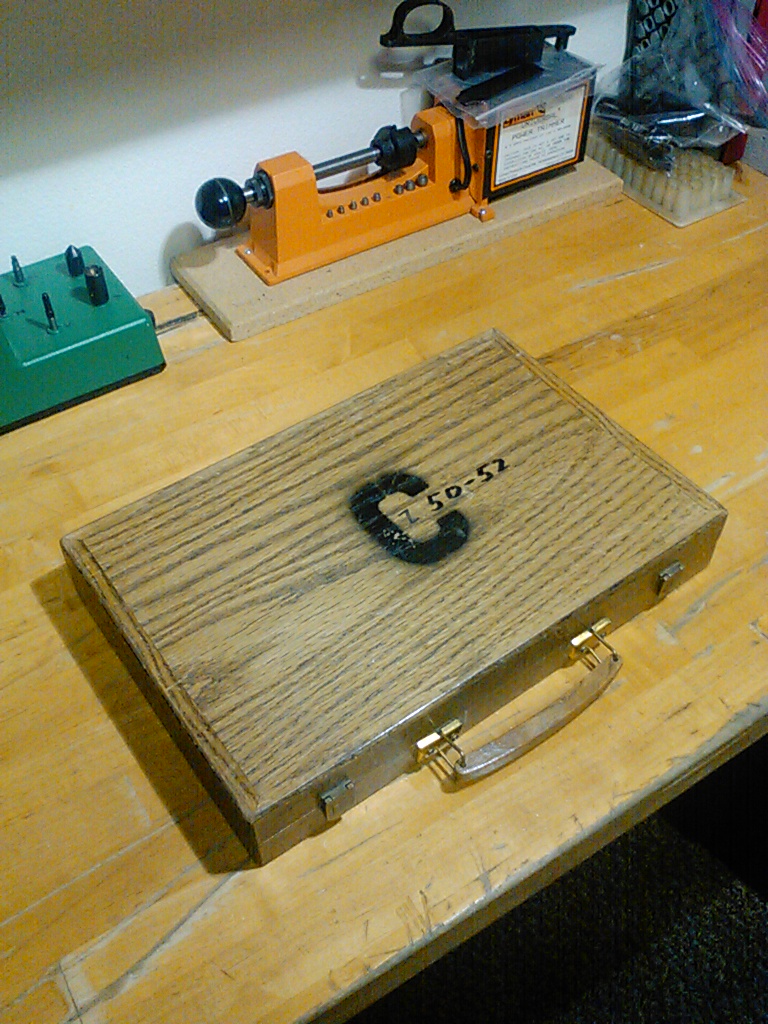 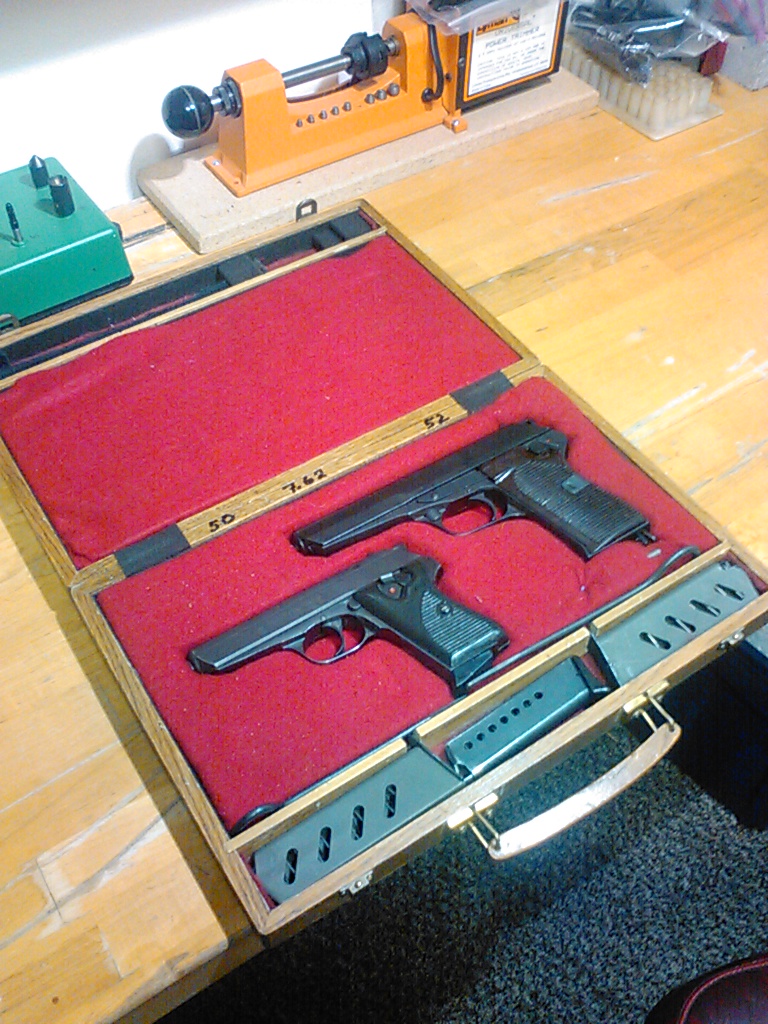 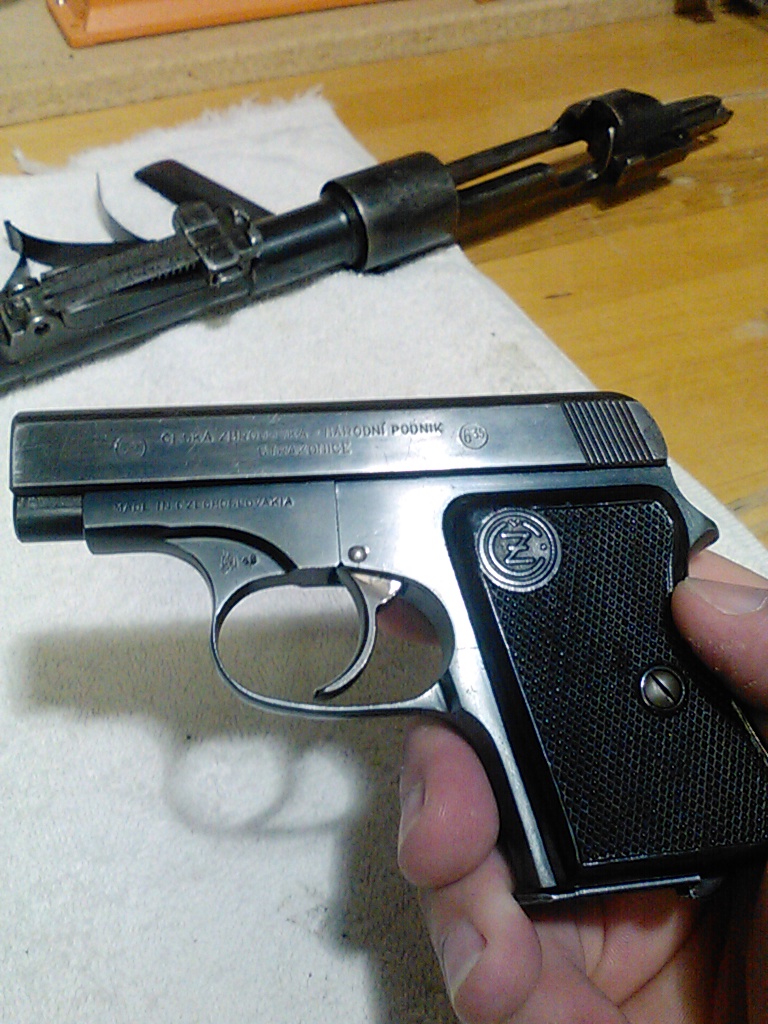 So I picked up a few over the last few days. Election rush ! But hears one I've been on the major hunt for VZ 45 in 25acp dated 1948 in excellent condition 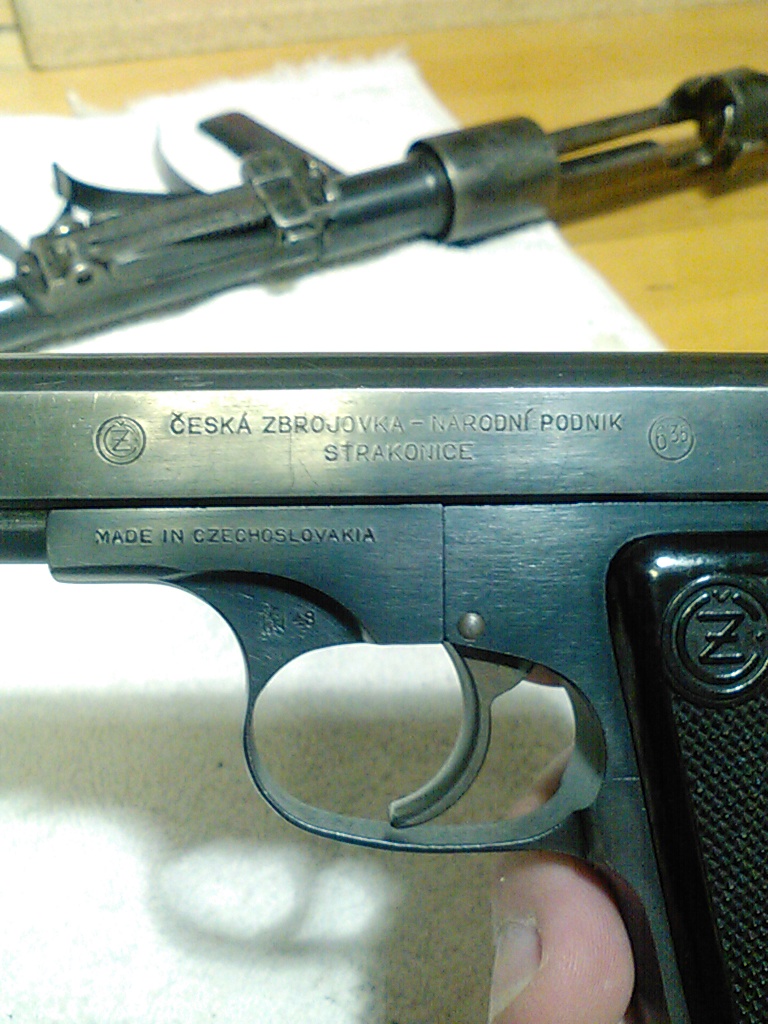 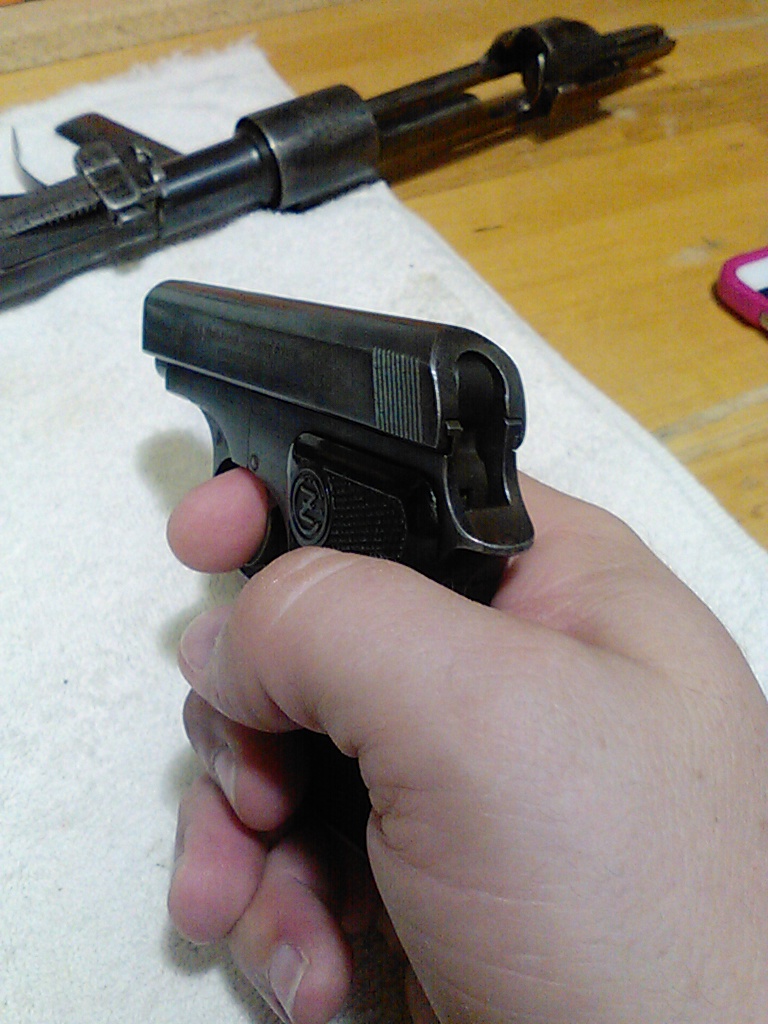 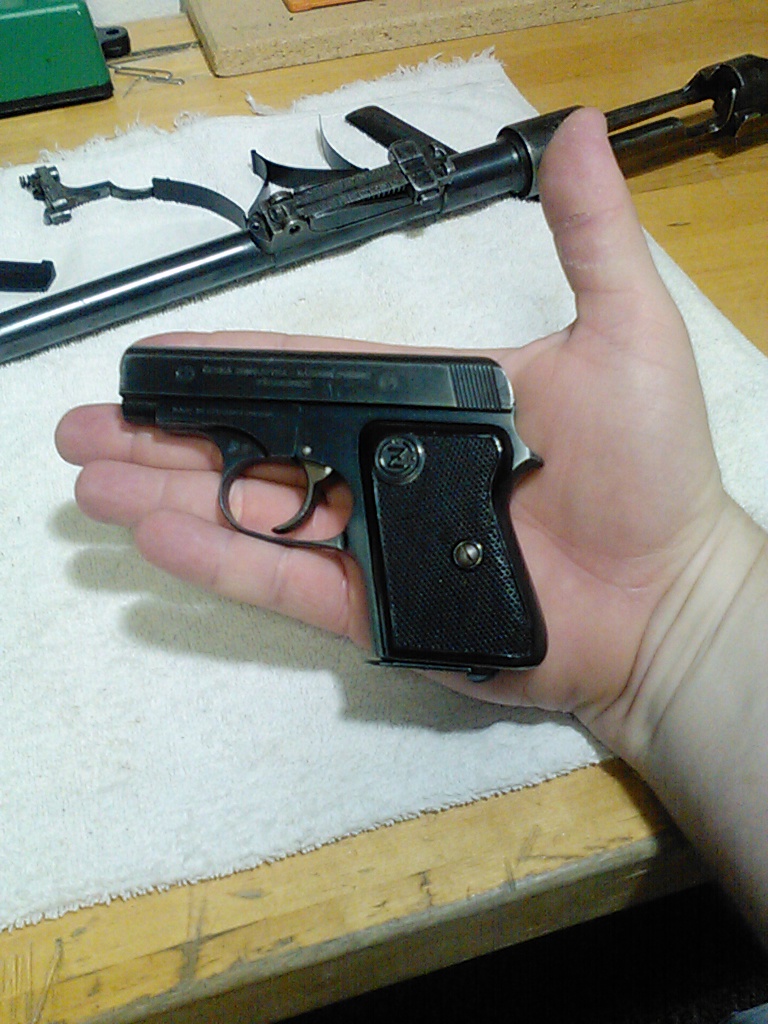 Great looking piece. I can't get over the adjustable rear sight on such a compact piece. I'd definitely be rounding the corners if I planned to carry it much.

Bamaboots said:
Great looking piece. I can't get over the adjustable rear sight on such a compact piece. I'd definitely be rounding the corners if I planned to carry it much.
Click to expand...

I agree that it is a great looking pistol. I am betting the adjustable sight was put on to score import points with the ATF

Surf, that is a sweet looking pocket pistol. Thanks for sharing all of the CZ photos. I may start having to give those some serious looks and see about adding some to my collection.
S

Kirk H. said:
Surf, that is a sweet looking pocket pistol. Thanks for sharing all of the CZ photos. I may start having to give those some serious looks and see about adding some to my collection.
Click to expand...

You won't be disappointed. Like I said if you see one in the shop. Pick it up. Feel it in your hand. Field strip it and look over the parts. Then look at the price tag. It will sell itself.
Last edited: Nov 5, 2016
You must log in or register to reply here.