Finding leather blood chits for an A2 flight jacket

Hey everyone, I decided to buy a cooper a2 flight jacket on ebay and I want to make it into a chine Burma flight jacket from ww2. I'm having trouble finding a good leather blood chit for the jacket, and I am wondering fi any of you happen to know where I can find a good priced leather blood chit thats not 200 bucks? I saw an old thread on here but the websites were closed

Hi Rustles,
Well... Funny enough I've been through this search, and may be able to help.
So, I looked far and wide and corresponded with a number of people. I ended up ordering a leather Blood Chit from Sean Collins (milstuff1967@gmail.com). He is US based and does all the leather patches and Chits for the big guns; Eastman, Bill Kelso and the like.
His work is top notch. My chit is 8x10", layered, and his wife even hand wrote the Chinese symbols. He can do variations based on pics, as originals also varied.
In fact, I just ordered a second one
My ELC M442a with leather AVG chit, the quality and authenticity is second to none... and not too badly priced. 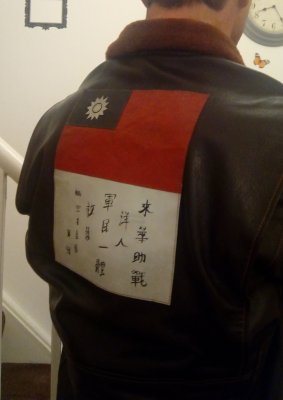 I tlaked to Sen a few years back about getting some AVG work done; I must get back to that project. I have one of his leather AVG patches and it is outstanding. Also worth noting his Chits use the period correct Mandarin symbols, rather than the later, state-revised simplified Mandarin characters that were brought in by the state in the Mao era. Not everyone gets that right.

Thanks guys, also for the blood chit, what shoulder patches would fit with the jacket? I want to match how ww2 jackets were back then 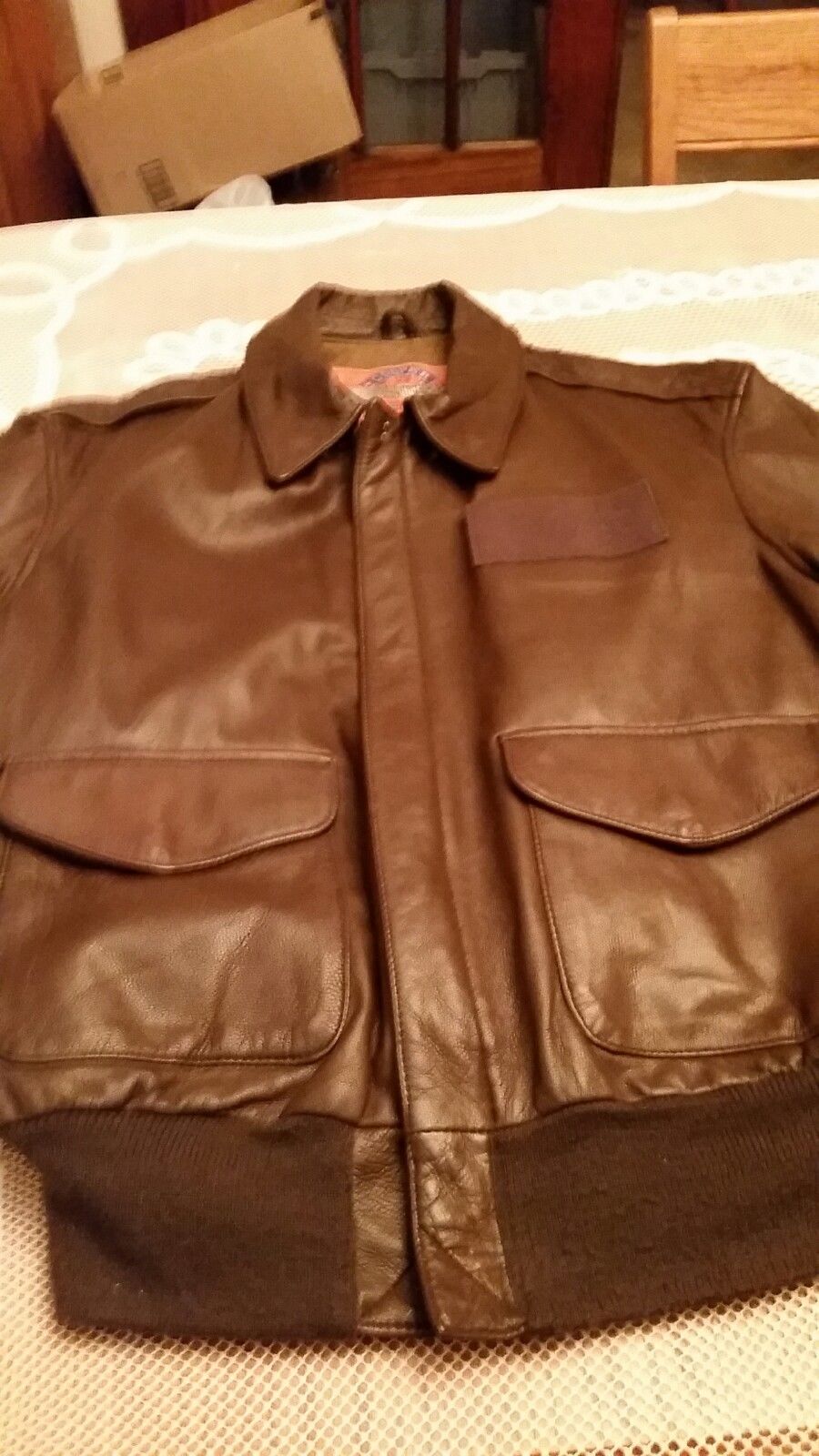 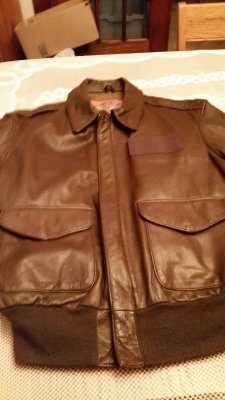 Also this is the jacket i'm gonna use, I know how to take the velcro patch off on the front

My advice would be to look at a lot of original photos of the AVG. Most had Chinese cut and painted leather 'blood chits' sewn to the back of their M-422a's, only. Other 'patches' aren't in fact patches, but names and insignia painted directly onto the jacket.

I live in Japan, and read, write and speak Japanese, so when I go back home and see some guy in a bar with the Japanese word for 'refrigerator' tattooed on his arm 'because it looks cool' even though he doesn't know what it means, it's pathetic to me. So a couple of years ago when I was thinking of getting an AVG jacket, I contacted Sean and asked him about his blood chits (so I could make sure they were accurate, and not just 'kinda like' the real thing), and the guy just went ballistic. His wife is from Thailand, so her Chinese is 'perfect' (I know, didn't make much sense to me either). When I asked him if that was modern or pre-Mao Chinese, he started throwing the F-bomb at me.
And then I had demented Diamond Dave piling onto me as well on Sean's behalf calling me 'mentally ill' and such. He's still at it today. There's no way in hell I'd let these people know my true name, address, credit card info etc.

My advice would be to contact Josh's Flight Jackets, ask to see examples of his work, ask him about where he's getting his Chinese from.

A lot of this stuff was 'Theatre' produced i have been led to believe, so why not make your own from whatever materials were used. Cut up an old jacket or sofa, couch, settee call it what you will(does it have to be horse?), paint it the base colours and find a wartime picture on the net with the writing. Next show the writing to a person that can read Chinese and ask them to tell you what it says's, get a second opinion to make sure their translation is similar to what you expect. Find a writer who will copy it in paint and there we are.
I have my own method but ask about how to age it a little(The whole piece) but not the swirly dirty paint style favoured a few years back.
It should look fine. Well for what they charge for these things I would have a go myself were it mine.

Hi Rustles,
As the gents above has said... AVG - the original guys wore mostly plain M422as, some had Blood Chits, some guys painted unit insignia on chest (left) as war raged on... 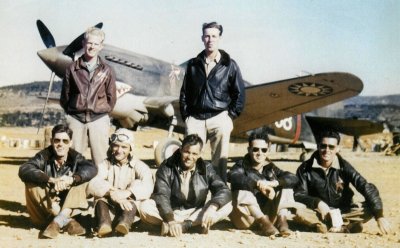 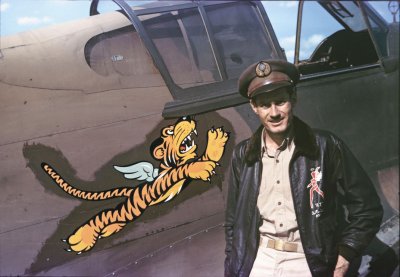 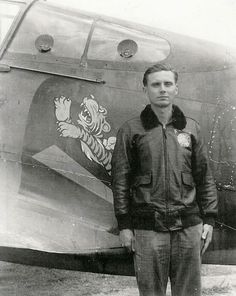 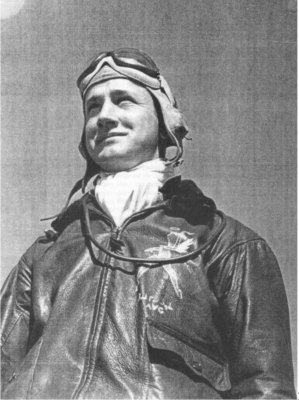 14th AF - Have a look at Eastman leather's website. They have a 75th FG HLB which will show a great example of 14AF patches.
Usually on the shoulders, some had chest patches, some a blood chit. Not all. 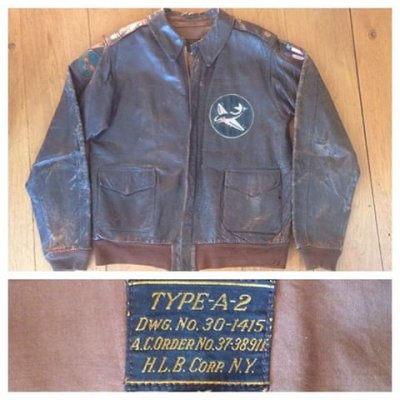 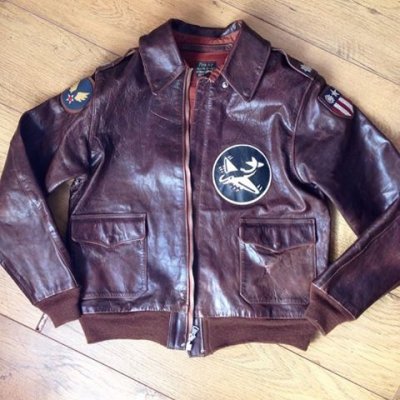 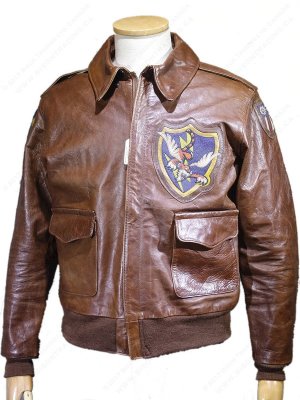 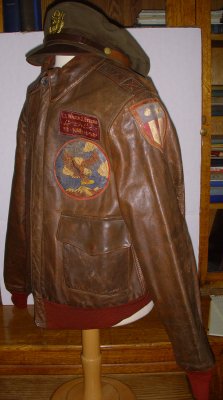 There are some great examples of patched and painted jackets from other theatres also, just don't combine them
As said above, do some research before patching, get it right.
ps an excellent resource: http://www.cbi-history.com/part_ib.html
Last edited: Dec 7, 2017

Aero had and probably still have a large selection. I have had 2 sets of the Burma Bridge Busters sets, an early AVG all leather blood chit, a pair of gorgeous embroidered Nationalist Chinese wings and a painted leather unofficial AVG flying tiger. All very good, try dropping them an email with what you would like.

The AVG jackets in reality were much like A2s, the majority having little, no, or limited artwork. Much of what we think of now as the typical AVG jacket is more a tribute / souvenir style of jacket that came along a bit later. Whic his fine with me for what I want, just not quite what you might be after if you want full historical accuracy. Unsurprising, really, that the actual AVG jackets weren't as heavily decorated, bearing in mind how short a period it wasx actually in operation before the US officially entered the war and those men were recalled to the USAAF.

You know what really gets me about the AVG?
Jacket fits.
Years back I posted the one picture I ever found of an AVG pilot whose jacket looked like it fit him, in EVERY OTHER PICTURE I HAVE EVER SEEN, included those posted above, it looks like no matter what size a guy was, he was given a size 48 M422a.
I wonder if when the AVG was established, the guy in procurement was told to order the pilots jackets, and he said 'What sizes?', and his boss said 'How the hell should I know?', so he just ordered like 100 jackets in size 48 coz then everyone could wear them.

LOL. That is the premise I used to work on, room for a couple of belts of 7.62 mm MG ammo down the front of my smock.

@the Seal Brown Knight,
You're making me think of those 2 Para guys who used to wear massive combat jackets so they could wear their flack jackets underneath them to look even more intimidating in N.I. back in the 70's and 80's!

Same idea, I am a fairly chunky guy so I got to carry the good old GPMG a lot. Couple of spare belts, smoke grenades in the pockets and you soon looked like a camo version of the Michelin Man. 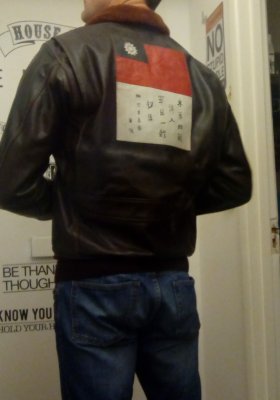 Here's a painted-on-leather one I just saw - marked as sold - but still, a very fine example and different to the usual styles.

Like you, Big J, I find the whole obsession with Chinese writing for tattoos a bit bemusing. Apparently Britney Spears got one and she had wanted and asked for "Enigmatic" and she got one that says "Weird".
I had an ex that loved tattoos. We split up but she continued to hang around as I took her dog off her (what can I say? The right bitch stayed) - and she got yet another tattoo and was insistent on showing me. Chinese writing. And I said "Oh. It says Stir Fried Beef with Broccoli".
That got me the f-bomb too.
Last edited: Dec 8, 2017

@Brettafett, that's a nice jacket, but I know what you mean about the sizing! There's no way I could get a sweater under mine!

@Stand By, that's a nice variation patch you've linked there. I like the writing- literally looks written rather than painted on, like someone making it quickly.

Also, yeah, if you need a friend, get a dog! Never a truer word spoken!
I love Japanese traditional tattoos. I love the way they reference 1700's and 1800's woodblock print ukiyoe, with Koi, or tigers, or dragons.They really are beautiful and artistic. If I lived back home, I'd probably go for it, but here it'd be just as much a liability as having KKK tattooed on my forehead would be back home. It's a pity that they have the gang association, they are very artistic.

I also have an affinity with Japanese culture. As someone from the creative fields*, I certainly appreciate their art and aesthetics... They get right into the detail and spirit of things, without the fluff... Would love to visit one day. (*I guess thats why I am pedantic about the details... so for patches, chits and jacket art... for me, if its done, its gotta be done right...) Comment about a dog... ++
Again, lol

I'm just not cool enough to rock a tattoo. I don't have the hunky build and I have that Celtic skin that's so white, my legs are almost an iridescent silver/blue in winter! Heck, I'm the guy who starts to burn when it stops raining! Not a particularly cool canvas for that. And I'd be too worried about changing my mind in years to come about what ink I had done. Nope, just not me and I'm okay with that.
And it's because I can't put a tattoo on me that I opt to put patches or artwork on a jacket instead! It's the closest I can get and I'm okay with that too. But as Brettafett says, it has to be just right!!
You must log in or register to reply here.
Share:
Facebook Twitter Reddit Pinterest Tumblr WhatsApp Email Share Link