I have to amend my original post as well.

This Freewheelers Bodie jacket is easily my all time favorite now, though I will admit that the Sunset is a close second all time. Honestly, the deerskin being a common factor is no fluke. I really love deerskin with a full cotton flannel lining.

The Bodie really only wins out because I bought it after I lost weight and because it fits a little wider in the chest and shorter in length compared to the Sunset which I prefer. 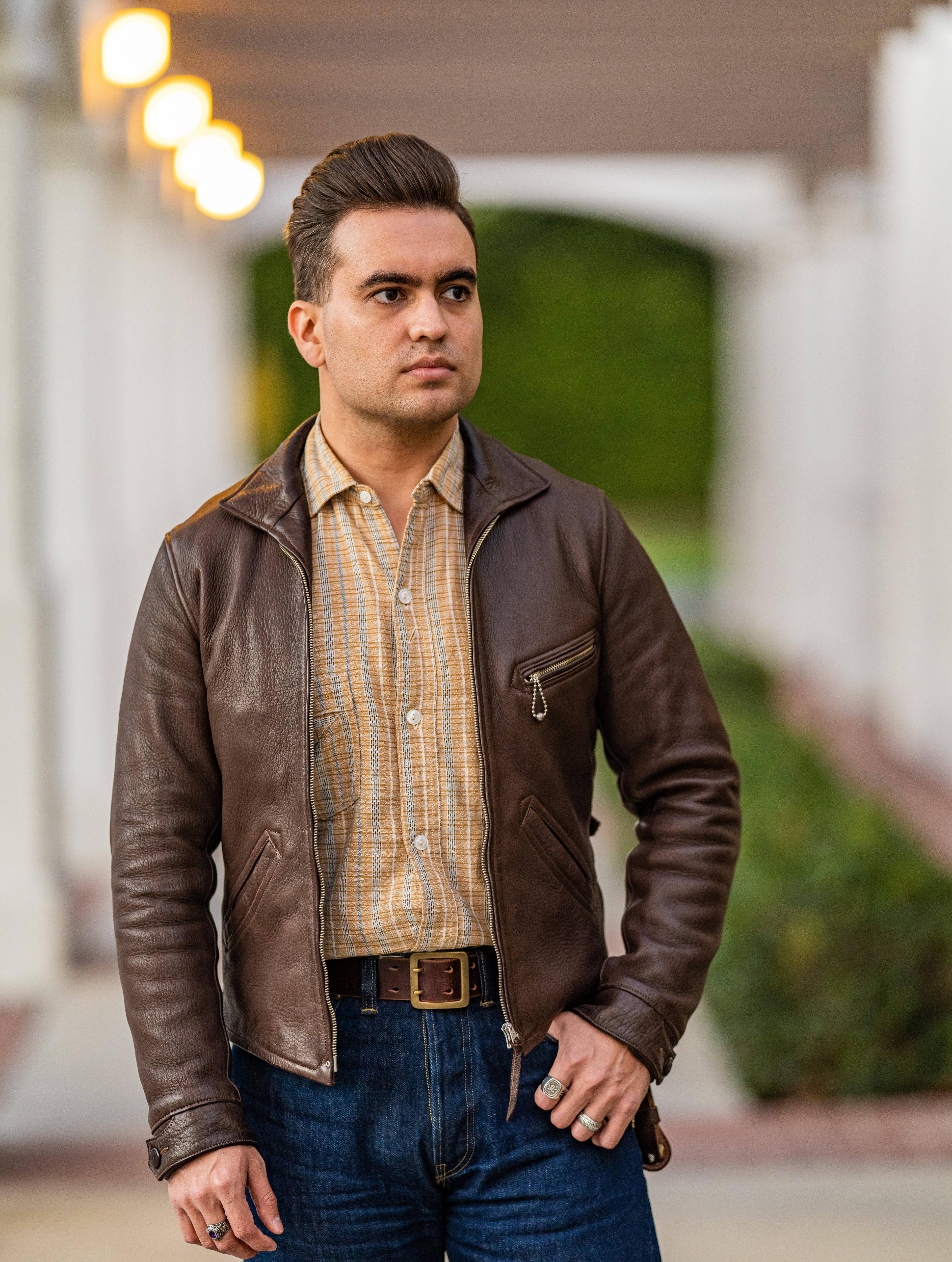 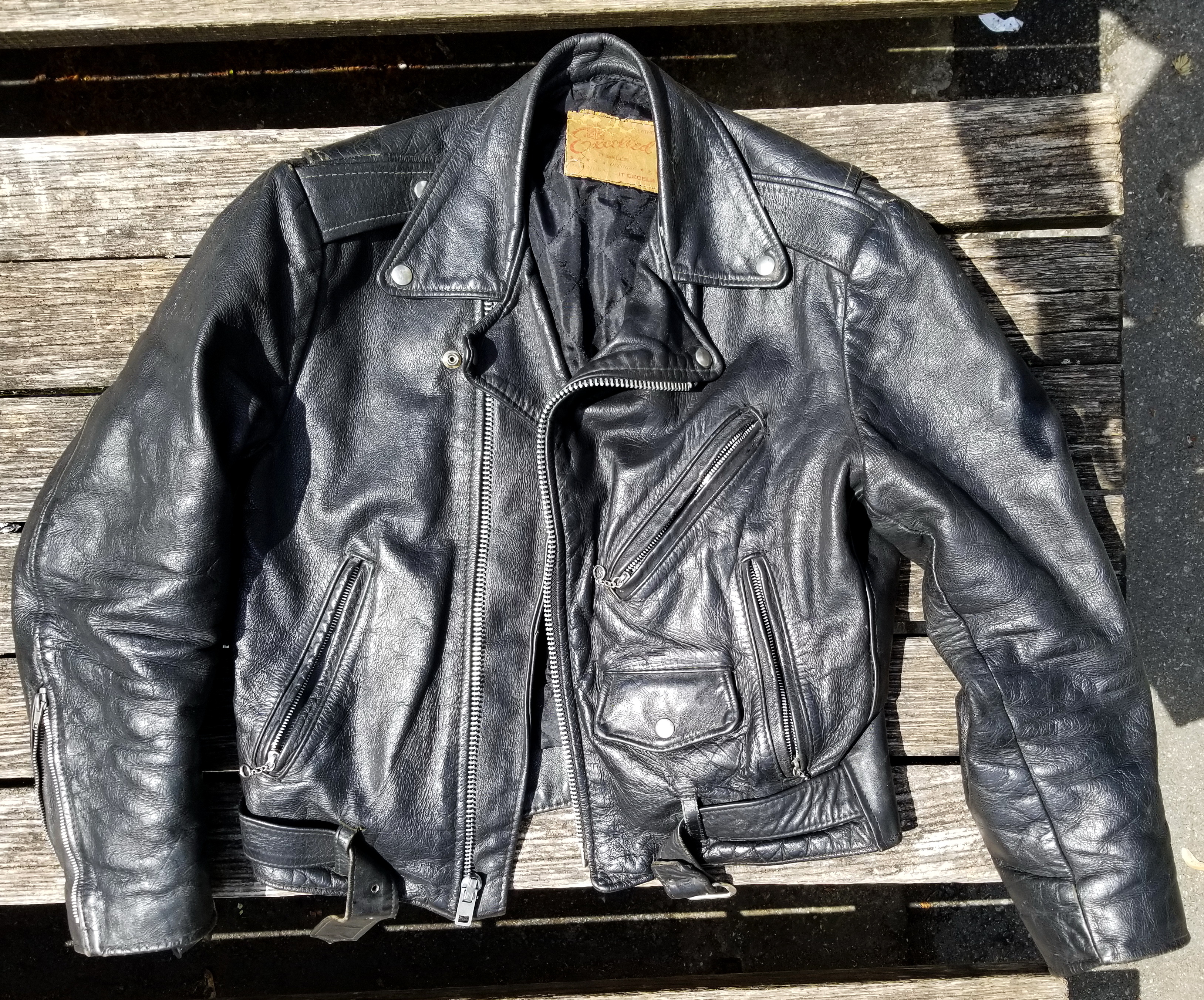 First post on the forum so hi to the whole community !

My favorit leather coat has always been the mythical one and only Perfecto.
I'm not a rider but as a long time rock, hard-rock and heavy-metal fan, the Perfecto has been my uniform from my 14 or 15 years old to my 25.
At the time, Schott was out of my reach and I was happy to wear chip copies while still dreaming of the real one.

Now that I'm closer to 50 than to 20, I'm still liking that double rider and discovered only a few years ago that in fact, there is not only a perfecto but dozens of modele from Schott and many different fits...

Also funny to see that in the 90's, we were wearing them quite loose and long dispite that modele was made to be short and fitted.
K

Marc mndt said:
I need to review this post. The Thedi has switched places with my Field Leathers. Not because the Thedi has fallen out of grace, it's still a great jacket and I love wearing it. But I just don't wear it all that often.

My grab and go all purpose jacket is my FL so I think it deserves this spot more than the Thedi.

Windward is still #1. That jacket is irreplaceable. So if my house would be on fire and I could only grab two jackets, I'd grab the Windward and wear the FL.

Marc mndt said:
I need to review this post. The Thedi has switched places with my Field Leathers. Not because the Thedi has fallen out of grace, it's still a great jacket and I love wearing it. But I just don't wear it all that often.

My grab and go all purpose jacket is my FL so I think it deserves this spot more than the Thedi.

Windward is still #1. That jacket is irreplaceable. So if my house would be on fire and I could only grab two jackets, I'd grab the Windward and wear the FL.

Mine has always been the Aero B6. I sold my original one after I gained some weight. Ended up going awhile without one and finally gave in. Bought the replacement last fall. If I could go back to 2014 I’d tell myself not to take pics in my bathroom, Lol. Nowadays I only wear these 2, not because I dont love the others but only vegtan show visible evo with wear, the others would look the same for decades to come. I hate to say it, but if I had to choose one jacket today, it would be the 5* 2 mm thick HH Halfbelt.
How good that I don't have to choose *lol*.
W

MrProper said:
I hate to say it, but if I had to choose one jacket today, it would be the 5* 2 mm thick HH Halfbelt.
How good that I don't have to choose *lol*.
Click to expand...

You're killing me. Mine has left Pakistan, hopefully it doesn't meander too much en route.
B

Awe hell. I swore I was done buying after the last couple of scores, but crap, some great jackets here guys.

regius said:
I think my all time favourite is a black Sears Oakbrook civil A2
Click to expand...

Thedi ALL THE WAY. I can't pick just one

My Aero black HH Hercules is my favourite all-weather bulletproof jacket for the wintertime.
I got it in 2015 and the leather is now very easy to wear, second is my 2014 Highwayman. I regret that I don't have a personal photo of my favorite leather jacket to share here, but I found an old Vanson catalog with the same model jacket pictured and will post that. The jacket was a mail-ordered Vanson Bandit, a model since discontinued, made with Vanson's old and WONDERFUL black CW steerhide and chrome color hardware, as the catalog photo also shows.

The Bandit was a more off-bike version of Vanson's CHP jacket, which had black-painted brass snaps and eyelets and brass zippers instead of the chrome. Though it retained sleeve zippers, the Bandit also differed by omitting the classic CHP's 2-front/3-back snapping belt loops--again, because the belt wasn't needed to help keep cold air out on a more walk-around jacket. However, the Bandit retained the CHP's side lacing gussets and leather-lined inside pocket. I ordered my size 42 Bandit in the early 1990s, apparently during a great time in Vanson's production ability to source great waxy/grainy/crinkly/supple CW leather.

On account of its ideal fit, uncluttered design, sleek looks, deep-enough hand pockets, and--most of all--its terrific leather, the easy-to-just-zip-on Bandit quickly became my favorite. Eventually I began to put on weight and had to upsize to size 44 and then size 46 jackets and so then the Bandit spent most of its time in storage and I eventually gave up hope of ever fitting into it again and gifted it to an acquaintance about a decade ago.

About five years ago I discovered the Paleo Diet, lost 80 lbs. in seven months, and found myself back in the size 40-42-44 jacket range once more. Remembering my Bandit jacket and having enough money at the time I phoned Vanson and spoke with Kim (great gal) there about having another size 42 Bandit made up for me custom, which they were willing to do though it had been a discontinued model already for years by then. I had become aware of Vanson's change of CW steerhide to the new and 'plasticy' stuff--I'd been sent a swatch shortly before--but went ahead with my custom order anyway in the hope that there might be some variation in the leather and that my jacket might turn out more like its predecessor.

Well, it didn't. And I really couldn't blame anyone but myself because in all fairness Kim had apprised me of Vanson's problems sourcing the same quality of CW leather as before due to their nearby tannery closing, etc.

When my custom and authentic new Bandit jacket arrived about 3 months later it had been well-constructed but it had the same stiff/plasticy new CW leather that was just awful and the jacket didn't look right, hang right, fit right, feel right, or even SMELL right. The leather was, seemingly, halfway to LINOLEUM. I tried the jacket on just once and immediately decided to look for someone to proxy-sell it for me on ebay, which is what eventually happened. My disappointment continued every time I saw the jacket on its hanger awaiting shipment to be sold for me and I was rather happy and relieved to see it go.

What I learned from my 'replacement jacket' experience was that, at least for me, the 'soul' of a great leather jacket is the leather itself and that, without it, the other features of a jacket, though important, are rendered even more obviously secondary. If it's true that 'the clothes make the man' then in my case I guess it's also true that 'the leather makes the jacket.' There are times when you can still go home again but other times when you can't.

Just the two I currently own.

This one means a lot to me. 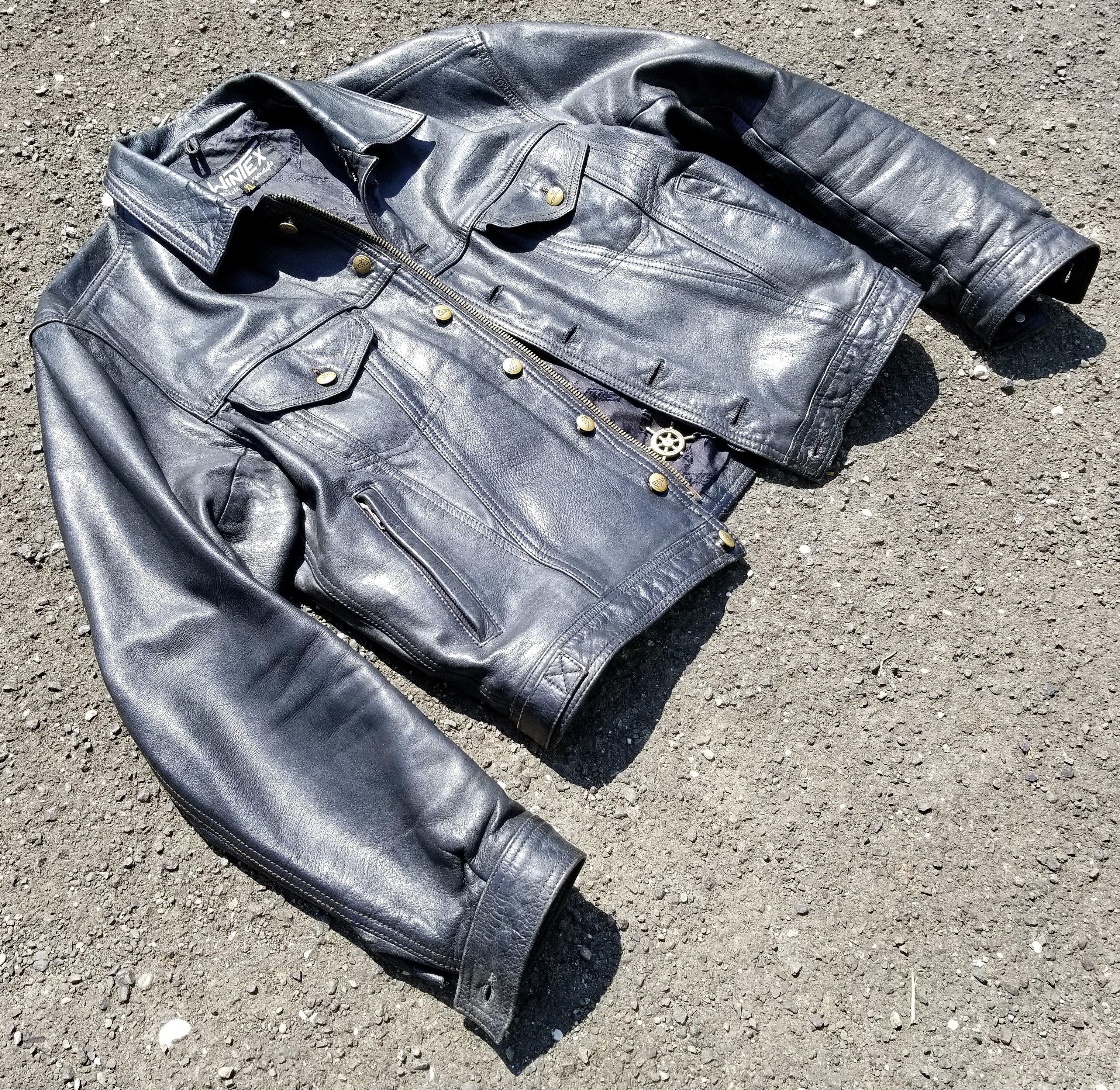 Turnip said:
Just the two I currently own.