To beard or not to beard?

Suits you well. And as other said, if the lady is ok with it, keep it! Took some times for my girlfriend to get used to it, but now, when we look at pictures of me without it, she said I looked like I was 16

The day after I shaved the wife told me I need a hair cut and to grow some scruff back. So there you have it. Looks like I will not be shaving for a while Thank you all for your input.
So where is that picture form RBH?
Johnny
Last edited: Dec 12, 2014

To answer for Rusty, Johnny, that looks like Warren Beatty in "McCabe and Mrs. Miller." Good movie, by the way. Great images. Compelling characters.
F

To Beard, or not to Beard, that is the Question:
Whether 'tis better for appearances to shave
Off the facial evidences of manliness
Or to bask in the magnificence that is Hirsutity.

For you, I say Beard. It simply looks better on you.

Nice beard and stache... You look good either way...

I've had just about every iteration of facial hair there is.

My (current) wife does not like facial hair at all, so I am bare faced, probably for good.

Frankly, I've always looked better with a beard than without. I'm too babyfaced when clean shaven, and frankly everyone I meet thinks I have a nice beard. Just gotta remember to keep it trimmed.

Let's breath some new life into this thread - I decided to let my beard grow out this fall and when I hit the one inch long mark I realized I would need to start using beard oil to keep the whiskers tamed and soft. Any others here use beard oils or balms?

Oh man, it's a wonderful dialogue:

My husband uses balms and oils from Badass Beard Care.

You can always join a club: 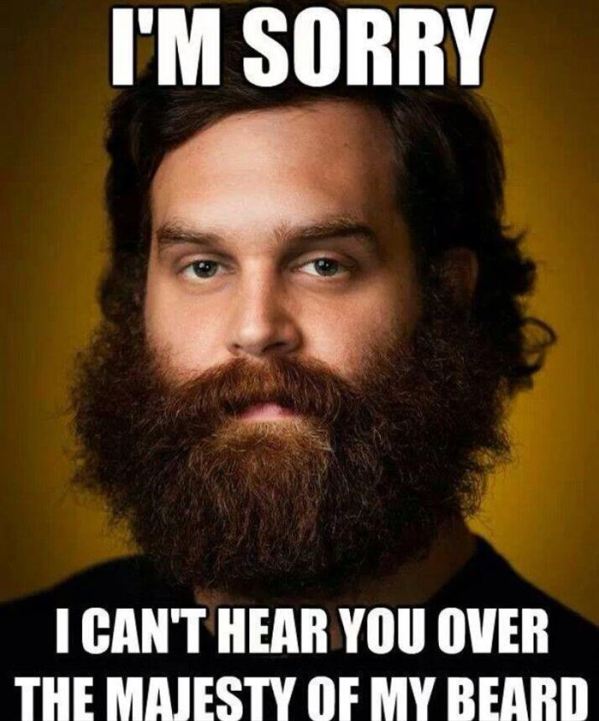 It seems to work, Mike!! You have one of, if not THE best 'stache anywhere! Had a beard for almost 40 years. There's a largish mole to the right side of my chin, the skin around it is very thin and susceptible to the razor, times I've discovered, too late, that the mole is bleeding. Ruined many a good shirt. On a visit to my doctor I asked if it could be removed. He advised not to, apparently removing a mole can create hormonal release, it should be avoided. "Why don't you grow a beard?" asked my doctor. Crazy as it sounds, I hadn't thought of it. That beard was kept trimmed crop close, had it done every two weeks, same time as my haircut. Never a murmur from the missus, well sometimes, but I'm not going to go there.
Forty years on and the beard is akin to a Santa impression, the vanity in me, preferred the mole to the silver whiskers. I would still like to get rid of the mole though.

I've had some form of mustache and goatee or beard for the last three decades, and intermittently for 6-7 years before that. One employer in the early-1980s required I be clean-shaven, and constantly asked if I had shaved that morning when my "five o'clock shadow" appeared at 10:00 a.m.. Initially I grew it attempting to look older, but as I rapidly approach my 56th birthday I'm quite sure that ship sailed long ago and there is probably an even worse horror show beneath the beard these days. To quote ZZ Top guitarist Billy Gibbons, "The prospect of seeing oneself in the mirror clean-shaven is too close to a Vincent Price film…a prospect not to be contemplated..."

Mrs. Zombie has tolerated the changes in facial hair well over the years, but to my dismay has made it very clear that she does not like long beards and will not tolerate one on my face. As has previously been stated, "If mama ain't happy, nobody's happy." So I do what I can to keep mine groomed, but because it's so close-cropped it really doesn't need much maintenance aside from trimming it once or twice a week and running a comb through it as needed. I'll shampoo and condition it every great once in a while, but have found doing so makes little difference in the way it feels or looks and I've never used balms or oils on it.

I knew a guy, who when asked why he grew a beard, replied "my wife said she didn't want to see my face ".